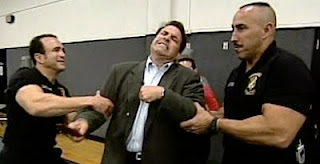 Rick Sanchez did not leave CNN Headquarters without a fight.
Security guards had to taser, mace, pepper spray and beat him before tossing
him out to the street.

(October 1, 2010, Atlanta, GA) Rick Sanchez was unceremoniously dismissed by CNN in the aftermath of some racially charged comments he'd made during a radio interview with an XM/Sirius Radio host broadcast on Wednesday. During his on the air talk with Pete Dominick host of the Stan Up program, Sanchez called Comedy Central star John Stewart a “bigot” and stated his belief that the major media outlets in America are controlled by “Jews”. The outcry over his comments was swift and loud and came from many in the Jewish community and others who support Israel. While Sanchez, a Cuban-American, was trying to make a valid point about who is and who is not in a “oppressed minority” in America, the mere mention of “Jews” in what can be perceived as a derogatory characterization, was sufficient to end his 6 year term with CNN.

Sanchez began his employ with CNN as a field reporter. Known as a journalist of “barely mediocre talents”, he was often sent out to spots far and wide to cover natural disasters such as hurricanes, mudslides, sinkholes, brush fires and locust infestations. “Rick was good at that. He would stand in the pounding surf during a wicked hurricane and not be afraid to look like an idiot. I admired that about him”, said Niles Dirley and associate producer at CNN. “Rick would do anything he was told to do no matter how asinine. He was a real trooper, a bit daft, but a real trooper”, noted Sanchez's former colleague at CNN Frank Sesno.

Some observers and experts who follow media issues see Sanchez's firing as “unfair” and as a “reinforcement” of his stated opinions. Brent Bozell president of the Media Watchdog Center commented, “Rick was simply telling the truth. Jews do run all the major media outlets in the United States in print, in radio and on the networks. For as small of a percentage as Jews are population wise in this country, they have a grossly disproportional amount of content control in the media. That is why so little truth is ever reported about the Palestinians and the fact that they are held in captive occupation by the Israeli government. God help you if you dare speak ill of the Jews, Israel, or their barbaric policies”.

Other critics point to some of the outlandish rhetoric that pervades the cable news airways on networks such as FOX and MSNBC. Professor Floyd L. Phungall, director of Media Studies at Central Lower State University in Blemish North Dakota said, “Glen Beck has called President Obama a 'racist' with a 'deep seated hatred of white folks' while on FOX News, and that pompous moron, Keith Olbermann on MSNBC was brutal in his commentary during the Bush Administration. Still those 2 scum suckers still have jobs”. Professor Phungall continued, “The vitriol on the TV these days, on talk radio and on the so called cable news channels is stunningly low brow, vile, irresponsible, and just plain cruel. Sure, is there a modicum of truth embedded within some of that kind of commentary? Of course. But, when Limbaugh, Beck,or that total idiot Hannity, Chris Matthews and Olberamann get their audiences whipped up into an irrational frenzy over non-issues, who is there to reign them in”?

Some well respected media commentators have kept quiet and are waiting to see the fallout from the Sanchez dismissal before entering the debate. One such expert affiliated with the University of Pennsylvania Annenberg School of Journalism, speaking anonymously noted, “Perhaps this Sanchez matter will generate some honest debate at the highest levels in media company board rooms across the country. The last few years has seem a dramatic and rapid decline in both the quality of what they bill as 'news shows' and ' serious journalism' . What they have surrendered to are the ratings, advertising revenue, and the lowest common denominators. They play to the ultra extremists on the left and the right, inflaming base passions, inciting anarchy and even violence. FOX is the tool of the Tea Party movement while MSNBC is an arm of the Deomocrats. Neither of these outlets or the outcasts, rejects, have-beens, and never-were's they employ truly air anyting close to “news”. They are entertainment shows using carnival barkers, village idiots, town criers, and just plain old talentless, brainless, egotistical assholes. I do not consider any of these networks to be serious nor can they be taken seriously by the public. The really do a great deal of damage and hurt the democratic process by spreading false information, propaganda, and tripe”.