GUESS WHO CAME TO DINNER? 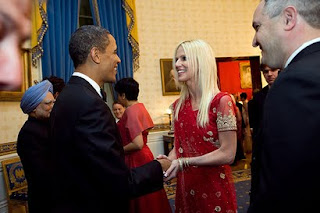 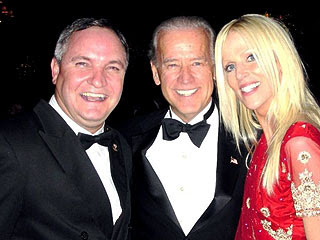 Photos that should send shivers down the collective spines of the Secret Service.


(November 26, Washington, DC) Two uninvited guests sashayed their way into the White House State Dinner here on Tuesday nights before the flashing cameras and TV crews filming. Once they had passed the external “security” check point, they proceeded into the White House where they were photographed along with all the other arrivals. The biggest difference between Michaele and Tareq Salahi and everyone else who attended the first White House State Dinner of the Obama Presidency, was that the Salahi's were not on the official guest list. That they were able to gain entry to the White House and actually pose for pictures with high ranking government officials including President Obama and Vice President Joe Biden, has left this town stunned and concerned.

This security breach is unprecedented in its audacity and success. The United States Secret Service (USSS), the agency charged with providing presidential security, has announced an internal investigation will commence to identify how these two party crashers were able to perpetrate such a brazen feat. Retired Secret Service Agent Matthew Donohue who served on the Personnel Protective Detail for President Clinton and George W. Bush commented, “The (Secret) Service has not been so embarrassed since Reagan was shot. Clearly, heads should roll due to the seriousness of the breech. Luckily, these two perpetrators were seeking publicity not to do harm. Had they intended to do harm, they could have wiped out a large segment of the Executive Branch.”

Initial reports tried to downplay the incident. The White House released statements that seemed to indicate they were minimizing the significance of having two uninvited people simply stroll into a State Dinner. Now that numerous photos of the two intruders with President Obama, Vice President Biden and White House Chief of Staff Rahm Emmanuel have emerged, it is hard to deny that this breech could have been disastrous. “ What if these people had evil intent? What if they were infected with a lethal virus and were sent in to infect the President? It is difficult to imagine what could have happened. Yes, the metal detectors would have caught any conventional weapons they may have tried to secret into the White House. It is the unconventional weapons that would not have been detected. You can bet that terrorists of every stripe have sat up and taken notice of this severe breakdown of White House and Presidential security”, noted Director of Security for BronxWest Consulting, Vito Amendolla a retired NYPD Captain.

Since Tuesday night, much has been learned about Michaela and Tareq Salahi. According to sources the two are “semi- reality TV stars or wannabees.” The two are relatively well known in certain social circles in and around the DC area. Tareq Salahi is a part owner of a winery with his family in Northern Virginia. Apparently the couple has been involved in some way with the filming of the reality TV program “Real Housewives of DC.” The Bravo Network which airs the program admitted that a Bravo film crew were present at the White House when the Salahi's entered. The network denies having encouraged the couple to pull off this stunt but the Secret Service has said they will “vigorously investigate” whether or not the network played any role in the perpetration of the intrusion.

What is known at this point is that the Salahi's were able to p[ass through the outer most checkpoint; the entrance for all guests which was manned by Secret Service Agents as well as the White House Social Secretary's Office staff. Despite not being on the invited guest list, the couple easily passed through the checkpoint and magnetometer. Once passed this security point, they had free access to all the areas of the White House and grounds which were being utilized to accommodate the hundreds in attendance for the State Dinner with India Prime Minister, Manmohan Singh.

The photographic evidence is damning in that the photos are stark proof that these intruders mixed and mingled among the invited guests with ease. “When I saw the picture of those tow nuts standing with Obama, I could not believe it. It is almost inconceivable that anyone could just walk in to an event at the White House and not be challenged in any way after gaining illegal entry. The Secret Service had better get to the bottom of this quickly”, commented Frank Blussner, of the State Department. He continued, “We could have had an international crisis had something gone wrong and Prime Minister Singh had somehow been injured. This is the most serious breakdown in the security and protection of a United States President in many, many, many years.”

Many security experts both in various government agencies and private enterprises have expressed dismay at this unauthorized intrusion. Many comment that in this post 9 11 age, one would think that the security of the White House would be so robust that unauthorized entry would be impossible at any time. The fact that this incursion occurred during a State Dinner only intensifies and magnifies the scale and scope of the myriad security failures that allowed two publicity seekers to crash the gates at a White House bash.

Attorney Gino Palermo of the Palermo Associates, an expert in Constitutional and Criminal Law and a resident Fellow at BronxWest Consulting said, “These two people should be prosecuted. The White House has the grounds to prosecute and bring a variety of charges. This was not a simple 'party crasher' incident. This was a State function where literally dozens of our government's highest official were present. It was also an international affair with other world leaders among the attendees. Frankly, I am of the opinion that they should be locked up right now. They should be incarcerated until a full investigation is completed. What do we really know about these people, after all? There may be more to this story than we are being led to believe. The White House and Secret Service cannot afford any mistakes and must get to the bottom of this ASAP.”

This post is a collaborative effort between The Brooding Cynyx and our strategic partners at BronxWest Consulting and The Palermo Associates.