THE ONLY THING TO FEAR IS FEAR ITSELF 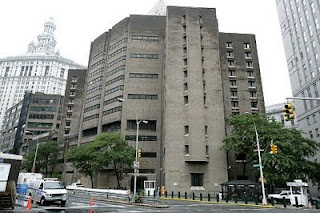 The Metropolitan Correctional Facility located across from
the Federal Court House in Foley Square, Lower Manhattan.


(November 17, Foley Square, NYC) The hardest core right wingers, neo-cons and GOP hawks are proving to be what they have long been suspected of being – fear-mongering cowards. Their near apoplectic reactions to the thought of having some of the Guantanamo Base prisoners transported to and incarcerated in American prisons reveal the true colors of these ignorant people and that color is decidedly yellow. For such tough talkers who had been rabidly gung ho to support the Cheney / Bush war of choice in Iraq and send others to die for their ideology, they look petty and weak in light of their criticism of the Obama Administration to try several of the “detainees” in Federal Court. Most of the loudest, staunchest hawks never served in the military. Morons like Dick Cheney managed to avoid service in Viet Nam remaining securely on American soil compliments of five, yes five, deferments.

The controversy resulting from the Administration's decision to try Khalid Sheikh Mohammed (KSM) and four other “enemy combatants” in New York City and to possibly transfer many of the remaining Guantanamo inmates to a vacant prison in northwest Illinois, is largely predicated on falsehoods, partisanship and fear. To listen to some of the most outspoken on the Right is to think that these detainees are superhuman, that they cannot be held safely and securely on American soil. That is a bogus, misinformed, idiotic premise.

After Attorney General Eric Holder announced the decision to try KSM, the self confessed architect of the terrorist attacks that struck the World Trade Center in New York City and the Pentagon in Washington, DC, many prominent Republican and conservative politicians, pundits and has-beens, leveled vicious attacks on everyone from Holder to the Department of Justice and the Obama White House. Much of the criticism was in response to the decision to try KSM and four others in Federal Court rather than in some military court or setting. These critics seem to have zero faith in our legal system. Their cries of doubt regarding the Federal Court and Federal Prosecutors ability to obtain convictions expose their belief that our legal process cannot overcome the challenges these trials will pose.

Given the unprecedented nature of these trials, it is doubtful the DOJ would proceed in Federal Court if they were not highly confident the trials will result in convictions. There are a number of approaches the Prosecution has available by which to try these men and other detainees. The Federal Courts allows the most legal latitude in that most of the “charges” leveled against the defendants are but variations of charges that are successfully argued in Federal Courts across the land on a daily basis. There is no need to “reinvent the wheel” in the effort to bring these murderous zealots to justice.

Certainly there are Federal Judges infinitely capable of managing their Court Room in an orderly, efficient, effective, professional manner. The critics concerns that the Court Room will be transformed into a circus implies their lack of confidence in the ability of those Justices sitting on the Bench in the Southern District of New York. Actually, that particular Office has successfully prosecuted more diverse if not disparate cases (including other terrorists) than any other in the country. This Court is uniquely capable and equipped to conduct these trials.

The fear-mongers on the Right fretting over “security” concerns are simply not familiar with the setting – New York City is blessed in that it is the home of the premiere law enforcement agency in the world – the New York Police Department (NYPD). New York City has historically been a most unique urban environment for a host of reasons and the NYPD has evolved into a highly sophisticated, innovative, efficient, Department staffed with the most well trained and experienced Officers in the world. Their capabilities are legendary; the array of Special Units and tactics permit them to handle any situation or scenario.

NYPD MORE THAN UP TO THE TASK 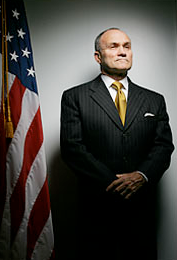 New York City is home to the United Nations, the Embassies and Consulates to the member nations, the Stock Exchange, banking and finance industries, communications and is an international city in every sense of the word. Because the nature and composition of NYC is so unique, the NYPD can claim a wealth of experience that no other Police Department in America and, arguably, the world can match or even come close to. That is a fact.

When the trials of the “detainees” begin, there should be no doubt whatsoever that the NYPD will provide sufficient security and safety. Of course, their ranks will be bolstered by members of the Federal Marshall's Service, the NYC Department of Corrections, NYC Sheriff's, the FBI and, perhaps, some military detail. While the precise nature of these trials may be more unusual than most, NYPD will not view it that way. “Sure, we are acutely aware of the challenges involved but we do not perceive them as unmanageable”, commented Captain Patrick McCann of the famed Emergency Services Unit (ESU).

According to a senior high ranking command officer assigned to the Manhattan Operations Unit, speaking anonymously, said, “ We will be ready when the day comes. We have seen a variety of situations that other police departments have never and will never see. We have several Special Units designed for this type of high profile event and the threats that will no doubt be generated by these trials. Since 9 11 we have formed our own Intelligence Unit as well as enhanced our Joint Terrorism Task Force presence. We strategize and plan for events such as this and we can assure the good people of New York City we will be rigorously diligent in providing security not just in the Foley Square area but across the City. We do this everyday.”

Retired NYPD Deputy Inspector Timothy Dowd said, “I think it is very appropriate that these vermin will face justice in a court of law in the City of New York. I want them here, I want them to be convicted here and to ultimately receive the death penalty here. If I had my way, their executions would be held in Yankee Stadium and you can bet the place would be packed. They thought they could hurt us, break us, somehow demoralize us. Man, were they ever wrong.”