KSM TO BE TRIED IN NYC

FINALLY JUSTICE WILL BE SERVED 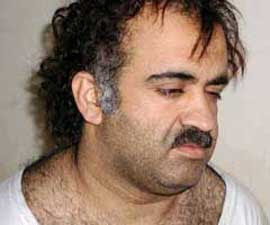 
(November 16, New York, New York) After being held prisoner by the United States for over six years, the self proclaimed “mastermind” of the terrorist attacks perpetrated on September 11, 2001, Khalid Shaikh Mohammed (KSM), is slated to stand trial in the Federal Court for the Southern District of New York. Since the Attorney General, Eric Holder, made this announcement there has been a great deal of vocal reaction both for and against this decision. The most hyperbolic of the reactions are emanating from the perpetually in motion mouths of Republicans and conservative opponents of President Obama.

The Mayor of New York City, Michael Bloomburg, has expressed his support for trying the Kuwait born terrorist just blocks from the site where the World Trade Center Towers once stood. Polling data indicates that the people of New York City are evenly split over the issue of having his trial, and that of four other Al Qaeda prisoners, in New York City. KSM is the uncle of convicted terrorist Ramzi Yousef, the man responsible for the first World Trade Center attack in February 1993. He was convicted in this very same Federal Courthouse in September 1996 and is serving a life sentence in solitary confinement.

At the heart of what is rapidly escalating into a controversy for the Obama Administration, is the core question of whether or not terrorists should be tried in Federal Court or in a military tribunal or other military court setting. Those opposed to the NYC trials claim that such a venue will be inadequate for such proceedings emphasizing that national security and intelligence gathering methods will be compromised. Additionally, those opposed predict that the Federal Court will provide Mr. Mohammed with a platform from which he will be afforded the opportunity to rant and rave about all manner of complaints from his alleged exposure to harsh interrogation techniques to his outrage over his perceived belief that the US is at war with Islam.

Other terrorists have been tried in Federal Courts and convictions were handed down. There is no reason to believe that the results will be any different in this case. Yes, there are concerns regarding having the trials held in New York City. Yes, there are legal matters that will need to be determined in the pre-trial phase. Certainly the defense will seek a change of venue. Despite some new and novel legal, logistic and security challenges, our legal system is more than capable of providing for justice for these defendants.

Many of the yammering critics opposed to the trials exclaim that these men are not defendants but rather “enemy combatants” or they employ some other ill defined term to describe their status. Whatever the case may be, they will be designated as defendants in order to be tried in accordance with applicable judicial procedures. Our Constitution is sufficiently robust to allow these men to be tried in a US Court of law with all the “rights” granted them under our laws. The critics harangue over this concept expressing outrage and dismay that we would grant them any “rights” whatsoever. The fact of the matter is they have been held by the US for years and they must be dealt with legally. Trying them in Federal Court is the most effective means to the ends of conviction and ultimately, execution. There is a wealth of substantive evidence that will assure KSM's conviction without ever having to mention information he may or may not have revealed while reportedly being “water-boarded” while in captivity. The asinine critics who fear what this cowardly thug might do or say in Court are essentially revealing their own cowardice and certainly there own doubts in our Constitutional system, the Federal Court and the cases assembled against these men.

What some of the most ignorant of the blithering critics fail to recognize is that the day the United States took custody of these men, they became our prisoners as well as our responsibility. How they are treated and adjudicated will be watched not only by the terrorists out there but by the entire world. Our reputation was scarred enough under the Cheney / Bush era and having these goons prosecuted in Federal Court, transparently and within the well demarcated borders of our legal structures will be noticed and noted. They were not captured on the “field of battle” and, therefore are not prisoners of war in the conventional sense. We have held them off shore in Guantanamo Naval Base at a prison designed specifically for such captives. Critics act as if the moment these murderous men step foot on US soil, we will all automatically be thrust into an age of jeopardy; that our very existence will be threatened. This is idiotic at best, base fear-mongering at worse.

No matter what these men have done or who they are they are men – not endowed with superhuman powers that will melt prison bars and crumble penitentiary walls. As for the terrorists around the world and possibly here at home who continue in the pursuit to perpetrate mass murder on our soil, yes, they will no doubt issue fatwas and war cries condemning our legal process and the validity of the Court. So be it. We have been under threat since long before 9 11 01 and, since that dreadful day, we have significantly improved our security particularly in New York City.

It is just and fitting that KSM and his co-conspirators stand for the horrific crimes of which they are accused and no doubt guilty in New York City. Having them return to the scene of the crime and appear in Federal Court will diminish them; they are not martyrs. As long as they were held under the auspices of the US military, they could claim they were political prisoners and, if executed by the military, say their lives were sacrificed for their delusional “cause”. We need not make these men martyrs, that would satisfy them and their cohorts worldwide.


Copyright TBC 2009 © All Rights Reserved
Posted by Brooding Cynyc at 5:45 AM