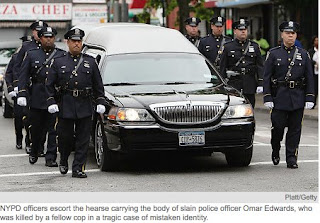 (June 4, Brooklyn, NY) Every funeral service for a fallen member of the New York City Police Department is an extremely profound and solemn event. Some are moved by the haunting tones of the bagpipes playing ‘Amazing Grace’. Others tear up when the lone bugler fills the air with the sacred sounds of ‘Taps’.


Thousands of white gloved officers lined the streets of Brooklyn today as Officer Omar Edwards was honored and transported to his final resting place. During this time every Member of Service that stood at attention as the hearse crawled by did not think of themselves as white cops, black, brown, Chinese, Jewish, italian or Irish cops. They thought of themselves as brothers.

Every cop that goes to work, kisses his wife, husband, children or other on the cheek is fully aware that he or she may not return home after their tour. One’s own mortality is a constant companion; not necessarily always in the forefront but, certainly registered on some level. Cops deal with violence and death; cops understand the proximity in which they cohabit space with death.

Officer Omar Edwards did not make it home to his wife and two young children last week. He knew the risks and the complication of the tragic circumstances of his death make the entire saga that much more raw and painful.

The details of those seconds, of those nanoseconds will be recreated by NYPD units who investigate such happenings. their results may not be made public for weeks or months.

The overcast skies were intermittently pierced by bright sunlight. Some would interpret these atmospheric variations as a sign that the Good Lord was awaiting Omar’s arrival. He had probably arrived there last week, shortly after the doctors at Harlem Medical Center pronounced him dead.

We pray for our fallen brother, for a young man who gave his all for his job and for those heavily laden souls who survive him.