FROM THE BRONX TO THE BENCH:

SOTOMAYOR SHOULD BE CONFIRMED
WITHOUT GOP PROCEDURAL ANTICS 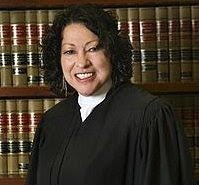 
( June 1, The Bronx, NYC) Growing up in the multiethnic neighborhoods that define The Bronx, there are many lessons to be learned. Those who have come of age on these streets acquire ‘street smarts’ that transcend anything that could be taught in a classroom. Aside from the perspective and perceptions gained by growing up and living into adulthood here in these crowded neighborhoods, not many elementary and high school students envision a way out or up from the hard scrabble living their parents, often working two and three jobs, do their best to provide.

It is easy and convenient for outsiders to stereotype a place and its people: certainly The Bronx and particularly, The South Bronx, have been easy prey for critics and biased, narrow minded know nothings for decades. Most outsiders experiences in the Bronx consist of quick subway rides in from the suburbs to watch a Yankee game. They’d dare not venture beyond the 161st Street Subway Station and, once back on street level virtually to the “safe haven” of the Stadium. An unusually heavy uniformed police presence assures the baseball fans; provides them a sense of safety and security that they feel is required for them to be in The Bronx.

The roster of people from The Bronx that have gained fame and / or fortune; notoriety of some sort is long and diverse. From the brilliant eradicator of the blight of polio, Dr. Jonas Salk through the former Secretary of State Colin Powell, The Bronx has produced an impressive list of common people, of meager means, who have made contributions to our country and society that very few other communities can boast.

The most recent is, of course, the young Puerto Rican - American , Sonia Sotomayor who has just been nominated by President Obama for a seat on the highest court of the land - The Supreme Court. Judge Sotomayor should be Supreme Court Justice very soon for a host of reasons.

For the moment, disregard the facts of her early years; forget she was raised by a single mother who spoke little English in some of the toughest neighborhoods and housing projects in New York City, if not the country. Begin examining her life from her freshman year at Princeton University. After a remarkable High School experience at the famous Cardinal Spellman High School, she was excepted at one of the most elite universities in the country and graduated number one in her class. That fact alone is evidence of a stellar intellect. From there, on to Yale Law School on an academic scholarship, not to fulfill some racial, ethnic or gender quota, but because she had earned her place based on her ambition and superior intellectual gifts. She, like Barak Obama during his years at Yale Law, was chosen to edit the prestigious Yale Law Review, an accomplishment that very few can claim.

After Yale her career progressed not because, as some would maliciously suggest, based upon affirmative action initiatives, but rather based solely on her mind, talent, determination and abilities. Her ascent in the legal community was not “meteoric”; not at all. It was the product of her record first as an Assistant District Attorney in NYC, then as a Federal Judge for the Southern District of New York. She has punched more tickets of accomplishment along the way than most of the sitting Supreme Court Justices. Federal District Judge, Federal Circuit Judge, and Federal Appellate Judge; none of which are small or irrelevant positions nor earned lightly. President George H. W. Bush appointed her to the Federal bench and then President Bill Clinton named her to the Federal Circuit Court.

Meanwhile, back in The Bronx, Sotomayor’s blue collar, hard working, mother, who never remarried after the death of her husband when Sonia was just 9 years old, raised her son who went on to become a highly respected physician. Clearly, this was a family that valued education saw it as a way to be propelled from the mean streets of The Bronx.

The hearings to confirm a Supreme Court Justice are always hard fought, mostly political battles; adversarial, rancorous, partisan and just plain nasty. Sotomayor will certainly have to survive the Senate Judiciary Committee gauntlet comprised of politicians who are of dramatically inferior intellect and character. Sadly, this is the way it works. Corrupt, moronic, self-serving politicians will be allowed their moments on their Committee soapbox to attack Sotomayor, to toss out incendiary questions and challenge her “Judicial Approach”. The entire process is, in essence, a charade of fools; career politicos who could never match her legal experience or intelligence will have their moments in the sun on C-SPAN playing their own arrogant game of “gotcha politics”.

The rabid partisan criticism is already in full swing. Republicans, who are about as relevant as the DVD player, are posturing, sniping and spewing their normal brand of deceitful filth and bile. Determined as ever since they have been in exile to oppose anything worthwhile, they glom for the omnipresent TV cameras and threaten filibusters, rigorous reviews of all her previous rulings and “to not rubber stamp” our President’s choice. Shame on them but, they seem immune to any form or measure of shame; they are political hacks, angry, bitter and petulant.

Any Jurist who has spend appreciable time on the bench has a long “paper trial.” Every ruling and opinion, being consent of dissent from the majority opinion, does, in a way, paint a picture of one’s “judicial temperament.” rest assured, currently, an untold number of Senatorial and Congressional flunkies are scouring each and every word ever written or uttered by Judge Sotomayor. They hope to find the fodder for the ultimate “gotcha” question or a ruling that does not comport with their white southern male sensibilities. No doubt the GOP will “play to the base” and do their best to somehow tarnish the reputation of a Supreme Court nominee who, by the vast majority of opinions of those most familiar with her Judicial history, is beyond partisan reproach.

The primary issue every time their is a Supreme Court nominee is; are they a “strict constitutionalist” or “an activist judge who legislates from the bench.” Fair questions if not asked within the narrow confines of partisan rabble-rousers. Our greatest document, The Constitution, not ratified until several years after our Declaration of Independence, hs stood the test of time. Many rulings that have proven to be egregiously wrong, have had there basis validated from the Constitution.

Our Constitution found justification for slavery, for the women's denial of the vote, for the “separate but equal”, education's between Blacks and Whites, for Blacks excluded from voting as well as, for the extreme right, no legal footing to legalize abortion. Our Constitution has served us well for over 226 years. Our Supreme Court has made their share of horrid interpretations of that document yet, as a people and society, it has stood the tests of time. It may be a bit torn and tattered, its edges a little wrinkled, but, it defines who we are and who we have been. Born from the centuries old British document, The Magna Carta, our Constitution must remain a “living” document. Granted, there are a limited number of modern day issues that our Constitution speaks to. However, the basic rights of due process, equal rights, Habeus corpus, fair but equal and the other essentials from our Bill of Rights through every Amendment to that noble, inspired document, remains as it was written. It survived our Civil War and has a number of landmark rulings that have blossomed from its simple yet so profound language.

Our Supreme Court should be as representative of the composition of our society as should be our Legislative branch. The cases that the Court hears now days are more complex and often require more subtlety during contemplation, than anything our brilliant, inspired fore fathers could have imagined.

The Bronx is a sprawling, densely populated Borough, one of five that comprise The City of New York. It is the largest Borough; the only one of the five to be on the actual continental United States. The other four are islands or, like Brooklyn and Queens, located on an island. Arguably The Bronx is the most diverse, the most disparate and defined , in some ways, by its disparity. Sonia Sotomayor's earliest journeys took her from Soundview to Co-Op City, from one poor neighborhood to the next. her inherent abilities and courage showed her the path out as much as did the encouragement of her immigrant mother. It has been a long road. Not many form the Bronx ever get to venture down the Cross Bronx Expressway to the George washington Bridge and into the alien landscape of New Jersey. Most never get out across the Triborough Bridge or the magnificent Throgs Neck Bridge to dip their toes in the Atlantic Ocean from Rockaway beach.

Judge Sotomayor has navigated valiantly a journey so impressive, so filled with accomplishment that, to deny the American people a mind and perspective such as hers would be a travesty, a tragedy in many ways, and indicative of the fact that we, as a people, have not moved beyond all the barriers that Barak Obama’s election indicated.

From The Bronx and every other inner city and rough rural community we await the day that the little Puerto Rican girl from The Bronx sits on The Highest Court in Our Land. It is an “American dream” story writ large; to deny her appointment would be a pox on all the houses of those in the position to make it happen.


Copyright TBC 2009 © All Rights Reserved
Posted by Brooding Cynyc at 7:15 AM