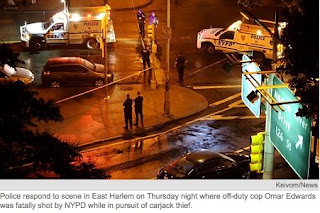 (May 29, Harlem, NYC) 125th Street was slick from a steady drizzle. The sodium arc lights, sparsely placed, did nothing to clarify the mist. Three cops from the 25th Precinct Anti Crime Unit were on a mission; the description of the perp was as vague as usual - black male, between 22 and 32 years old, medium height, medium build, medium complexion, closely cropped hair wearing jeans and a shirt. Last seen running east on 125th. The radio traffic in the unmarked anti crime squad car spewed out statical, staccato updates along with the overflow of the usual garbled radio commotion.

A black man, just getting off work approached his car only to find another black man in the process of ransacking it; maybe he was going to steal it. The fact that the black man’s car that was being burglarized was an NYPD cop was known to no one other than himself. His anger and frustration flared after a night working the housing patrol unit. He gave chase to the would-be car thief and ran as hard and fast as he could, service weapon in hand.

The anti crime boys were on this immediately; this was one of the reasons they existed - to interrupt street crime as it was occurring, to intercept and apprehend, in the act, the mopes that committed the bulk of the street crime in the rougher neighborhoods of NYC.

Decisions are made in a fraction of a fraction of a second; a nanosecond. Adrenaline, excitement, the sense of duty, danger and one’s own morality collide and repel against each other within the minute confines of a synapse. Training, experience and reflex interact on a sub or even uncontious level and it is there that choices are determined. The pursuit becomes all consuming; the desire to “do the right thing” somehow remains tantamount amid the confusion of the chase.

Armed or unarmed, who is it that I chase? What danger does he pose to the innocent bystander, my partners and myself? The heartbeat escalates more than the physical exertion warrants. Everything appears in the crystal clarity of slow motion yet the reality of the moment allows for no “replay.” This is it. I will see my wife and boys again, I will do the best I can but; why won’t he stop? The throat burns from the rapid breath and screaming yet, the perp keeps running at a pace that appears otherworldly; how can a man run so fast without braking stride? Across the street, between the parked cars, approaching the enhanced lighting of Second Avenue. He has a gun; there is no doubt about it. It is in his right hand and it looks larger than it really is. All he has to do is stop and suddenly fire...than what?

The anti crime squad car, in all its unremarkable drabness follows the pursuit trying to cut off, anticipate the route of the foot pursuit. They see the described perp, is still running, has not obeyed the shouted commands from the winded cop.

No one except those present at the critical moments will ever know what transpired. The NYPD Patrol Manuel very clearly addresses such incidents. The “challenging officer” assumes control and command over the officer being challenged be they in plain cloths, undercover or in uniform. Why Office Edwards did or did not respond in a manner that would have saved his life is yet to be determined.

If a computer could be constructed to exactly emulate, duplicate, the workings of the human brain, it would cover the face of the earth. This analogy comes from neuroscientists and other specialists devoted to brain studies.

The number of connections in the human brain, those places where axon meets dendrite via an electrochemical burst, are almost infinite, certainly a number not calculable. Brain functions are among the most complex, intricate and mysterious of all human biologic phenomenon. WE function on a three level neural plane with only one, our conscious minds accessible to us. the un and sub conscitious is where he action is. Training, repetitive drilling, and other forms of mind-body conditioning as well as reflexes, dictate our actions, often before they register consciously.

Officer Omar Edwards life was determined in a synaptic blast, a combination of so many biological , physical, chemical and neurological variables that no cohesive explanation is yet available to medical science. That synaptic activity resulted in the shooting on Officer Edwards and, what transpires from this point is unknowable.

In the military such incidents are classified “friendly fire”, a rather dubious distinction , heavy with ambiguity. The “Fog of War” is often cited as the cause. What happened here on this street last night was, in the military sense, “friendly fire” and, while there is not a raging war rocking this city, there are some tendrils of that fog that envelop Officers who patrol and roam the concrete canyons, the back alleys, the broad avenues and underground labyrinth of the dark and vast subway network. Decisions, often life and death decisions, are made under extraordinary circumstances where men and women of the NYPD find themselves.

What crosses a mind under such pressure, faced with uncertainty and danger? For all the calls NYPD responds to in this sprawling yet claustrophobic city of 8 million, 99.999% of them are handled professionally, defused without incident and resolved as justly as possible. Unfortunately, Officer Edwards found himself caught up in that rare 0.001% where reality is occluded, reflex kicks in and mistakes more apt to occur.

May God have Mercy on His Soul

On behalf of all of us at The Brooding Cynyx and our strategic partners at BronxWest Consulting and Palermo Associates LLC, our thoughts and prayers are with Officer Edwards’ family and all the MOS of NYPD.

Copyright TBC 2009 © All Rights Reserved
Posted by Brooding Cynyc at 5:30 AM