AMERICA OBSERVES MEMORIAL DAY - OR DO WE? 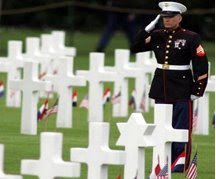 
(May 25, Arlington , VA) In a sense every man or woman who ever donned a uniform of a branch of the United States military is a unknown soldier. Here there is a special tomb containing the remains of unknown soldiers from almost every war this country has ever fought. Not far from that stolid marble structure, seemingly endless rows of white markers define the grave of a fallen soldier. The names of those buried beneath these simple white crosses and Stars of David, are catalogued; the identity of the occupant of each plot is known.

Unless you have been in the military or are a relative, family or friend of a fallen soldier, everyone who has ever served and is serving now, is an unknown. We see on the TV news and read in the papers about battles being waged in far off lands. The “military”, as mentioned in the media, is a collectively anonymous bloc, a force of young men and women who are tasked with defending our nation; they are the latest members of a long line of patriots stretching back to our Revolutionary War.

Our history as a Nation is punctuated by wars. Our country was born out of a war and with disturbing regularity, we have found ourselves involved in conflict, conflicts were we have sent our men and women to places to endure incredible hardships, to sacrifice all and to constantly exist in an environment in which their own mortality is not an abstraction but a very real and present possibility.

Those among us who have not been initiated on the field of combat can call on any sufficient measure of imagination to describe or understand what war, combat, is all about; the way it feels and smells, what is sounds like and how the echoes of the skirmish resound forever. Battle is harsh and it is hell. It is death, destruction and darkness that tests the very soul of those involved. It is not orchestrated or precise, not organized or choreographed despite the most elaborate plans crafted by he brass. It is confusion and fear interspersed with anger, rage and determination. It is messy, sloppy and the actuality of the most primitive of instincts being called upon. After all, it is, at its core , all about making death.

We have troops here and there doing this and that while we sit comfortably on the couch and change the channel when the story becomes boring. Unless you have blood on the field it is not truly yours to embrace yet, what transpires in these far flung locations, is all about us; our nation’s safety and security is on the shoulders of those anonymous soldiers, marines, sailors and aviators; support troops of every stripe toiling for a cause greater than themselves and often not even understood.

When the draft was suspended and ultimately eliminated by 1973, we lost the sense of a shared experience, of a commonality among us that transcended everything else; religion, race, region and beliefs were supplanted by camaraderie, cohesiveness and training. It was a different country when virtually all our elected officials had been in “the service.” The sacrifices were shared, born by every family in every city, town, hamlet and village.

Now our wars are designed and conducted by men and women who have absolutely no clue of the brutality of the situations they seem to readily commit our Nation’s lives to. Wars have become political footballs tossed cavalierly from one side of the political aisle to the other, dissected from afar by experts and pundits who wouldn’t last 30 minutes under fire. It is easy to proclaim your patriotism loudly while you sit in the Senate or House chambers or behind the desk of a cable TV news program. Passion is easy to exclaim from a distance.

We collectively thump our chests, apply patiotic bumper stickers to our cars and talk about “kicking ass”. The disconnect is startling. We are a Nation currently fighting two separate wars being waged by a small segment of our population. Daily we should each have a least a brief moment to consider those who do in fact fight for and defend our freedoms.

We like to say that “Freedom isn’t Free” but only those who have ever slogged through the mire, choked on the dust or trekked through a distant jungle know just how much we pay, they pay, for that freedom.

We are an imperfect nation of imperfect people governed by seriously flawed, selfish, often corrupt and evil people. We make mistakes and will continue to do so but, for any of us to think our military is not trying their hardest and forever struggling towards reasonable, practical, perfection, we should remember who it is that are on the killing fields, and all those wearing proudly their country’s uniforms.

For all who have sacrificed and all those who sacrifice today, we salute you.

Thank you for your service.