NYPD ONCE AGAIN PROVES WHY THEY ARE THE BEST 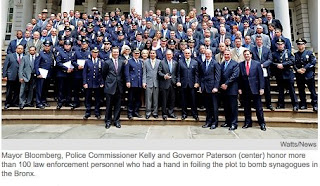 WHAT WASHINGTON CAN LEARN FROM NEW YORK CITY


(May 22, The Bronx, NYC) It is one of the oldest detective techniques and often, one of the most fruitful. An arrest is made, the suspect facing serious charges. During interrogations he alludes to information about people, places and past events he claims to have direct knowledge of. Once his assertions are confirmed as accurate, the detectives offer a deal; either cooperate with us or face the full weight and force of criminal prosecution for your crimes. The suspect, once “flipped” becomes a source of valuable information often leading to other arrests, apprehensions of ‘higher-ups’ in a criminal enterprise, or, actionable intelligence.

That is precisely what allowed NYPD and, with later involvement, the FBI, to thwart a plot to bomb synagogues and Jewish community centers in New York City. The alleged terrorists also wanted to shoot a military aircraft from the Newburgh Air National Guard Base. Had they managed to have been successful, they would have perpetrated terrorist acts here that would have had far reaching repercussions beyond the immediate death toll and damages. The NYPD credits the informant with providing the “inside” information needed to arrange sophisticated surveillance, gather the information for the prosecution, and, ultimately arrest the four would-be terrorists.

Already the would-be terrorists are being defended by their families and talk of “entrapment” is already swirling about. The entrapment matter will be decided in the courtroom; the personal character of each of the four suspects will emerge in that forum as well. Even if these men were dimwitted, drug addicted and other wise small time losers, they did in fact hatch a plan, clearly expressed their desire to inflict harm and spent the time and resources necessary to do so. The tried and true methods of policing - investigation, surveillance, infiltration and subsequent arrests - worked flawlessly. This case may someday stand as a model for how domestic terrorism cases are made and prosecuted.

These men will be tried in a court of law, entitled to all the rights and provisions of criminal law afforded them in our Constitution and legal precedent. They are not being held in a “gray area”, they are not “enemy combatants”, “prisoners of war” or “detainees”. They are criminals accused of some of the most serious felony charges under the Patriot Act and the body of law addressing domestic terrorism. They will have their day in court; no water boarding or other “enhanced interrogation techniques” will be employed. Any seasoned NYPD Detective or FBI Agent will tell you unequivocally that such methods simply do not work, they often backfire and produce garbage information from the prisoner that wastes law enforcement time and resources.

From this vantage point, just two days hence from the interruption of their plot, it appears all involved acted accordingly, legally and with the supreme professionalism, diligence and commitment that defines all of the men and women of NYPD. Once called in to assist, the FBI performed just as well. We should be grateful to all and appreciate the efforts of such men and women that keep us safe. They work in anonymity, sometimes in the darkest of shadows, but they do their duty and do it exceptionally well.

Gina Provanzonno, ESQ. of the BronxWest Consulting Office of Legal Affairs contributed to this post. TBC express our gratitude.