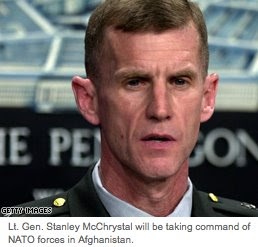 New leadership does not change
“ownership” of Afghan fiasco.


(May 11, Washington, DC) Only in Washington; only inside the Beltway can such ignorant proclamations appear valid. The inhabitants of the cloistered environs of the “Beltway Bubble” all suffer from a virulent strain of Attention Deficit Disorder as well as several other pathologies manifest as cognizant dissonance, idiocy, rushes to judgment, short term memory disorder and self aggrandizement syndromes where in they are all rendered incapable of realizing reality and too eager to believe their own hyperbole. No wonder the American “News and Journalism” are in such dire straits. Their profound isolation from the real world are pushed their whole charade towards irrelevance as far as journalistic or any other brand of credibility is concerned. Their latest boondoggle is a beaute.

Within 24 hours of Commander-In-Cheif Obama replaced a Bush Era holdover to lead the NATO efforts to combat the deteriorating situation in Afghanistan, several “mainstream media” outlet have already given undue significance to the personnel decision. Some have gone so far to indicate that this single personnel change now gives President Obama “ownership” of an almost 8 year struggle, a struggle so grossly mismanaged by the Bush Administration and his deluded civilian and military architects, that their abysmal collective failures in strategy, tactics and, mostly robust military combat commitment, have created the conditions that have allowed the fighting to continue unabated since October 2001.

Condi Rice, Dick, George W and Rummie -
THE TRUE OWNERS OF THE WARS

Current Commander of combat forces in Afghanistan, Gen. David McKiernan, was appointed to that position by the Bush Administration Secretary of Defense, Robert Gates, in July 2008. Gates still remains as Secretary of Defense after Obama decided to keep the Bush Era holdover for “continuity”, insisted that removing McKiernan was in no way an indication that “things have gone wrong”, bu attributed the switch to McChrystal as a decision arrived at after close consultation with the Joint Chiefs of Staff and General David Petraeus.

Last week president Obama outlined his new “seven year strategy” for Afghanistan yet this cannot be a reason to suddenly dub that conflict as being “Obama’s War.” The hapless, tone deaf, arrogant Bush Administration quickly shifted all their resources to Iraq quickly after US forces “defeated” the Taliban and had “Al Queda on the run.” The harsh facts on the ground today that both the Taliban and Al Queda have resurged to strength and efficiency levels not seen since 2001. Today both entities threaten the stability of weak governments both in Afghanistan and neighboring Pakistan. Recent statements by the President of Pakistan are “encouraging” to the pentagon and may represent a profound reassessment in the Pakistani government regarding the true nature of the threat they represent to Pakistan’s national security.

Only within the free for all of the 24 hour newsertainment cycle could anyone even attempt to assign “ownership” of Afghanistan to President Obama who is a scant 113 days from his inauguration. Such a charge is so outrageously erroneous it says more about the poor quality of those who “report” from within the Beltway as it does about most American’s ability or desire to see beyond the bogus headlines.

This is George W. Bush and his boss, Dick Cheney’s war; always has been, always will be. Old Dick is on cable newsertainment programs virtually daily defending his criminal, failed, illegal and unproductive tactics regarding torture touting the fact that he and Georgie, and their “enhanced interrogation tactics” protected the United States from additional terrorist attacks after 9 11 01. Perhaps if this was true, he would not sound so miserably pathetic but no less insane and evil than he did for the 8 years he ran the country and wrongly prosecuted two wars of his own design.

If water boarding and all the other “unconventional” interrogation techniques were so effective Dick, than why the hell is Osama Bin Laden still at large for the last 7 plus years? Georgie vowed to “kill or capture Bin Laden” citing the Texas philosophy of rounding him up “dead or alive.”

We have all seen how that has worked out. All of this geopolitical strife has been left on the overcrowded desk of President Obama while crooked mouthed Prick Cheney blathers on continuing to spew out his lies, tripe and deceits. Weapons of mass destruction - remember them Dick?

Outside the cocoon of the Beltway the facts are much more apparent and impossible to conceal, deny or pretend they never happened. Obama’s war, Dick? Not a chance.