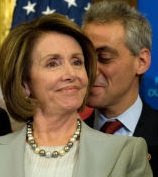 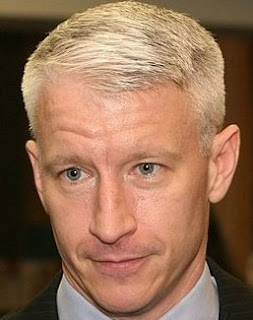 
(May 14, Oakton, VA) This posh suburb south of Washington, DC , where houses can cost well over $1 million dollars, is home to White House Chief of Staff Rahm Emmanuel. This is the place he spent the most time with his long time lover, Anderson Cooper of CNN. Neighbors often saw the outwardly appearing couple strolling hand in hand. Their love affair has been one of the best kept secret in the fish bowl that is Washington although, by many accounts it as known but kept quiet . The press, for some odd reason, gave the two gay men a pass; they did not report on their affair.

All that has suddenly changed. Since Emmanuel began what insiders describe as a “torrid” love affair, the story is now making headlines as well as making waves. Emmanuel and Cooper are both powerful in different ways with each in a position to do damage to the other. One Washington insider who is familiar with both men said, “Before this runs its course it has the potential for being very, very nasty and public. Anderson is devastated since Rahm dumped him for a woman. He may never get over it. He allegedly through most of Rahm's clothes out the window of the house they shared and set them on fire. He is really struggling.”

What many find most shocking is the fact that Emmanuel is involved with a woman; not just any woman but the Speaker of the House, 69 year old Nancy Pelosi. Ken Philner a life long friend of Em,manuel since kindergarten commented, “I am absolutely blown away that Rahm has taken up with a woman. I suppose he has transformed from homosexual to bisexual somewhere in the last few months. It is heartbreaking to see him leave Anderson who has been so loyal. Anderson loves Rahm, it is that simple.”

Sources in the Speaker’s office commented not for attribution told TBC that “Nancy really found Rahm attractive. She did everything she could to seduce him and it worked. They have been very discrete but, at times, they have been careless.” Doris Leah Flambue, a former aide to Pelosi revealed that “One day when I thought the Speaker had left the office I walked in and found her and Rahm having sex on her desk. It was disgusting. They were going at it like high school kids. They both saw me and just kept on boinking and laughing. I resigned from my job the next day.”

Allegedly Cooper and Emmanuel began their affair after first meeting each other last October while then Senator Obama was involved in his campaign for President. Within days they were living together. Cooper flew up to New York City every afternoon to host his show and flew back immediately afterwards. He became a familiar face to the flight crews on the late night shuttle from New York to Washington. Gary Limpdong, a stewardess on the American Airlines late night shuttle commented, “It was apparent to me that Anderson was seeing someone in DC. He often had flowers and chocolates with him on the flight. We had had a very brief sexual encounter, I thought he was cute. After a few times together I broke it off because he liked rough sex. I’m not into that . I don’t want to be whipped, spanked and choked during sex. I like it tender. Anderson was just too brutal for me. Now, I hate him. I hope he looses his job. He’s such an arrogant queen, a real diva, I can’t believe CNN puts up with him.”

When questioned about the affair, White House Press Secretary Robert Gibbs was reluctant to comment. He would only say that, “Rahm is a well known queer in certain circles here and in Chicago. I say to each his own. I am just surprised he would leave Anderson for Nancy Pelosi. She is a real bitch and, up close, hideously ugly. I don’t know what Rahm sees in her but I wish them both well. Their affair might help President Obama advance his agenda. I just hope they stay together long enough to pass health care reform.”

Some Congressmen such as openly, flamingly gay Representative Barney Frank express great concern over the relationship between the White House Chief of Staff and the House Speaker. Frank said, “I think this is a crass, trashy maneuver by Nancy Pelosi. Not only could this cause discord among Democrats, I am angry that she has turned one of the most gifted homosexual lovers. I will never forgive her.”