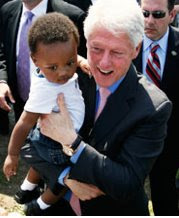 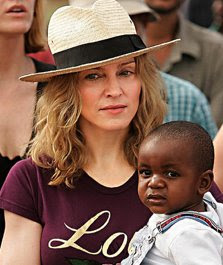 Bill Clinton with his adopted African son;
Madonna with one of hers.

According to sources close to the former President, Bill Clinton is feeling somewhat “neglected.” Although his charitable foundation is doing outstanding work on world poverty and AIDS, spending millions in the most impoverished countries, the millions he is making from speaking engagements does not seem to satisfy him. One of his oldest advisers commented, “Bill feels a little out of sorts. While his wife travels the globe screwing up foreign policy, he has come to think that the Democratic Party has turned a cold shoulder to him. Frankly, they have.”

In an effort to recapture media attention, the former President has decided to adopt an African baby. Mr. Clinton recently traveled to Malawi, Africa and snatched a young African boy and has initiated adoption proceedings. James Carville, the serpent headed, long time friend of Mr. Clinton said, “I believe President Clinton is sincere and his adoption of a little Black boy says a lot about his character, his heart and his loneliness.”

The plight of starving orphans has been championed in recent years, most notably by the world famous entertainer, Madonna. Madonna has adopted several needy children from third world countries often over the objections of their birth parents. Such objections have not usually interfered with her efforts to gain custody of the children and bring them back to America where they can grow up obese, illiterate and otherwise lazy.

Malawian authorities report that President Clinton arrived in their country Monday with an entourage that included his soon to be married daughter, Chelsea, and such luminaries as Al Sharpton, George Clooney, Kid Rock, PeeWee Herman, Joan Rivers, Dr. Phil and Art Garfunkle. Upon his arrival he was transported by helicopter, jeep and camel to a sprawling refugee camp. Apparently one of the thousands of orphans made his way to the former President, jumped in his arms, stuck his tongue in his ear, and captured Clinton’s heart. “This young fella is coming back with me to the United States. He deserves a better life and I deserve a boat load more publicity. I’m tired of seeing Hillary’s saggy ass on TV. I’ll raise this child just like I did my own; scared, abandoned and unreliably but, with a lot of love. I just can’t wait to hire a nanny for him. Since I can’t hire interns anymore, I have been waiting to hire up a good looking, Hispanic nanny.”

Secretary Hillary Clinton reached on a high level diplomatic visit to Sri Lanka commented, “I know Bill has been lonely, feeling left out. He sure knows a thing or two about Black babies and I am glad he has decided to adopt. I wish him well.”