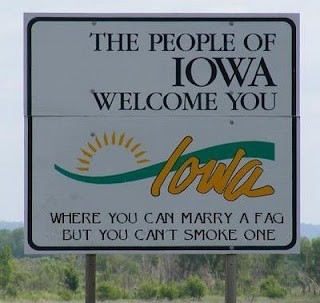 
(May 13, Twisted Gullet, IA) Just weeks after a three court panel of Iowa Supreme Court justices allowed same sex marriage as legal in this state of hogs, cows and corn, there has been a noticeable surge in people coming here to get married. The economy is getting a much need boost from these homosexual visitors. Merlin Knebel who owns several Holiday Inn’s around the Des Moines area said, “ We have been fully booked for nearly two weeks with reservations being called in from all over the country. My hotels haven’t been this filled up since the Pork Expo in 2002.”

According to the Iowa State Board of Tourism, legalizing homosexual marriage has brought millions of dollars to this state. The homosexuals seem to spend lavishly while here with some of the couples spending thousands of dollars for receptions, parties and other celebration functions. Gillian Krumpf of the Governor’s Commission For Homosexuals commented, “These people know they are welcome here, not only to get legally married but to just fool around if they want to. We welcome their tourism money for our hotels, motels, restaurants, gay book stores, tuxedo rental establishments and bridle and tack shops. If you are gay and live in the midwest and want to get hitched, well, you bet this is the place to come.”

Not all Iowans are as comfortable with same sex marriage but, for the most part, them appear to be tolerating it well. Manure farmer Landel Schwartzendruber said, “I could care less what you do in your private times. Hell, my cousin Floyd had a thing going with a goat for many years. I figure to each his own but, well, all these queers and dykes coming here just don’t seem right.”

What seems to trouble Iowans most is that the decision to allow same sex marriage was made by three judges. Most Iowans wish they had the opportunity to vote on the issue since it is somewhat controversial in certain segments of the state. Already several special interest groups have been organized protesting the same sex bill and plan to oppose it fiercely if they manage to get it on the state wide ballot in 2010. Burl McHusk, founder of Iowans Against Non Same Sex Marriage commented, “We’ll fight this tooth and nail. We don’t need these people coming here corrupting the minds of our children, steers and swine. Enough is enough, by golly.”

Conversely, there are a number of pro same sex marriage groups aggressively organizing ad campaigns promoting it as just another well deserved civil right. Lance Phluffer of the Iowa Gay, Lesbian and Transgender Education Movement sees the often subtle, just under the surface prejudice against gays in Iowa as potentially dangerous. Phluffer said, “While most Iowans will tell you to your face they support you, some would shoot you in the back if given the chance. Civil rights include rights for all citizens no matter whom they choose to sleep with, have bawdy, illicit sex with or marry. We will get our message out and we thank the Iowa Supreme Court for being so progressive.”

This post is the latest installment in our “Unsalted Earth” series.


Copyright TBC 2009 © All Rights Reserved
Posted by Brooding Cynyc at 7:30 AM