THE SWORD THAT CUTS BOTH WAYS 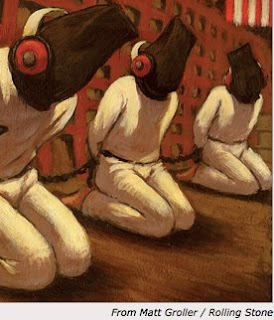 Does what applies to “US”
apply to “THEM”?

(April 29, New York, NY) Daily the debate regarding whether or not the Bush Administration employed torture techniques while interrogating "enemy combatants” captured after the terrorist attacks of September 11, 2001 becomes more of a knotted mass of conflicting opinions. Threats and recriminations abound as more and more previously classified documents from the Bush Administration’s Office of Legal Counsel (OLC)are made public. The debate landscape is overpopulated by loudmouthed, ill-informed blowhards on both sides of the issue whose narrow minded partisanship has allowed a much needed examination of the facts to become a pundit punted political football.

We have seen in the past other extremely serious issues of national security, policy and civil rights become secondary to the crass political interests of those on either side of the divide. It appears our federal government is incapable of dealing objectively, rationally and reasonably with any issue at all no matter its significance and importance.

Generally speaking, Republicans remain steadfast in their defense of the Bush Administration and all measures they took in the aftermath of 9 11 01 under the auspices of “The War on Terror.” Likewise, Democrats are determined to exploit the issue while exposing every questionable decision and arguable rationale presented by the Bush team. Somewhere between these entrenched positions exists the truth, truth will only be ascertained as more and more information is declassified and studied.

There are some that argue that the entire matter is now a moot point. President Obama has signed Executive Orders calling for the ban of all "enhanced interrogation" techniques, he has begun the process to close the military prison at Guantanamo Bay (GITMO) Cuba where up to as many as 500 “enemy combatants” and “detainees” have been physically incarcerated and held in a virtual legal limbo. The detention system at GITMO was specifically chosen to keep the prisoners off United States soil and thereby deprive them of all the rights associated with our criminal justice system. Several Superior and Supreme Court rulings have deemed this practice “inappropriate and illegal” under our laws.

Such rulings bring the debate back full circle to the origin as to what we can and cannot do with “enemy combatants"; persons captured on the battlefield, un-allied with any nation state. Terrorists, by definition, are in a legal category of their own but are the terms and specifics of their incarceration and treatment governed by the Geneva Conventions and the United Nations Conventions Against Torture and Other Cruel, Inhuman or Degrading Treatment or Punishment? These conventions have been ratified by almost every country on the planet and have largely been respected.

The Geneva Conventions are composed of four individual treaties which define the standards for international law and humanitarian concerns with specific, well defined articles addressing treatment of the wounded, civilians, shipwrecked and prisoners of war. Important revisions were adopted in 1949 in the wake of the atrocities committed by the Axis during World War II.

A key component that appears to be absent from the current debate in Washington is that these conventions and treaties apply not only to the United States but to all countries that are signatories to them. This supposedly assures that American POW’s will be treated accordingly. This fact alone stands as a strong argument against the use of enhanced interrogation and torture tactics by the United States government no matter what the justification. If the United States remains in the eyes of the world on shaky, hypocritical, moral ground, any future American POW’s may find themselves treated without the protections of the relevant conventions and treaties.

Besides the well established and thoroughly documented fact that torture simply does not work; it does not result in obtaining actionable, accurate intelligence - stands a host of hypothetical questions that opponents and proponents alike employ in lame attempts to support their arguments.

Some of the most brain dead of the cable network blabbermouths pose the hypothetical that “if an attack were imminent and a terrorist was in custody, would it be justifiable to use torture to help prevent the attack?” This is so far fetched a scenario that even as a rhetorical, hypothetical inquiry it is useless. However, if we are to remain true to our laws, ethics and customs as well as the international conventions and treaties we have ratified, the answer can be nothing other than a simple “No.” The United States of America does not torture under any conditions, period.

What makes this hypothetical scenario remotely intriguing is the one in a billion possibility that such a circumstance could arise. The odds that our current or a future President would ever be in such a situation are astronomical but they do raise an almost visceral reaction from everyone no matter which side of the debate they represent. Anyone who was in New York City on 9 11 01 or witnessed the events on TV recalls the horror and outrage those circumstances and images engendered. A reasonable person could ask that if indeed we held in custody a terrorist suspected of possessing vital information regarding an impending attack, why would it NOT be acceptable to torture him?

These hypotheticals have actually been answered conclusively in reality over years of military and academic study. The highly sophisticated interrogation techniques developed and refined by the US Military, the CIA and FBI over many decades would be infinitely more effective in eliciting truthful, useful information from the terrorist. It is difficult for this point to be made to many simply because of the emotional response from the hypothetical .

Within six weeks of the terrorists attacks on New York City and The Pentagon, a small team of paramilitary CIA operatives were clandestinely inserted into Afghanistan to link up with the Northern Alliance, a rag tag assemblage of tribes and militias who had been battling with the Taliban and Al Qeada for years. If one of those operatives had been captured by the Taliban or Al Qeada, how would we, the US, want them to be treated? Of course, one could argue that if an operative were captured by a non-state entity such as Al Qeada that all bets would be off: terrorists have not signed on to any conventions or treaties. That is so. However, we could expect the government of Afghanistan or some neutral country to intervene and help assure that our captured were treated humanely. This may seem to be an unreasonable assumption to many.

It is less unreasonable if we have the moral footing, the strength, that comes from the world recognizing that we do not mistreat POW’s, enemy combatants, detainees of any kind or civilians rounded up in the fog of war. Perspectives such as those presented here must become incorporated into the real debate, the debate our government should be conducting about torture.

Who knows, who can predict what the immediate future in this debate will yield. There may or may not be prosecutions, inquests, international criminal court proceedings, Congressional investigations, Special Prosecutors or Blue Ribbon Commissions empowered to untie this tight, intricate knot. Full disclosure of all the documentation from the Bush OLC and his Administration may become public information that causes a public outcry for some punitive or prosecutorial measures. Again, we could hyperbolically speculate here just as the assholes on the cable networks do ad nausum but, to what avail.

The present and future safety of all those we put at risk who serve our country in and out of uniform should be the guiding principle as the debate unfolds as it most certainly will. Someday it may emerge from the foul, fetid waters of partisan politics and idiotic pundits, and find its way to our highest courts. Until that day comes, we should do our best to be ever mindful of our founding principles and our 235 year history of jurisprudence and conduct during times of war; our long and rich tradition which has its origins in the Magna Carta.

We are a nation of laws and basic decency. We will find ourselves in a variety of disparate conflicts in the future. What transpires now pertaining to all these issues will set the stage for that future.

Please cut and paste a link into your browser. Google has yet to address the active links problem.


Copyright TBC 2009 © All Rights Reserved
Copyright on this post shared with BronxWest Consulting and Palermo Associates, LLC.
TBC appreciates their contributions
Posted by Brooding Cynyc at 11:50 AM