NOT A SPECTRE OF INTEGRITY OR CHARACTER 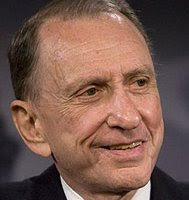 (April 28, Harrisburg, PA) After being elected to the Senate for five terms by the good people of Pennsylvania, Republican, Arlen Specter, suddenly realized, sometime last night, that he no longer believes in electoral politics.

In a news conference he conducted in the Washington, DC at the Capitol earlier today to announce his change of Party allegiance from the GOP to the Democratic Party. The pathetically addled, arrogant, self serving imbecile admitted that his change of Party was one primarily of political expediency. “I do not want to leave my 29 year Senate career in the hands of Republican primary voters”, said Specter. Obviously his move reflects the harsh reality that he is currently polling 30 points behind his primary opponent who he narrowly defeated in 2004.

The crassness of his move is almost without parallel. Perhaps the closest such selfishly, brazen maneuver was when Joe “ The Senate Jew” Lieberman switched from the Democratic Party to register as an Independent after he lost his primary battle against Ned Lamont. Arlen now joins his buddy and fellow spineless scum bag as another traitor of epic proportions. Each of these men were elected by a certain constituency and, once they perceived electoral threats, they abandoned their Party and those who sent them to the Senate.

While all politicians by nature are deceitful, arrogant, power hungry, corrupted , scum bags, Specter’s blatantly obvious change today indicates a profound lack of anything resembling conscience, morals, ethics, character, loyalty or honor. Actually Arlen clearly demonstrated exactly who and what he is and his true colors. How can any Pennsylvanian ever believe another word from this ass wipe?

Of course he also spouted out the tired rhetoric that as his Party has moved so far “to the right”, he found himself philosophically more in line “with the Democratic Party.” he also cited his so called “independent streak” as well as several recent instances when he broke from his party line and voted for parts of the Democratic agenda. he tries to dress up his cowardice and spinelessness in noble terms. His statements fall so flat that they truly defy logic.

Now that the Democrat’s are close to having a 60 seat “super majority” in the Senate, that does not necessarily mean they will actually be able to count on 60 votes for each piece of legislation. Having the seats is one thing, having a unified party vote is quite another. The Democrats should be as wary as wives who have been cheated on; once a wanderer always a wanderer. With Specter it is once a lying traitor, always a lying traitor. He may caucus with the Democrats but how will such a man vote? With whom, other than himself, does he have any allegiance? What principal other than political self preservation does he possess?

The voters of Pennsylvania will hopefully see through this craven act and bounce him resoundingly out of office and into retirement which is where a Senatorial fossil like him belongs anyway.

Arlen did not want to risk his political future by leaving it up to the voters? Well, you tired, old traitorous fool, that is precisely in whose hands your political future rests whether they be Republicans, Democrats or Independents. No one should vote for such a decidedly unprincipled man. No one likes a lying rat. Maybe, Arlen, your little dance across the aisle will in fact seal your fate.