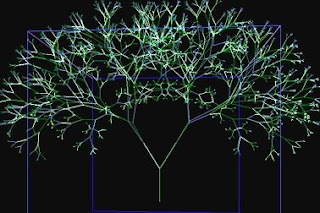 (April 27, Atlanta, GA) Literally overnight all the day to day conflicts, concerns, arguments and routine matters are cast in stark relief by a submicroscopic pathogen. Raging wars, international conflicts, economic crisis and the more mundane occupants of our time and minds cause pause as a new perspective dramatically alters the present. The scale and scope of what this viral entity may reek is unknowable at this time however its potential is potent.

Neither technically alive or dead, viruses, small clusters of proteins and genetic material become active and infectious once inside a host organism. Once in a human, they replicate. Some are relatively benign, others easily recognizable and manageable by our immune systems. A smaller number, particularly those that have shared some of their composite material with other viruses or otherwise have mutated, present serious challenges. What has emerged from Mexico City is a virus known as H1N1, a “swine flu” named such due to its host of origin.

“Patient Zero”, the case that arguably all subsequent cases can be traced back to, is a five year old boy who contracted the virus back in March and has since fully recovered. Why others have died and will die, remains unknown and incalculable for a variety of reasons.

Unlike most similar flu viruses that strike particularly hard in the very young and older members of the population, this current variant has its highest mortality rate predominately in young adults; folks whose immune systems should be able to resist this type of infection to some degree or, at least long enough for the two antivirals indicated for it can be employed. This is just one of the mysteries surrounding this outbreak.

When we read and hear the words ‘epidemic’ and ‘pandemic’ used in discussion of the current outbreak and see images of global travelers wearing face masks obviously concern is our normal reaction. Additionally, we hear the World Health Organization (WHO) and the Centers for Disease Control (CDC) speak about the variables, issue statements about the potential for widespread infection, elevate the “level” of the spread, and increasing infection and death, fear can quickly replace concern and, if left unchecked, cloud judgment and incite further fear.

We live in a world today virtually without boundaries and obviously, pathogens know no borders or boundaries; they cannot differentiate between ethnicity, race, nationality, age, gender or any other of our terms of self description. These are among the oldest of humankind's adversaries and have evolved since the dawn of man. They can be rapacious, insidious and , certainly, lethal. Viruses can spread widely before they are even detected by public health organizations; often way after the cat is out of the bag, so to speak. Fortunately the global response to this outbreak has been rapid and robust. Still, despite the measures nations implement, no matter the degree of effort the medical and public health community exerts, the virus is calling the shots - it sets the terms of battle.

And a battle it may be. Our interconnectedness, our global network of air travel allows pathogens to hitch rides and introduce themselves into unfamiliar populations, populations who have no immunity to these new germs. This phenomenon was coined as the phrase “Jet Set Germs” late in the 1980’s. Epidemiologists use sophisticated computer models based on chaos and complexity theory and algorithms to predict the possible extent of the viral spread. These models have little real time utility due to the nature of the adversary, its ability to mutate and stay one step ahead of the available medical arsenal.

A truly virulent virus with a highly developed capability to evolve could cause a pandemic such as that seen in 1918. It could also “burn itself out’ naturally for reasons not entirely understood. There are several possibilities relevant to this swine flu now traveling the world that range from the best case scenario, a rapid conquest on our part to the worst case scenario which would place the virus in the position as the conquerer.

A global pandemic or even a national epidemic could cause more havoc than a war, a terrorist attack or natural disaster. That is why this is not solely a matter of public health but also of national security. Widespread infection in America could cripple an already ailing economy as well as cause profoundly challenging social ramifications that may have only been poorly thought through if anticipated at all. Who can image the full extent of potential issues pitting personal liberties and rights against mandated quarantine or vaccination?

For now we should all remain calm, the virus thus far has not exhibited particularly aggressive properties although it is difficult to determine with any accuracy what phase of the outbreak we are presently facing.

If nothing else the events of these past few days have helped put other matters into a more proper perspective. Perhaps on occasion we need something out of the ordinary, something foreign, unpredicted and sudden to jar us out of the ruts our mundane lives, despite are many difficulties, to appreciate such a change of perspective.