THE BURRIS IN HARRY REID’S SIDE 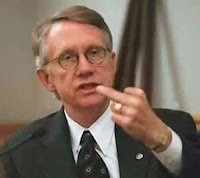 (Jan. 9, Washington, DC) Talk about rock and a hard place. Recently impeached Illinois Governor Rod Blagojevich, appointed his Attorney general, Roland Burris to the once “for sale” Senate seat left vacant when Barak Obama was elected to be the 43rd President. In his last official act ,some would say brazen act, Blago filled Obama’s seat with the well respected Roland Burris. His appointment to the Senate has caused a furor across the board. The addled Senate Majority leader, Harry “I can’t” Reid actually blocked Burris from being sworn in with the rest of the Senate earlier this week. This move has been roundly criticized as unconstitutional, bigoted, and defiant.

The open Illinois Senate seat became embroiled in controversy when it was revealed by Federal Prosecutor Patrick Fitzgerald that Blago had put it up for sale. open to “the highest bidder” stating privately that “it is worth too much to just give away.” Seeking big time money and quid pro quo benefits, the shit pile with coiffed hair saw the seat as his opportunity to make a quick buck. Blago had been charged with numerous corruption, influence peddling, extortion and misuse of office crimes before finally being impeached by the Illinois Legislature.

Initially many Democratic senators stated they would support the legal appointment of Burris only to reverse themselves after the fact. Many long time Senators are claiming that the Blago pick is not valid and should be rejected due to the “cloud of criminality” the seat now sits under.

The Democratic Senate Caucus has found itself neck deep in steaming cow manure, fractured and seemingly poised to challenge Burris’s entry to the Senate overtly denying that Chamber of what would be it’s only African-American member. Obama had been the only African- American before.

The African-American community has been outraged by the treatment of the self proclaimed “civil rights pioneer”. Particularly infuriating was the physical blockage of Burris from even entering the Capitol as the new Congress was sworn in last Monday. Burris and his posse found themselves literally out in the rain.

The true colors of the Democratic Senate have been exposed as this embarrassing, damaging and potentially paralyzing sage has unfolded under the harsh scrutiny of the national media. Burris has not been at all reluctant to appear before the clamoring press corps, not shy at all expressing his consternation and frustration. Some of his public comments have put the onus squarely on the shoulders of the hapless democratic leadership. The senior Senator from Illinois, Dick “Little Dickie” Durbin has found himself mired in the rising tide of bullshit with his hands fully covered by the reeking muck. First he objected to the appointment, then he tepidly approved it, his current position is unclear but, in keeping with his consistently inconsistent, low-browed senatorial record, is ambiguous at best.

For his part the de facto Leader of the Democratic Party, Barak Obama, has not exercised his power in this matter choosing instead to defer to the brain dead, politically deaf Senate dems.

Tyrell Freeman III, long time adviser and counselor to Burris angrily charged, “Mr. Obama appears to have forgotten where he comes from politically. Chicago politics made him, Springfield politics made him and the Illinois African-American population made him what he is today. His lack of strong support for Mr. Burris is a sign of weakness, cowardice and a bad sign for the future.”

Otis Delbert Pike, the Assistant Deputy to the Senior Assistant for the Obama Transition Team quickly responded saying, “I have respected Mr. Freeman for many years. We served time at Joliet together way back in the day. My respect for him is totally gone now, man. To say that President-elect Obama is weak in anyway is just a lot of bullshit. Tyrell knows it, I know it and Barak knows it. We won’t forget this betrayal and, payback is a bitch, know what I’m sayin’?”

Illinois Representative Bobby Rush who defeated Obama in his first run for office, commented, “I’m outraged. You’d think at least we’d have the Lion of the Senate, Teddy Kennedy, the big fat, slobbering, drunk, speaking out for Roland Burris. I guess all the Dems are just a bunch of chicken shit, mothafuckas. Where the hell is Al Sharpton when you need him?”

At this time the seating of Burris in the Senate is held up on a dubious Senatorial procedural requisite. The Illinois Attorney general, says Reid, must certify the Burris appointment by signature. Most senate experts say this is bullshit and not at all required; it is an antiquated option. Nevertheless, the Burris saga is destined to be the turd floating in the Democratic punch bowl for some time to come.