PANETTA TO HEAD CIA?
NO NOSE FOR INTELLIGENCE

(Jan. 7, Washington, DC) Within hours of the leak from the Obama Transition team that former Clinton White House Chief of Staff, Leon Panetta, would be selected as the new Director of Central Intelligence (DCI) harsh criticism was heard from all quarters. Panetta has a long history of serving in government dating back to the Nixon Administration but has no Intelligence experience aside from a brief stint with the US Army Intelligence in the sixties while he was a serviceman.

The Obama camp was quick to respond to the critics and to play up Panetta’s “vast knowledge of the federal government, White House operations and his good standing with many members of the Congress.” Panetta does have a good reputation and his managerial skills are well known. However, with the Nation facing so many complex issues regarding National Security, many in the intelligence community view this Obama pick as naive’, irresponsible, and dangerous. “I don’t know what the hell Obama is thinking. This seems like a purely political decision, the repayment of a quid pro quo type arrangement where Obama is just rewarding Panetta for his help with Obama’s campaign. This really sucks.”, commented Garth Z. Duckworth currently Acting Assistant Chief of Station for Montenegro and Albania Semi Covert Operations. Overwhelmingly the choice of Panetta for such a vitally important position was met with disgust and strong opposition from active duty members within CIA as well as Senators, Congressmen and other intelligence experts.

Anne Hydrous, a top CIA analyst blasted Panetta as a “political creature, a bureaucrat, a number cruncher and a fool. He may have some intelligence himself but, as far as gathering, analyzing and disseminating real intelligence from our agents around the world, he doesn’t know his ass from his elbow. He won’t be able to put his finger on real threats. Certainly we are afraid he will poke his nose in to areas he is grossly unfamiliar with. Plus, he has a huge honker.” 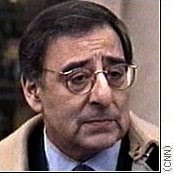 Leon Panetta smells a rat or a stromboli.

Senators on the Intelligence Oversight Committee expressed mixed feelings regarding Panetta’s appointment. “ We really need good, sound Intelligence now. I wish I had some intelligence myself. Getting Intelligence to help us intelligently protect our National Security seems, to me, like an intelligent thing to do”, noted the dimwitted, Democratic Senator Harry Reid of Nevada, Senate Majority Leader who is showing early signs of senile dementia. Senate Intelligence Committee member Diane Feinstien was initially very harsh in her criticism of Panetta but she backed off somewhat later in the day. “President-elect Obama promised to keep her supplied with Botox and Oil of Olay. Once she got word of that, she became more cooperative”, said Rahm Emmanuel, Obama’s Chief of Staff-to-be. He continued, “Feinstien is a Jew like me and I sure know how to appease Jews. I buy them off, give them what they want in order to get my way. Sometimes I have to make them eat pork but, I always get my way. Zion forever!”

“In my opinion, based on what I know about Leon, he will be highly ineffective at CIA. He doesn’t have a nose for intelligence, for sniffing out actionable intelligence. He wouldn’t recognize good, solid information information if it was in front of his nose. Actually,he can’t even see anything directly under his nose!”, commented CIA White House Liaison Cavendish “Cav” Thrombosis.

Former Clinton White House press Secretary, Joe Lockhart, issued a scathing statement about Panetta. “I worked with Leon for many years. he had his nose in everything. Although he is very bright he couldn’t smell trouble brewing when Monica Lewinsky was hanging out and giving head underneath Clinton’s Oval Office desk. With most important matters he would simply follow his nose. He had no choice, anything that had the faintest odor of trouble. he was onto it but usually fucked it all up. I never liked him. I punched him in the nose once and broke my hand. I hope he gets his nose rubbed into reality his first day at CIA.”

If links are not active, please copy and paste the link you want to read. Sorry for the glitch in our system.