THE MARK OF A TRUE PROFESSIONAL:

(Battery Park, NYC, Jan.15, 2009) Demonstrating extraordinary poise and skill as his plane lost power over the most densely populated metropolitan area in the country, US Airways veteran pilot, Sully Sullenberger, made an “unbelievable” water landing atop the frigid surface of the Hudson River. The end results of his grace and superior abilities and piloting proficiency, was the fact that his Airbus A320’s smoothly touched down, the Airbus A320 remaining undamaged structurally floating until all 155 on board were safely evacuated. His steady hand and mind maintained control of the jet in spite of a complete loss of power. Captain Sullenberger then walked the length of the passenger cabin twice before exiting the now partially sunk aircraft.

Those on bard as well as the hundreds of witnesses to the “perfect water landing” expressed awe not only of the sight but also of the pilots skills. “Frankly, I was amazed. I could hardly believe what was happening. It was a bit surreal watching a passenger jet land on the Hudson River. It landed On the river, not IN the river”, stated NYPD Sergeant Donald McDuffy of Emergency Services Unit (ESU) Truck One as it raced towards the lower west side of Manhattan during the plane’s decent.

As the marine rescue efforts unfolded, lead by FDNY, NYPD and the US Coast Guard, all involved as well as the plane’s survivors expressed extreme gratitude towards captain Sullenberger and the Flight Crew. Jimmy Joe Warren of Hickory, North Carolina said, “All the passengers responded calmly once we touched the water. Of course their was some hysteria when the left engine exploded in flames, some passengers were weeping, praying and otherwise going berserk. That all ended when everyone realized we were OK.” 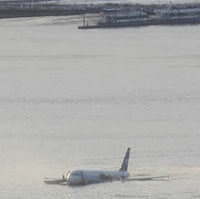 US Airways 1549 moments after landing safely on the Hudson River.


Due to the “textbook” perfect water landing the Airbus A320, the aircraft became a water craft. The plane maintained buoyancy primarily because the fuselage was uncompromised. Sully was able to keep the nose of the jet raised while the tail made initial contact with the river. Sully had not lowered the landing gear which prevented the plane from skidding one way or the other. Had the plane hit on an angle as opposed to straight on, the plane could very easily have sank upon landing. “If a wing had cut into the surface on landing, that jet could have fishtailed violently or the plane could have starting to sink rapidly” noted FDNY Captain Angelo Sciniscallchi who maneuvered his vessel, FDNY’s Marine One fireboat upriver towards the floating jet. He continued, “ I have witnessed hundreds of acts of grace under pressure in my 27 year career with FDNY, and I count this pilot’s actions among them. He literally saved their lives. God bless him.”

Editors note: Due to the strong relationships The Brooding Cynyx enjoy with FDNY and NYPD, we will be able to provide our readers with some additional in-depth coverage of the rescue efforts by some of those who participated. We give our utmost respect and thanks all our brothers and sisters, MOS, of those fine Departments. They are simply “The Best in the World” at what they do everyday.