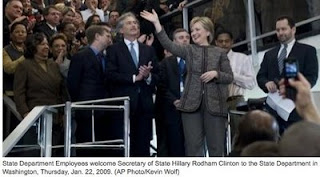 
(Jan,22, Washington, DC) Hillary Clinton began her tenure as the Secretary of State today. Once, President Obama’s most tenacious, vicious rival for the office he now holds, for some reasons known only to him, he appointed Hillary to head the State Department. Perhaps Obama’s move was a variation of the “keep your friends close, and your enemies closer” principle.

As these two former Senators waged full out war on each other during the Democratic Primary run, Mrs.Bill Clinton was most aggressive in attacking Mr. Obama on his foreign policy ideas and experience. She leveled her harshest, most vile, dirty tactics in this particular area; an area in which she know doubt perceived weakness. Now, President Obama is her boss. She is the Secretary of State, a post in which her main role should be as a vocal supporter of the PRESIDENT’S FOREIGN POLICY. The great concerns in the Obama inner circle are that Mrs. Clinton will be a loose cannon, and a real thorn in the side of President Obama.

There is speculation in some quarters that Obama is setting Hillary up in a brilliant way. Highly placed members of Obama’s innermost circle of advisers and counselors, speaking not for attribution but with knowing looks contend that “Once Hillary steps out of line, which she most certainly will, President Obama will slap her down and slap her down hard”, said one such source.

“She will be publicly humiliated and hung our to dry. Not only will she be booted out of Foggy Bottom right on her soggy bottom, she will be ruined. No Senate seat to scamper back to, no public pulpit from which to blather from. She will find out very quickly that, frankly, no one really cares about her or what she has to say. She will be left to sit in her own bitter, arrogant, spiteful juices until she is a drooling, demented wreck,” commented another. 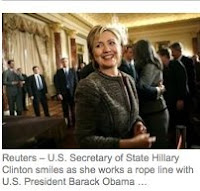 Ever the shrewd politician, Hillary made all the right moves, arranged the right photos ops and dispassionately mouthed all the right words. It was one big happy family of career foreign service employees; all smiles as she gave them permission to do their jobs, get pumped up to actually 're-ignite' our diplomatic efforts and be strong again.

Some of the bullshit Hillary spouted today at the State Department.


After the TV cameras were packed up and the gathered press corps went for drinks, the atmosphere at State noticeably, dramatically changed. Gone were the smiles and cheers; replaced by the doubts and a powerful sense of resentment that Obama had dumped Hillary on these dedicated folks. “I hated her when she was First Lady, I hated seeing her as a Senator, I despised her gutter politics primary fight and I hate her now,” said Lloyd F. Landis, a long time State Department employee, who was on his way to file his retirement papers before Clinton had left the premises. He continued, “Obama had a real mandate after he won the election. When I first heard rumors that he might be thinking about having Hillary Clinton over here at State, I threw up. I spent the next week in a drunken rage, burned all my furniture in the driveway and divorced my wife of 27 years. After all that was finished, I knew I would resign the day she brought her big, pantsuit covered lard ass into this building. I’m moving to Estonia to be a sculptor.”

Former Secretary of State, James A. Baker, who held the post during the George H.W. Bush Administration told reporters from his office in Houston, “That place will eat her alive. She simply does not have the temperament, personality or skills to deal one-on-one with world leaders. She won’t be waltzing around the world visiting young girls in remote African villages or reading to children in Indonesia as she did as First Lady. Nope. She will wake up right quick and maybe, if she has any brains left at all, will realize she is so far in over her head that the only logical thing to do is resign.” Baker added, “I pity the dedicated men and women in the State Department and our Foreign Service officers around the world. Don’t be surprised if there are mass retirements. No one I’ve spoken with thinks Hillary is trustworthy. The common thought in Foggy Bottom is that Mrs. Clinton is profoundly lacking in anything close to practical diplomacy, cannot get along, much less manage people, and is a selfish, arrogant,lying, snotty bitch. She wanted it, well, now she’s got it. Let’s give it a week and see what happens.”