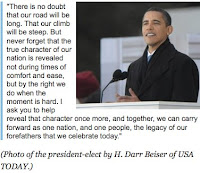 THE TREK UP THE MOUNTAIN IS
ALWAYS LONGER THAN THE FALL DOWN.


Go easy on the partying: Day One will be sobering enough.


(Jan.18, Washington, DC) The Brooding Cynyx, (at least 50% of us), join with the rest of the American’s anxiously awaiting for our newly elected President, Barak Obama, to assume his position behind the desk in the Oval Office. As our 44th President, he will face challenges not seen since the Civil War, the Great Depression or World War II. Hopefully, he will aggressively engage these challenges thoughtfully, carefully and have the gift of clarity as he accesses reality.

Today an estimated 750, 000 people crammed into this town and tried to squeeze onto the the Great Mall to catch a glimpse of the star-studded lineup helping to usher in what many hope to be “real change” in how we are governed. The Inaugural galas, hoopla's, parties and celebrations should be concluded by Wednesday, the first official day of the Obama Presidency. As the confetti is being swept up, the grandstand disassembled and the revelers travel home, this man will take upon his shoulders enormous responsibilities. People tell pollsters they will “give him time”, that he is going to be granted a “honeymoon” period, and that they all realize that “change will not happen over night.” If these sentiments are as true as most supplied to pollsters, they are just a load of bullshit. It won’t take long for the media, the punditry and the public to get grouchy, impatient, and churlish.

A MOMENT OF HISTORY, OK. NOW, LET’S GET ON WITH IT

As freshman Senator Obama began to have success in the campaign, the analogies, symbolisms and hyperbole grew exponentially with each primary victory. Certainly there is no denying the historic component of his election to the Presidency; perhaps some tempering of the talk is in order. Yes, indeed, he is an African-American, a Black man, the first of his kind to be our President. Absolutely. However, Obama himself tried not to employ the race card and very deliberately maneuvered to keep some distance from it. He ran gracefully, humbly, appealing to all Americans across racial and regional divides. His intention to be a President for ALL of America” has been proclaimed loudy and often. Good, that is what ‘s needed. The last decades of rancorous partisanship and disengagment from average American’s has taken a heavy toll on all of us.

What we do not need now that “this time has come” is to dress this up as an achievement for the entire African American population or “people of color.” It would be too easy for them to think that his personal ascent is in some way redemption, justice: a triumph for them all. It is too easy to adorn this moment and this man with a significance he did not seek. Of course the symbolism available has been too good to resist: speaking on the steps of the Lincoln Memorial, overlooking the Great Mall as did Rev. Dr. Martin Luther King, Jr., his inauguration being the day after the MLK federal holiday, a generation removed from the courageous MLK’s famous inspiring and inspired from the very same locale. Yes there is symbolism aplenty, but, let the symbolism and historic talk cease immediately after President-elect Obama removes his hand from the Bible. (Yes, he will use a copy of the King James Bible to take his Oath of Office.)

It was time for a young, intelligent President who can communicate with the public effectively and steer this, OUR nation, in the polar opposite direction the Idiot-in-Chief George W and his boss, Dick Cheney, disastrously lead us into. Misters Cheney and Bush and all the other scumbags they surrounded themselves with made “this moment” possible. The weary, stressed, distressed, and suffering chunk of the population finally awoke to the idea that now was NOT the time for ideology and anymore of all the other bullshit Cheney/Bush unleashed on us and around the world.

We all sought change and we all recognized it in Barak Obama. It just so happens that Mr. Obama is Black. That’s it, plain and simple. The diverse block of voters who pulled the lever for Obama did not do so with the deliberate intention of electing a Black man. No, they voted for him out of pragmatism and a bone weariness of the same old faces and the same failed policies dressed up to appear different. They saw through the facades of the Hillary’s, McCain’s and those they would surround themselves with.

Yes, we have a new President who happens to be African-American. This is a victory for us regardless of how much the world wants to view this as the advent of a “New America.”

We will be the same America as always, in many, many ways; just fortunate enough to have new leadership, new blood, and (hopefully) new able people to meet our many challenges at home and around the world. Yes, it is sorta neat that we have a Black President if only to put the final nail in the coffin of all the whining about our “racist” society. We should all be proud that at least we were able to vote in a “colorblind” manner hoping to realize the change that is so long overdo and desperately sought.

The Brooding Cynyx, as one, say Godspeed Mr. Obama, may the Good Lord guide you and,
May God Bless America. 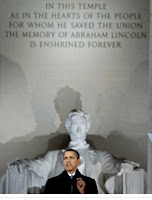 Obama in the shadow of Lincoln 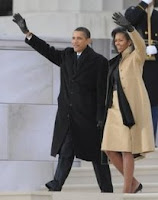 Barak and Michelle Obama. Please, do the Right Things.


Some interesting links, some alternate opinions that we respect.