NEW COALITION OF THE WILLING:

AMERICANS MORE THAN WILLING
TO SHOW GEORGIE THE DOOR

G.W., Defiant To The End
displaying his characteristic disdain for us and the world.

(Jan. 20, The Capitol, Washington, DC) In under 90 minutes Barak Obama will be our President. After eight years of the George W. Bush Administration, we emerge tattered and torn in every way. as a country and as individual citizens. All the adjectives, analogies, metaphors, analysis and perspective produced by politicians, world leaders, the media and pundits, historians and observers have proven inadequate to define the scale, scope, and repercussions of monstrous damage our boy-idiot, GW, has wrought in the United States and around the world.

There really is no need to be redundant; we all recognize on some level how far we have sunk. that we have been brought to the brink of collapse by the Cheney / Bush policies, practices and ideology. Wars, one of which was a war of choice, our imploding economy, global financial collapse, health insurance costs, the highest unemployment in 17 years. The list is long, ominous and now about to be dumped on Mr. Obama. 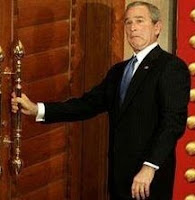 The most anticipated exit of a President in history.

In time, we will be the America we have always been. President Obama will not be the the Messiah, he will be just a catalyst. We will stand again as a Nation and as individuals. Obama will (hopefully) introduce and enact practical policies that will set the stage for our recovery and resurgence. He CAN take an aggressive, hands-on approach to manage our financial / economic woes, work to make health care available, affordable and more equitable. He CAN bring our troops home from Iraq, insure the best benefits possible for our vets and their families, and finally decide reasonably the methods by which those held at Guantanamo will be adjudicated or released.

Bush, Cheney, Rice, Rumsfeld, Feith, Wolfowitz, Pearl, Gonzalez, Fleisher, Snow, Perino; the entire maniacal Administration and their ilk will no longer be able to inflict us harm. If we are to move forward,restore our institutional and Constitutional integrity , some of these lunatics will face justice for their crimes in a court of law.

Perhaps Ronald Reagan and the strategy employed to place a buffoonish, Alzheimic, former B-list actor, GE spokesman and minor league baseball radio announcer, to the highest office in the land made George W. Bush possible. Reagan was just a figurehead; his advisers ran the Administration while he sucked on jelly beans and shit in his diaper. They would shoot him full of amphetamines and Geritol to trot him out before the cameras only to read from a script to announce whatever his hacks told him to. Reagan broke the ice and wind for future big money backed political neophytes, zealots, and moronic ideologues, using the ultra-dirty GOP campaign tactics, to sit in the Oval Office. Now, after we have lived through the erosion of every defining principal, every branch of government, our trust in those we elect to serve our collective, common interests, we will never be fooled again. Politics is NOT government; at least it shouldn’t be. It should be about character and competence. We will shortly see if our new President and his Administration are capable of exercising both.

Good bye Mr. Bush. May you and yours begin to feel the cancerous misery we have felt and may you and yours someday rot and burn in Hades. Their is a nice ranch on The River Styx for sale - immediate occupancy -no money down -cut rate mortgage and all the amenities you’d need. You are pre-approved.

Copyright TBC 2009 © All Rights Reserved
Posted by Brooding Cynyc at 10:32 AM