A RANDOM MORNING IN SEPTEMBER 15 YEARS AGO 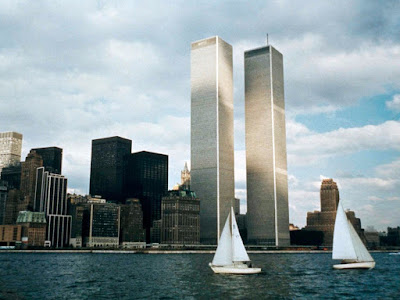 THE BROODING CYNYX HAVE NEVER AND
WILL NEVER  POST ANY PHOTO OR IMAGE
OF THE WTC TOWERS FROM 9/11.
IT HAS BEEN AND ALWAYS WILL BE OUR POLICY
TO USE ONLY PHOTOS THAT
PORTRAY THE WTC AS THEY WERE AND,
AS FAR AS WE ARE CONCERNED,
OUGHT TO BE RECALLED

(September 2, 2016 120 Cedar St, NYC) There are many shadow in this neighborhood; these narrow streets are among the oldest in our City originally cobble-stoned by the Dutch settlers who purchased Manhattan Island from the Natives for a pittance.  The narrowness of these shadowy canyons shouldn’t let anyone assume that the buildings that block the overhead sun aside from a few brief minutes each noon are inconsequential.  This is just one border of the famed World Financial Center with the “catchall” Wall Street, as the heart and soul of commercial finance, banking and trading.  Here, on Cedar Street is O’Hara’s an old time NYC “Irish Pub” in the classical sense of the term.  It’s a fine place for a power lunch or for happy hour Monday through Friday; dinner is as good but the joint closes around midnight.  For a Manhattan bar O’Hara’s is almost an unheard of oddity but it is common for establishments in this part of Town that rely on the “Wall Street Cro

Between the end of lunch and before the after work rush of commuters wedging a few quick drinks before heading out to the suburbs and home, this is a bar that knows how to treat a single patron.  Good drinks at a fair price, bartenders who actually know how to tend bar while delivering fine service for the lone drinker.  On this first Friday of September, a month many of us had come to dread, we met here for a few cocktails and to catch up.  Some of the cohorts had long since retired; others of us were still On The Job.  This early September gathering had become an annual ritual that began in 2002.  It began casually enough but has persisted for 14 years.  After a few drinks, a couple of bad jokes, and some plain old bullshit small talk the conversation shifts and becomes focused; an individual set of memories that are at least collective in their experiencing, that craft the images, sights, sounds, smells, tastes, loss and anger into a cohesive telling of that which can only be told by those able to tell it.  This is not a conversation for outsiders and the memories given voice will never be heard by ears that did not hear what this small band of comrades did on that painfully clear Tuesday morning, that day of infamy, September 11, 2001.

Next Sunday will mark the 15th year since the terrorist attacks on our City, Towers, and Country.  The events of that day and the immediate aftermath have altered the passage of time for some.  In ways the time since then has been elongated by the continued sense of sorrow and loss.  In other iterations time has been compressed as survivors have watched children grow and mature; perhaps humans never again undergo a more important 15 period of their lives. Humans go from newborn infancy to the adolescent threshold of young adulthood in the first 15 years of existence; from complete dependency to a rebellious stage as they attempt to find some measure of independence.  No matter how you cut it, 15 years is a long time and the fact that for many families of the 9/11 deceased, these past 15 years have been a disorienting trek.  It is for this reason, if no other, that it is vital to keep our memories of those prematurely taken alive and vibrant.

Our small cadre of greying MOS knows the gravity of remembrance.  It has become a duty, a Sacred Duty at that, to keep the memories of those we lost alive.  Not in the hyper-sensational portrayals of bumper sticker slogans and “Salute To Heroes” banners.  No, our Sacred Duty is to the men and women we knew, men and women some of us depended on for our lives over the years before 9/11.  That day was not an aberration, it was not in any way unusual.  Every day before and since 9/11 MOS respond to the calls that come in; the incidents, the conflicts, the response to the injured, wounded, trapped, suicidal, victimized, scared, and every other scenario under the Sun the men and women of the FDNY, FDNY EMS, NYPD, and PAPD respond and render the assistance they are able to.  The rest of the United States and the media made a large fuss about the unselfishness of our MOS.  What they failed to recognize is that, initially at least, no one among those who responded know the nature of the disaster nor the scale and scope of the calamity that followed in short order.  All MOS where simply doing their job; yet merely by being who they were, who we are, and what we do, that was just another “day at the office” until we learned otherwise.

And “otherwise” it was; an egregious assault on us as Americans in general and New Yorkers in particular.  But we all rose to the challenge from the brawniest MOS to the most slender office worker, we rose to the challenge of an event that we had no way of realizing just how much our world would be changed once we escaped the highly pressurized, noxious-fumed fires of Our Towers.  And make no mistake about it; they were OUR TOWERS…Bless all who perished, all who survived, and those left to mourn unconscionable death…

Posted by Brooding Cynyc at 5:00 AM