OUR CITY, OUR TRAGEDY, AND OUR SPIRIT
STRENGTHENED 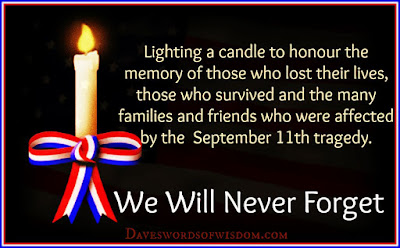 (Sunday September 11, 2016 Battery Park) There are tugboats plying their trade out in the harbor tonight, or more accurately, this small hour of the early morning.  Green and red lights fore and aft drift slowly by in the darkness marking their  progress.  Some are pushing barges from up state, others assisting the huge ocean-going freighters and tankers in docking along Staten Island and Port Elizabeth.  Funny how sounds travel; distinct sounds like the wail of a tug’s foghorn or the two-toned whistle of an LIRR local heading east.  In the background typically not registered in the ears of a native hums the din of an early Sunday morning; the omnipresent sirens in the night, the low grade snarl of 8.5 million people plus going about their business and pleasure on what began on Saturday night.

This perspective at Battery Park is as old as this island itself.  Adjacent to the Park is Battery Park City; a manmade 18 acres of high rise luxury housing, condos, and co-ops built on the very same soil that was removed from the site that ultimately became the “bathtub” foundation of the Twin Towers known by all as the World Trade Center.  It had been a “win-win” situation; NYC would have the tallest twin towers in the world and the earth removed to make them possible added 18 acres to the southwest front of Manhattan.

To the immediate west lights from New Jersey seem to twinkle while the views over each shoulder never cease to amaze.  This is a City, Our City, of magnificent skyscraping structures and at night a light show like no other. Our rivers and harbor are bejeweled by powerful yet elegant spans that serve as some of the major arteries to our City’ physiology. In the small hours of the morning the George Washington and Verrazano Narrows Bridges hang like enormous sets of Christmas lights seemingly floating in the dark. Its beauty is subtle and likely lost on tourists but for those of us who grew up in the “outer” Boroughs; those of us who measured the progress of the Twin Towers as those mighty structures were topped out from The Bronx, Brooklyn, Queens, Staten Island and much of the Metropolitan area, in the time of that incredible development upwards, Our Town remains an intriguing nexus of light and energy; a worldwide international City that we are fortunate to be able to call home.

Today, on this particular Sunday morning we still see the void, we feel the absence of our proud WTC and we recall the events from this date 15 years ago.  Yes, there is a magnificent structure occupying a place adjacent to the same footprints of our old Towers and it is a grand sight to see.  But it is a replacement, it will always be a replacement, the “what came after” soaring single shard of steel, glass, immensely fortified concrete and light erected since our Towers were attacked and toppled by acts of evil that still make our blood boil.  But Manhattan, New York City, could not tolerate nor accept the void left after 9-11-01 for too long.  It was imperative on so many levels to rebuild, not duplicates nor replicas of what had stood; but some other bold soaring edifice determined to stand as proof positive that we’d not be cowed.

In a few hours’ people will begin to assemble just a few blocks from here.  The Twin Memorial Pools etched with the names of our deceased, all those who perished in our Towers 15 years ago will be the focal points for the ceremonial Remembrance and Memorial service.  There will be the now routine rituals commenced and observed; the same displays of Sacrament and Sanctity that have come to define this date in our City’s history and so many of our personal lives. Probably, it will always be this way on this day as well it should be.

There are times and places in our City that can make us feel dwarfed by the landscape.  We are, after all, the most densely populated 326 square miles in the United States that just about 9 million diverse and disparate people call home.  We can walk through our famous, infamous and nondescript avenues and streets, made small by the soaring buildings as well as the five-story walk-ups that comprise the rich neighborhood topology of the “City that never sleeps” cognizant that we live in the literal and virtual center of the universe as we understand such a dimension. And, as such, from a distance, the rest of the country and world bore witness to our greatest moments of terror and triumph, of sacrifice and salvation; of tragic, inexplicable death ameliorated by selfless sacrifice, virtue and valor.

Turning away from the inky night time river walking north towards what is truly “Hallowed Ground”, one cannot but ponder over the vicissitudes of life; the circumstance and happenstance that are carried along on small gusts of unknown winds. The very nature of our mortality, the “human condition” hang in the background, the sub- and unconscious and, if we permit it entry to our consciousness, we come face to face with that as a linear border, the virtual chronology of our lives thus far.

One of our most problematic conditions is the irrefutability of randomness in all our lives; it is randomness that we most often seek to control by planning, saving money, all the activities that are predicated on a continuing supply of tomorrows.  Certain scientists contend that order can emerge from chaos; that complex systems of every type are actually by their very nature machinating towards equilibrium.  The Law of Thermodynamics is the final arbiter in this particular equation and will remain so until their veracity is proven otherwise.

For now, the fact that dawn will break over the eastern horizon in a matter of hours seems a sure bet.  It likely will.  The uncertainty is will we all be able to see it, to experience another day.  Among all the why’s and what-ifs that still smolder in some hearts about the shear callous uncertainty of that sunny Tuesday morning exactly 15 years ago today, today will always be a time to stop, become still, catch your breath, and realize the concave fragility juxtaposed with the convex resilience of life that ought never be taken for granted or squandered.  Yes, these are hard concepts to hold close to the bone as we go about the routines of daily life.  But we are neurologically and emotionally wired to keep randomness and chaos at bay.

We offer our sincerest prayers for all the deceased, their families and friends as we honor them in a formal regimented manner that has become an annual rite of passage.  From the Roman Catholic catechism regarding Extreme Unction it is written:

"Is anyone among you sick? He should summon the presbyters of the church, and they should pray over him and anoint [him] with oil in the name of the Lord, and the prayer of faith will save the sick person, and the Lord will raise him up. If he has committed any sins he will be forgiven."