OUR SEASON OF GRIEF AND GRACE 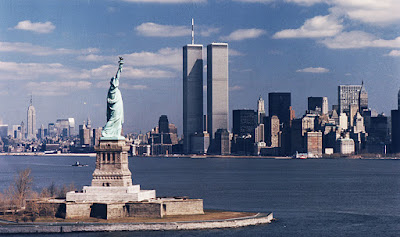 THE TIMELESS BEAUTY OF OUR TOWERS AND LADY LIBERTY.

NOTE: IN PLACES IN THIS ARTICLE WE USE THE TERM MEN AND OTHER MASCULINE DESCRIPTORS.  THIS IS NOT MEANT TO


IGNORE WOMEN, IT IS EMPLOYED MERELY AS A WRITER’S DEFAULT USAGE FOR “PEOPLE”.


MIGHT CONSIDER AS A DIVINE DIETY, HIGHER POWER, THE PROPHET, SAVIOR, OR ANY OTHER


“SUPREME BEING” NO MATTER WHO ONE WORSHIPS OR NOT.


GRIEF AND SORROW, ANGER AND FRUSTRATION,

(September 1, 2016) Across all major religions of the world including Buddhism, Christianity, Hinduism, Judaism, and Islam, there occur times in the calendar year designated for particular observance.  Some are preludes to Solemn days of remembrance; others times for sacrifice, fasting, atonement, and repentance.  In Roman Catholicism the seasons of Advent and Lent are times to prepare to mark transcendent events such as the Birth of Christ on Christmas and Lent that ends with the triumphant rising of the Lord Jesus from the bondage of mortal death respectively.  Those of the  Jewish faith observe Yom Kippur ; members of the Islamic faith have Ramadan to get their spiritual house in order.  The practice of religious observances occurring over a proscribed finite time period is as common among the various denominations and faiths as is the article of faith that teaches the truth of a Higher Power as master of the cosmos and humanity.

Over the course of the past 14 years many of us have struggled seeking our own meaning in the time marked from September 1st until September 11th.  The pain and anguish from that September 11th in 2001 has not been lifted from our consciousness although in many regards, as a sheer survival mechanism the routine of the days and weeks, the months and seasons can help keep our darker emotions at bay.  But once September lands, when we turn that calendar page, and catch the first glimpses of the coming Autumn in New York; that vibrantly clear pastel blue of a cloudless sky, we feel the initial stirrings of the next 10 days, the days that are both a commemoration and remembrance; celebration of lives lost, sacrificed, and saved as well as survivor’s existence forever altered. Yes, that season is upon us once again and with it comes the rekindling of the rawest of our emotions and memories, our collective efforts and individual experiences and it is these that demand our attention while we ought not “self-censor”.  There is no timeframe for grief; no proscribed period of mourning or sorrow.  Repressing whatever emotions are stirring within today will likely find other means to be heard.

The old adage that says “There are no atheists in a foxhole” speaks to people who find themselves confronting a scenario where their survival is not at all guaranteed.  Be it overtly acknowledged or not, most of the Members of Service (MOS) of the FDNY, NYPD, and PAPD have some degree of a religious/spiritual beliefs.  There is a long and storied history of the Irish and Italian MOS whose adherence to much of the Roman Catholic church doctrine is expressed as members of various groups and organizations such as the NYPD and FDNY Holy Name Societies, and many others.  Cops and Firemen live with the omnipresent specter of their own mortality which seems to strengthen an individual’s faith; faith, not necessarily being a “practicing” Catholic for example, but rather a personal understanding of and a relationship with a Higher Power.

Among the casualties of that September 11, 2001, was, for some, their faith.  Amid the good fortune for those who managed to escape the impending twin collapses that transformed our majestic towers into 110 story death traps, many prayers of thanks and gratitude were expressed, as even more fervent prayers were offered for the missing.  Despite the sincerest prayers anyone could beseech, for the families of over 2,600 victims, their God answered “No”.  Prayers of hope suddenly turned to raging anger to the God of their beliefs.  A sense of betrayal infected some and, even today, for many that infection has never been eliminated.

One of the most essential beliefs that spans across all denominations is that God has a plan; a very specific plan for each of us and that He has no intention of sharing it with us.  This is the article of “blind faith”; a version of faith that is meant to provide succor and comfort in the face of the most horrendous sorrow.  A newborn child enters the world with a malignant brain tumor.  How could this be part of any sort of a “plan” allegedly crafted by a loving and merciful God?  Of the hundreds of FDNY MOS who entered the Twin Towers that morning 343 did not escape. And this was God’s plan for them and their families?  Yes, the questions are unvarnished and accusatory.  Now 15 years out from that day many among our community have yet to come to terms with what was supposed to be “God’s Plan” while harboring an anger of epic proportions.  Yes, the events of that miserable day strengthened the faith and resolve for many thousands and it also broke the covenant of their faith for many thousands more.  It is ok to be angry but, it is also sad in many potent ways.  It is particularly treacherous for a person who once knew faith and has lost it.  But this is understandable.

The sounds of the Celtic highlands, the bleating bagpipes accompanied by drums sound particularly crisp and clean as they rebound off the stone facades that line the route of the annual NYC St. Patrick’s Day Parade.  Both the FDNY and NYPD have their own Pipes and Drums organizations.  Aside from parades and other official appearances, the Pipes and Drums attend the burial service of every MOS who dies (in most cases and possibility more routinely with the FDNY), be they active or retired.

The wailing of the Lone Piper standing a distance from the family and friends about to commit their loved one to the earth is a powerful and emotional, particularly haunting sound.  Just as when “taps” is played by a bugler, these sounds stir the listening soul and evoke memories.  The sense of profound lost is carried aloft only to remain as yet another memory of the deceased.  For many of us, it is fair to say, we grew to hate the sounds of the bagpipes.  We became conditioned to despise the rhythmic beat of the drums.  There was just too much sorrow, far too much loss.  The funerals seemed to never end; but, as some of the efforts at “The Pile” in the earliest days, we became obsessed with attending as many as we possibly could.  Was it some hint of “survivor’s guilt” at play?  Where we driven by a strain of “survivor’s remorse”?  Whatever the forces propelling us to attend services, wakes, visitations, funeral Masses, would soon be replaced by standing in for and standing up with young brides whose Dads were not there to walk them down the aisle. We stood in at ballgames and birthday parties, Communion and Confirmation rites, and other aspects of the surviving families void, that void left by tragic death.

But, in many ways, it was only right and proper to fill those voids even if only in physical presence, emotional presence.  That was all that could be done.  The victims’ families were forced to embark on the journey of the rest of their lives minus a Mom or Dad, brother or sister, close relative or lifelong friend.  Those are wounds that may never heal despite the passage of time and altering circumstances.

Among the many definitions for the word “Grace” perhaps this one, “a state of sanctification enjoyed through the divine; a virtue coming from God” is the most comforting and it is that touch of Grace that the hymn Amazing Grace seeks to give voice. Yes, Grace saves, Grace heals, Grace can alleviate pain, the scorching pain that no earthly temporal element can soothe.  So, here we are, 15 years down the road from the day that put our world atilt.  For many the axial rotational has not yet returned to the pre 9-11-01 equilibrium.  And so, we can still seek Grace; we can still wander in the shadowed woodlands with a compass that recognizes no magnetic field.  It is a choice but, as we have said time and again throughout these 15 past years, there is no timetable.  Perhaps it is only in the vague concept of Grace, in just a flimsy sliver of hope that Grace will find its way towards those who not only seek it but truly need it.  We survived for reasons that do not include guilt nor remorse.  We just keep on keeping on and try to do better today than yesterday.