USES MEMORIAL SERVICE FOR A SPEECH
ON RACE RELATIONS 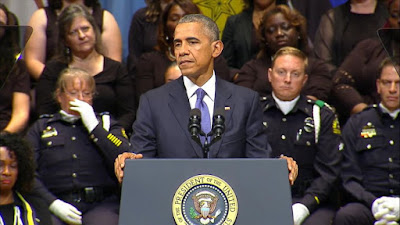 
TAGS: PRESIDENT OBAMA SPEECH IN DALLAS, FIVE DALLAS POLICE OFFICERS
KILLED IN THE LINE OF DUTY, INAPPROPRIATE COMMENTS MADE BY OBAMA,
NO PLACE FOR A SPEECH ON RACE AND COMPLAINTS AGAINST POLICE

(Tuesday July 12, 2016 Dallas, TX) The President of the United States, any President including the current occupant of the Oval Office, bears several titles based on the unique powers vested in that, the highest Office in the land.  He is the Chief Executive of the US and the Commander in Chief of the mighty US Military.  He and he alone possesses great authority such as the issuance of Executive Orders that bypass Congressional approval or consultation.  Among all the Presidential powers and titles there is no expectation nor recognition codifying he be the “Healer in Chief”.  Yes, the President has the prerogatives that come with the “Bully Pulpit” of that exalted Office. It is good and proper that a President address the citizens at times of crisis and tragedy.  Some have been more effective in this duty than others.  This President, Barack Obama, has often found himself confronting circumstances that require a very high degree of verbal deftness and oratorical dexterity.  As the first African American President he has been forced to shoulder unusually high expectations during times of national unrest. Every element of every speech is dissected for his choice of words and phrases, his references to Scripture, and even the basic cadence of his delivery as well as the appropriateness of any speeches contents and context.

President Obama came here today to participate in an interfaith memorial for the five Dallas Police Officers killed in the line of duty last Thursday night just as a peaceful march against “police brutality” was winding down.  In a show of unity, he was joined on the dais by his predecessor, George W. Bush.  The audience was comprised mostly of family and friends of the fallen Officers as well as local political leaders and representatives of the Law Enforcement Community(LEC) from across the country.  Granted, this was a tough audience and President Obama had a tough task in finding an emotional balance in his remarks without sounding like just another politician delivering just another speech.

He began strongly enough taking the first nine or ten minutes of his speech to pay homage to the Officers and acknowledge the perils inherent in their chosen profession; of the self-sacrifice, bravery and courage it takes to do that job day in, day out often confronting violence, hostility, and blatant disrespect while carrying unusually high expectations.  He did recognize that we ask too much of our LEC.  He could have ended his speech at that point and it would have been touted as an effective piece of rhetoric that did in fact strike that sought balance.  But, he did not end at that point.

President Obama then sharply veered from the solemn sentiments the service called for and launched into a repetitive, undisciplined, lecture on the social ills beginning with, “If we are to sustain the unity we need to get through these difficulties, if we are to honor these five outstanding officers who we have lost, then we will need to act on the truths that we know …  America, we know that bias remains” …  Then, the President of “all the people” began a mildly impassioned defense for the Black Lives Matter movement by giving voice to some of their basic grievances, their rationale for existing and protesting as they do, “We also know that centuries of racial discrimination, of slavery, and subjugation, and Jim Crow; they didn’t simply vanish with the law against segregation. They didn’t necessarily stop when a Dr. King speech, or when the civil rights act or voting rights act were signed. Race relations have improved dramatically in my lifetime. Those who deny it are dishonoring the struggles that helped us achieve that progress”.  From that point on the President disrespected not only the five Officers so callously murdered last week but also the men and women of the LEC writ large.  The President’s remarks about the state of race relations, the widespread distrust of the Police in the Black Community, the litany of social pathologies that continue to plague most inner city African American neighborhoods as well as other locales far and wide, were better suited for a different forum; just about any other forum than the time and place he unfortunately chose to deliver them.

Posted by Brooding Cynyc at 5:32 PM

Email ThisBlogThis!Share to TwitterShare to FacebookShare to Pinterest
Labels: FIVE DALLAS POLICE OFFICERS KILLED IN THE LINE OF DUTY, INAPPROPRIATE COMMENTS MADE BY OBAMA, NO PLACE FOR A SPEECH ON RACE AND COMPLAINTS AGAINST POLICE, PRESIDENT OBAMA SPEECH IN DALLAS