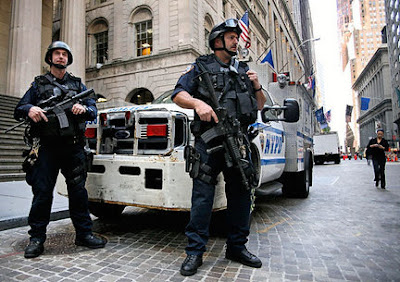 NYPD ESU Officers in the Financial District:
A very familiar “Show of Force” since 9/11

(Wednesday July 13, 2016 Rodman’s Neck, The Bronx, NYC) The stories and anecdotes of similar instances were beginning to pile up.  More and more MOS (Members of Service) of the NYPD were experiencing a clear and present danger on the streets.  While the Cops carried 38 caliber six shot “wheel guns” they were encountering armed criminals with superior fire power: and the criminals were more than well aware of the advantage they had in this imbalance of weaponry.  Reports were becoming more commonplace about how the 38 caliber rounds would just “skip off” or ricochet off a car’s tempered safety glass.  The 38 was a fine weapon for close contact but no longer an adequate gun for the streets.  After years of increasingly heated debate finally, in 1994, the NYPD was granted permission to carry 9mm semi-automatic hand guns. This was at least a modest effort aimed at balancing the equation on the streets when MOS had to “fight fire with fire”.  Some patrol cars with shotgun certified Officers carried Ithaca 37 shotguns which have been phased out by the Mossberg 590 as the replacement.

NYPD’s elite Emergency Service Units have always had heavier weapons at their disposal.  The most heavily armed officers today are in the Counterterrorism Bureau.  In Units such as Atlas, Cobra and Hercules, the MOS are often deployed as a massive “show of force” at various high value targets throughout the City; in our transportation hubs and airports as well as at mass gathering events such as parades.  It is safe to say today that NYPD can meet force with equal if not superior force.  It is a sad fact of the day that we need such heavily armed Officers highly visible in public but, we are, after all, in a “wartime footing”.  The zealots practicing heinous acts of violence and terrorism in many Western countries as well as throughout the Middle East, the Asian subcontinent and in dozens of other locales in the name of radical Islamic extremism require our constant vigilance and displays of force. 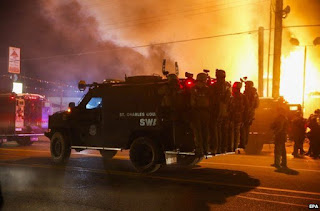 The term may have been used in certain circles but quickly entered the public lexicon when riots erupted in Ferguson, Missouri in the wake of the August 9, 2014 shooting death of Michael Brown, an unarmed Black man and a White Police Officer Darren Wilson.  As images of the ensuing unrest many of the commentators and members of the gaseous punditry criticized what they saw as the “militarization” of the Police. They expressed self-righteous alarm because the Police Officers assigned to crown control and maintain order wore body armor, carried heavy weapons and deployed “military type” armored vehicles.  The particulars of that tense, hot week are not important here.  What is important, however, is the clear lack of understanding of those of a certain mindset that our Law Enforcement Agencies (LEA) have dangerously morphed into an “occupying force”.  Perhaps the vocal critics of the Police, their tactics and strategies need a bit of a reminder of the value of the equipment modern policing in this age of terror utilizes.

After the April 15, 2013 bombings at the Boston Marathon, one of the assailants eluded capture for until April 19 as the police narrowed their search to a 20 block area of the Boston suburb of Watertown.  As authorities cautioned the residents of the area to “shelter in place”, an unprecedented manhunt was conducted.  Law Enforcement, using armored vehicles were finally able to locate Dzhokhar Tsarnaev, the younger of the two brothers responsible for the marathon attack, and take him into custody.  More recently there have been incidents such as the horrific mass shooting of 49 revelers in a club in Orlando, Florida as well as the ambush of five Dallas Police Officers that required the employment of “military grade” hardware to bring standoffs to a resolution without further bloodshed of the innocent public or Police.  As one veteran NYPD ESU Detective commented recently, “God help the jurisdiction that does not have access to what they call military hardware if a terrible event happens on their turf.  Then the public will be crying about why the Police didn’t have the so called military equipment at their disposal”.

Our robust military-industrial complex has been in full operations since 2001.  They have had to produce all manner of the tools of war from the most basic to the highly sophisticated technology available. As troop levels in Afghanistan and Iraq have been drawn down over the last few years from the days of the heights of these conflicts, there has been an enormous surplus of military equipment returned to the domestic military bases.  The mass production of this equipment has only slowed down more recently.  Given this huge surplus of items ranging from generators, automated sandbag fillers, water and fuel tankers, construction heavy equipment and materials, to up-armored vehicles of every type, the federal government has made much of this surplus available via grants and gifts to State and Local Law Enforcement, FEMA and local Emergency Management Departments, the Red Cross, and other disaster preparedness and response organizations.  Yes, many State and County Police Departments have benefited from this program.  If our recent past and the events we see abroad have taught us nothing, we should at least realize the need to have our LEA adequately and properly equipped; yes, we are on a constant war footing when it comes to the war on terror.

Not every Police or Sheriff’s Department in the country has received this equipment but they, at least, have access to it through the larger jurisdictional LEA such as State Police and the closest large urban area.  Clearly cities such as ours, Washington, DC, Los Angeles, to mention the most prominent, have Officers highly trained on these military surplus weapons and equipment.  As so called “lone wolf” attacks become more frequent (as they surely will), the LEA need to be able to protect the public and critical infrastructure by all legal means possible.

Posted by Brooding Cynyc at 6:12 PM