WHEN GIULIANI REBUFFED THE SAUDIS


WHAT OBAMA COULD LEARN ABOUT LEADERSHIP 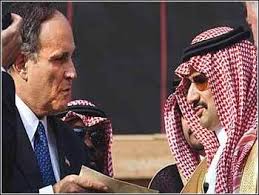 
OBAMA VS THE HOUSE OF SAUD, JASTA BILL, OBAMA VOWS TO VETO

(Thursday April 21, 2016 Liberty St., NYC) On October 12, 2001 with the massive recovery effort at the site of the World Trade Center into its 31st day, the unmistakable cloying stench of death permeated the 16-acre site; it hung over that mammoth pile of wreckage like a pregnant thunderhead. For anyone who had spent any time there that is an unforgettable odor:  so powerfully pervasive a scent that the rescue dogs had to be taken off site in order for them to get some rest.  When they remained on-site their highly trained sense of smell would permit them no relief.


Fires still smoldered unseen within the twisted iron, steel, concrete; the pulverized contents of 220 acres of office space and their contents.  Within the debris the remains of hundreds of victims lay yet to be discovered.  The recovery was a painstakingly slow process, at times simple bucket brigades cleared wreckage bit by bit searching for remains.  There was a decidedly solemn tenor to the efforts; we were in many cases seeking to recover our own.  But, of course, the victims were many, their remains precious to the hundreds of families seeking some modicum of “closure” if such a state was even attainable.


As the very ground beneath our feet emanated waves of heat as did the pile, so too our boiling anger remained just below the surface. There was, after all, work to be done, tasks to focus on.  The time for our anger would have to wait.


October 12, 2001 was a day on The Pile just like the 31 that preceded it.   But there occurred an event that was a collective expression of our anger.  Mayor Rudy Giuliani hosted a visit from a member of the House of Saud, the ruling Kingdom of that gulf country, the birthplace of 15 of the 19 hijackers who executed the attacks of September 11, 2001.  Giuliani escorted Prince Al Waleed ibn Talal ibn Abdulaziz al Saud to “Ground Zero “and gave him a brief tour of the area.   The Prince offered a check for $10 million dollars to our Mayor as his family’s contribution to a relief fund for the families of the victims of the attack.  Later that day the Prince made highly charged statements that essentially said that the United States “policies” regarding the Middle East and the “Palestinian brethren” in particular were partially to blame for the attacks.  Upon learning of this statement Giuliani refused to $10 million dollar check and issued a strong rebuke to Prince Al Waleed.


Giuliani appearing on Fox News earlier this week said about that day in 2001 commented, “I was given a check by a Saudi Arabian prince for $10million and he had the temerity to put out a press release blaming America and Israel for the attack on September 11th. I can't tell you what I said when I decided to tear up the check and give it back to him because I can't repeat it on television. His money he can keep and go burn it in hell.”  Giuliani was on air to discuss the recent conflict escalating between the Saudis and the Obama administration regarding a pending piece of legislation known as the “Justice Against Sponsors of Terrorism Act,” (JASTA) that would allow survivors of the victims of 9/11 to sue the government of Saudi Arabia.  This proposed bill has boiled over and has muddied the waters this week while President Obama is on a state visit to the Saudi Kingdom.


The Saudis have threatened to divest themselves of $750 million dollars of assets they currently hold in the United States so that their properties and accounts cannot be frozen in the event that JASTA passes through Congress.  For his part our President has vowed to veto the legislation should it make it to his desk.  His stated rational is that the passage of JASTA would make the United States vulnerable to suits from people in countries where we conduct military operations presently and in the future.  There is a profound difference between state sponsored military action as in the case of our declared military actions against terrorists and the countries that grant them safe haven and a blatant act of terrorism as was delivered onto our soil just a few blocks from here.

Obama has expressed his concern that there may be an errant drone strike that kills innocent people and that such an error could result in a legal suit against the United States.  This is on its face a facile argument in that none of the countries our military is currently operating within, they it be in the tactics of drone warfare, Special Operations missions or more conventional embedding with various countries troops on the ground, all are acknowledged and known military activities that cannot be equated with acts of terrorism.  Our military abides stringently to the Code of the U.S. Fighting Force as well as the Geneva Conventions.  Adherence to the Geneva Conventions alone constitutes the legality in widely adopted international law governing the conduction of warfare.  Terrorism is at the diametrically opposite end of the spectrum between legal and illegal military activities.


President Obama could demonstrate courage and conviction by emulating those traits so evident in Rudy Giuliani in his dealings with the Saudi Royal family.  Is it too much for us to expect our own President to stand up in a dignified and principled, tough yet diplomatic manner?  Yes, sadly it appears that it is too much to expect from Barack Obama.