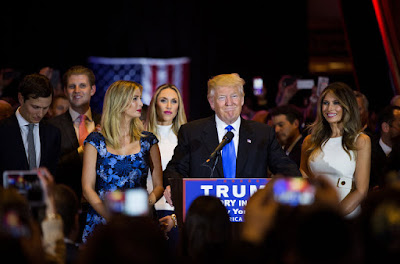 Donald Trump gives a subdued victory speech last night with his
some members of his family at his side.
(Photo courtesy of Damon Winter/The New York Times)


(Wednesday May 4, 2016, NYC)  As late as last week political journalists, commentators, analysts and pundits were leveling increasingly bizarre theories in lame attempts to describe, if not understand, the rise of Donald J. Trump.  One hack scribe went as far as to write that perhaps trump was suffering from “dementia”, some variant of a “personality disorder”, or perhaps some more malignant form of a neurological cognitive pathology.  Since fully immersing himself into the political foray ten months ago, Trump has not only defied the odds, to say the least, and, according to the GOP “Establishment” and modern methods of politicking, been able to do what was unthinkable last June.  He vanquished a field of 16 other candidates several of whom had a whiff of presumptiveness almost as strong as that which emanates from Hillary Clinton minus the unmitigated Hillary arrogance and hubris.

Last night after a pummeling victory over the “least popular man in Congress”, Ted Cruz, the last of Trump’s semi-viable rivals, Cruz bowed out as Trump has all but secured the nomination of the Republican Party.  The afterthought self-styled crusader for the common man Ohio Governor John Kasich will “suspend his campaign” later today.   Like it or not, Trump will arrive at the GOP National Convention in Cleveland with an overwhelming majority of delegates.  There remains in Republican circles an idiotic amount of chatter regarding the “possible” ways the Party can block Trump with some prognosticators and operatives still intent on a coupe d’état that would allow them to wrest the nomination from Trump while installing their own hand-picked standard bearer.  Obviously their arrogance and myopia regarding the political climate and the reality of life for a majority of Americans is boundless.  The harder they have pushed and continue to do so, the harder the electorate has pushed back.  With millions of voters, some of whom have never before engaged in the electoral process, feeling that finally someone is running for Office that, “understands” and “speaks their language”, to behind the scenes GOP political hacks ought to take heed of what Trump’s ascendance has said and continues to say about their collective mood.

While typically not in agreement with the New York Times Editorial Board, in their opinion printed in today’s issue they do offer an accurate, concise, and honest reckoning of just how the corrupt, callously indifferent, ineffectual, do-nothing Congress and the GOP as a Party has given birth to their Party’s presumptive nominee:

“Republican leaders have for years failed to think about much of anything beyond winning the next election. Year after year, the party’s candidates promised help for middle-class people who lost their homes, jobs and savings to recession, who lost limbs and well-being to war, and then did next to nothing. That Mr. Trump was able to enthrall voters by promising simply to “Make America Great Again” — but offering only xenophobic, isolationist or fantastical ideas — is testimony to how thoroughly they reject the politicians who betrayed them.”

For all the outrage regarding the “crude”, “guttural” language as some politicos have classified Trump’s language while out on the stump, he is not saying very many comments and observations that have been bantered about on both sides of the political divide in Washington, DC for decades.  Yes, his terminology and turning of a phrase may sound inelegant to the hyper-inflated egos in that town of double-speak and high-minded bullshit, yet over 6.3 million primary voters could not have cared less.  Actually, Trump’s verbal inelegance in and of itself found a mass appeal that helped propel his campaign.

Professional career politicians secure in their incumbency for years have spoken down to the American people using a wider vocabulary, much disingenuous “code words”, and “dog-whistle phraseology” while expressing many ideas that Trump has taken on in their more polished, poll tested, advisor written speeches.  Some of the vilest sentiments have been spewed in the well of the Senate and the floor of the House but, as long as it was done so using the excepted politicalese common to those once respectable chambers, it was appropriately respectable.  Some of the most egregious examples of white-washing repugnant ideology and crass partisanship, “playing to the base”, and generally showing their contempt for compromise, have been smugly spoken by long time members of Congress and no one, certainly not the Washington media, has batted a critical eye let alone offered condemnation.

THE MEDIA BLAMES THE MEDIA

It has been very interesting to listen to and read various opinion pieces and commentary proffered by a wide range of the mainstream media “elites” as they offer mea culpas and all manner of atonement, confession, and self-castigation some of which comes just short of donning a hair suit.  They blame themselves for the rise of Trump, for their failure to “ask the questions that should have been asked” throughout the bruising primary process and with newfound fortitude have vowed to practice “real journalism.  The irony inherent in this navel gazing pseudo-self-analysis is astounding.  These are, after all, the very same characters who bought the ocean of Cheney/Bush deceptions and outright blatant lies in the prelude to invading Iraq.  There has never in our history been a greater failure of the media writ large than that perpetrated as they became willing partners in a travesty of foreign policy and historically practiced American military doctrine as they eagerly promoted a “war of choice” the likes of which our Nation has never instigated.  The media forfeited whatever remnants of trust that Americans still held for them.  It is that years long series of sinful warmongering that they should be guilt-ridden over and tirelessly examining how they were in fact culpable in the Cheney/Bush fiasco the reverberations of which roil much of the world to this day..  But Trump is, after all, a much easier target.

What remains to be seen is how that very same main stream media will cover the general election campaign of Hillary Clinton.  One would be hard pressed to find another high ranking public figure in modern political history that has been more coddled, handled as generously gently, and outright protected as the former First Lady.  In some quarters it is viewed as a mortal sin to criticize Hillary’s record although it is ripe with dishonest dealings, suspect financial maneuvering, gross negligence while serving as Secretary of State, and her improper use of a private server for classified correspondence in that Office.  Her list of sins of commission, omission, and high and mighty self-aggrandizement is as lengthy as are her many contempt’s she demonstrated with our Military, the Secret Service that has protected her for the last 25 years, staffers and the American people.  Yes, let’s watch and wait.  If the media is legitimately inclined to re-establish some journalistic standards of objectivity and due diligence, that time has come.

Posted by Brooding Cynyc at 7:12 AM