HILL NO! THE CASE AGAINST HILLARY RODHAM CLINTON 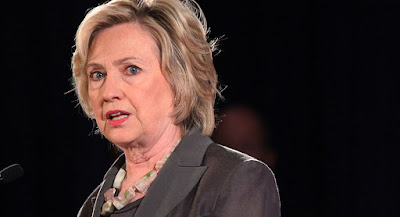 (Wednesday April 20, 2016, Brooklyn, NY) Hillary Rodham would very likely have been an accomplished successful woman in whatever arena she chose to work based on her own merits.  Born into modest privilege and raised in the upscale Chicago suburb of Park Ridge, she graduated from Wellesley College with honors in political science and went on to earn her law degree at Yale where she met he future husband, fellow law student Bill Clinton.   It would be her marriage to the future Arkansas Attorney General, Governor, and two-term Democratic President of the United States that would propel her to bear witness at the highest levels of governance and politics.  She hitcher her wagon, so to speak, to a man who would come to be known as arguably the most adept politician of his generation.  Much has been speculated and written about the nature of their relationship and marriage but, all that can be taken as fact is that theirs is a very complicated pairing.

It has been widely documented that Hillary Rodham did not take to Arkansas easily; actually she basically hated it from the moment she arrived there.  An already experienced political hand and attorney in her own right she bristled at some of the demands that came along with being the “First Lady of Arkansas”.  Far from Washington, DC where she had spent some of her college time working for various Congressional committees and as a Republican Party activist, Arkansas seemed to her to be the backwater that it in fact was; a poor, largely rural southern state with dismal prospects for the predominately impoverished populace.  She did however come to launch some initiatives dedicated to women’s and children’s issues and worked for one of the most highly regarded law firms in Little Rock, the Rose Law Firm.

After 10 years as Governor Bill Clinton threw his hat into the ring in 1991 and ran for President.  And Hillary was buckled in for the ride of a lifetime. The ups and downs of that 1991-1992 Presidential Primary season have also been widely analyzed, documented, and closely examined from every conceivable angle and perspective.  Once candidate Bill Clinton’s womanizing ways were made public in tawdry tabloid-style news conferences, Hillary famously “stood by her man” although not in the same manner as Tammy Wynette had sang.  It was that early on in her national exposure to the media and public that her character and reputation began to be alternately defined as either a submissive, docile woman truly committed to her husband or as a calculating, emotionless bitch who would exact great rewards from her hubby for not abandoning him when his nascent Presidential run was very close to being over.

TWO FOR THE PRICE OF ONE

As we all know the Clinton’s made it to the White House.  As President Clinton so famously said time and time again, the American people had gotten “Two for the price of one” meaning his intelligent wife would play a major role in his administration.  And that she did.  Not satisfied with the historical duties that befall a First Lady she insisted on being included in Cabinet meetings, policy discussions, and others realms of governance she had no right being privy to.  The position of First Lady is not an official Office; it is a figurative title vested with absolutely no “power”.  Mrs. Clinton was notoriously reported throughout the Clinton years as being dismissive at best, disrespectful at worst to the members of the Secret Service who provided the Clinton’s personal protection.  She repeatedly overstepped her boundaries regarding important policy initiatives and, likely as a carrot to get her occupied with something other than the real issues the President was working on, assigned her to craft health care legislation that would go on to be known as “Hillarycare”.  Her foray into health care reform was an unmitigated disaster.  She conducted the affairs of her committee basically in secret with no input from anyone outside her own personal circle of “advisors” and friends.    It was roundly rejected by Congress and the American people before it could even get off the ground.  It was doomed to not being able to get off the ground by virtue of its static weight; her “proposals” were codified in an almost 2,000-page document that even the most dedicated policy wonk couldn’t stand to read.  Her initiative died on the vine.  So much for Hillary’s expertise.

BUILDING A RESUME AND A REPUTATION

To say the Clinton’s played fast and loose with matters of decorum and protocol in the White House would be an epic understatement.  From early in his first term President Clinton used and misused that residence for all manner of trite political means.  Friends of Bill (FOB) were invited to spend a few nights sleeping in the Lincoln Bedroom and rather raucous parties were a strain on the Secret Service.  It did not take very long for what would be a distinct pattern of scandals to emerge and, perhaps “coincidentally”, but actually not, Mrs. Clinton was at the center of those scandals.

First came the White House Travel Office scandal involving misuse and misappropriation of funds for that Office.  The sudden and suspicious alleged suicide of White House Counsel, Vince Foster, a longtime friend of Hillary from her Arkansas days at the Rose Law Firm, soon followed.  Mysteriously some documents Mr. Foster was known to have in his possession disappeared only to be found much later, again coincidentally, by Mrs. Clinton.

They there was the cattle futures issue where her paltry investment of several thousand dollars reaped a windfall close to $300,000 dollars.  Of course the issue of Whitewater would haunt the Clintons for much of their time in the White House and it was Hillary who instigated that half-assed investment years before in Arkansas.  The Whitewater investigation would prove to be the point of entry that pried the seals away from the shields the Clintons believed they had erected years before.  That scandal would give birth to many others each of which Hillary’s fingerprints were scene.

Yes, during her years as First Lady of Arkansas and of the United States Hillary assembled an impressive resume rivalled only by her rap sheet.  She had demonstrated her mettle as the American public began seeing her for what she is; a crafty, corrupt, deceitful, dishonest, liar fueled by unbridled ambition and unmitigated arrogance believing herself to be so gifted and “special” that she can live above the law.  Imagine, if you will, her in the White House as President.  Yes, it is a scary picture made all the more concerning as it appears she has a real possibility of winning the election just seven months away.

Mrs. Clinton has been able to parlay the circumstances of her marriage into a Golden Calf that keeps on giving.  Everything she has “accomplished” since leaving the White House has been basically handed to her on a silver platter.  She has been swept ever forward riding on the coattails of her popular husband.

When the liberal stalwart of the Senate, New York’s Danial Patrick Moynihan announced his plan to retire he handpicked Mrs. Clinton as his replacement.  The carpet bagging Hillary inherited the powerful New York Democratic “Machine” as well as the vast political enterprise her husband had so ardently assembled since his college days at Georgetown.  Her likely opponent was to be former NYC Mayor Rudy Giuliani, but he was forced to exit the race before it even really began due to a diagnosis of prostate cancer.  The NY GOP had no real viable candidate waiting in the wings so Hillary sailed easily to victory.  What were her accomplishments during her eight-year tenure in the Senate?  Good question.

Her Senate seat not being large enough for her hyper-ambitious ass, she launched her presidential campaign in 2007 only to be defeated by an upstart first term senator from her real home state, Barack Obama.  Obama, another crafty politician followed the Sicilian practice of “keeping your friends close and your enemies closer” and handed to the trounced Hillary the Office of Secretary of State.  She was no more qualified for that position than is the wife of an astronaut to fly the space shuttle.  Her tenure at the Department of State was troubled from the start.  Scandals continue to transpire around her and, at some point, people began to realize that she was not a victim of circumstance but rather an incompetent empty pants suit simply not up to the tasks of that all-important Cabinet position.  She may have been the “most widely travelled Secretary of State” yet for all her air miles one would be hard pressed to name a single tangible accomplishment while the list of her missteps, ineptitude, irrational thinking, and deep lack of knowledge about the geopolitics of the times.

What are easily listed are her gross blunders; the instances of diplomatic failings, ill-advised initiatives and episodes of criminal dereliction of duty.  She was not liked or respected by world leaders and her credibility as the chief ambassador for the USA was a persistent issue in every arena she attempted to negotiate with foreign alleys, friends and foes.  She can testify to a Senate Select Committee for 11 hours a day for 11 months on end and still not be able to wash the blood from Benghazi from her hands.

Her use of a private e-mail server kept in her adopted home in Chappaqua raising questions not only about her judgment but of her understanding of the law and represents an attitude of both laxity and arrogance, another example of how she feels she is above the law.  Do we really want this type of person, this particular individual in the White House?  Hopefully the American public will not allow that to happen.  We know who she is and what she is and what she isn’t; she is in no form or fashion Presidential material.

Yes, America may be ready for a woman president but it is clearly not ready for this woman to be president.  Her un-favorability ratings are higher than any other likely nominee in the history of polling.  She is seen by huge majorities of voters as dishonest, untrustworthy, and not possessing the character to be president.  The country has the chance to once and for all vanquish this awful woman from the national stage. Let us all hope that that is precisely what happens.