YOU WANTED IT, YOU GOT IT

GOOD LUCK, MR. de BLASIO
WE'LL SOON SEE WHAT YOU'RE
REALLY MADE OF 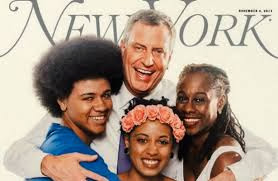 
FIRST DEMOCRATIC MAYOR SINCE 1989, HOW WILL HE GOVERN?

By an overwhelming majority that was a convincing plurality that included a coalition comprised of New Yorkers across the entire demographic strata of voters, Democrat Bill de Blasio is the Mayor-elect of America’s largest city.  There has been more than enough post-election analysis, commentating, and dissection of his landslide victory that we need not re-examine that well-trod turf.  Suffice to say that New Yorkers apparently have had enough of the Giuliani – Bloomberg Era and voted as much against the current Mayor as they did for the next.  The pendulum of politics swings at various tempos from place to place, election to election, and it has taken 24 years for the people of New York City to return a self-described “progressive liberal” Democrat to City Hall.  But the intoxicating glee in evidence as de Blasio surrounded by family, friends, campaign operatives, volunteers, supporters and the press may be short lived.  No winning candidate in any election can possibly make good on the grab bag of promises they made during a long primary and general election process spanning over a year.

Mayor Bloomberg and de Blasio met yesterday for about an hour and one can only imagine what transpired between them given de Blasio’s commitment to reverse many of Bloomberg’s signature policies and practices once he is sworn in on January 1, 2014.  While de Blasio and his family are packing for the move to Gracie Mansion and the Mayor-elect is naming his transition team, the brilliant luster of his convincing electoral victory will begin to fade rapidly as the daunting nature of the job he so desperately sought begins to become all too apparent.  The Mayor of the City of New York is often referred to as “America’s Mayor” Mr. de Blasio must first establish himself early in his term as being an effective Mayor of NYC.  Democrats across the country can celebrate in his huge victory but their support is meaningless as the day to day challenges of the job become more tangible to him.  His previous position as Public Advocate did little to prepare him to govern a City that is often unwieldy, tempestuous, and he will have to quickly learn how to prioritize his agenda.  The campaign is over, you won, Bill.  Now what?

Minutes after his inaugural speech and the photos ops are concluded the actual business of his job will begin.  Given the broad collation he assembled and handed him victory, those very same diverse and often disparate sects will begin clamoring for his attention and they will not be patient for very long.  Patience, especially among those who see themselves as members of long-suffering, excluded, ignored, and otherwise without “political clout”, is always in short supply.  Mr. de Blasio may find himself strapped into a roller coaster seat in a New York minute if he is seen as more cautious and tentative in his first days and weeks in Office than he was advertised to be.

Among the thorny thicket of pressing issues Mr. de Blasio will find himself in on January 1, 2014, includes an issue he ran heavily opposed to; the notoriously mischaracterized and misunderstood NYPD policy known derisively as “Stop and Frisk.”  (In reality the policy is Stop, Question and maybe Frisk)   His selection of a Police Commissioner to replace the highly regarded Ray Kelly will be a key indicator of what de Blasio’s policing and policy imperatives will be.  His selection will be scrutinized by the public, particularly the aggrieved minority communities, and Members of Service (MOS) of the NYPD very carefully.  It will be seen as representative of his broader agenda and governing philosophy.  In Commands, Precinct Houses and Units across the City, MOS are waiting to see who the next Commissioners will be before they decide to stay on the Job or “take the 20 and go”.  Some speculate that his appointment will be a “minority” from within the ranks or, perhaps, an “outsider” unfamiliar with the culture and history of America’s largest Police Force.  For the first time since a few months after the September 11, 2001 terrorists attacks here, there will be a new Commissioner and it will remain to be seen he or she maintains some of the Intelligence, Counter-terrorism and other security-minded initiatives in place or they opt to scale them back or eliminate them entirely.

While Michael Bloomberg’s tenure has been widely (and unfairly) criticized as being overly “Manhattan-centric”, de Blasio has promised to be the Mayor of “all of NYC” emphasizing his commitment to the plethora of issues that are unique to those who live in the sprawling “outer Boroughs” of The Bronx, Brooklyn and Queens.  Yes, there are huge income and education disparities in our City as well as significant differences in the all-important “quality of life issues”.  These have “been decades in the making” as de Blasio observed in his victory speech Tuesday night in Brooklyn and they will require a concerted effort both in and out of City Hall, within the City Council and out in the Communities still plagued  by many of the social problems they have been for generations.  The Mayor elect’s promise of a more representative government more attuned to those who have not benefited from much of New York City’s resurgence as a thriving international City and global mecca for tourists, is laudable.  The means and methods by which he opts to tackle these problems also remain to be seen.  His campaign rhetoric notwithstanding, he has offered very few specifics.  But, that is what campaigns are for these days.  Charge up your “base”, appeal to the masses, lambast the status quo and blame it for all the ills of a City of almost 10 million.

Now that the madness of the campaign is concluded we will just have to wait and see what our new Mayor will do in the first 100 days of his Administration.  The 100 day marker has been applied to Presidents, Governors and Mayors for many years and, although it is a very short window to peer through, the shadowy outlines of the future can be glimpsed.  Mr. de Blasio will name his Cabinet; make hundreds of appointments to various agencies, commissions and departments.  He will begin to fill in the blanks of many of his policy initiatives that spoke to those who voted for him.  Regardless of whom we did or did not vote for or, if we even voted at all, we can have some measure of guarded if not skeptical optimism.  Who knows; we might all be surprised.  Perhaps, pleasantly surprised.

Posted by Brooding Cynyc at 1:30 PM