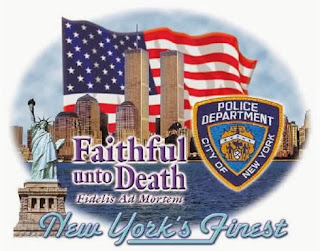 DEATH COMES IN MANY GUISES FOR NYPD MEMBERS

(Friday, November 1, 2013 Borough Park, Brooklyn)  No one stationed at Borough Park’s 66th Precinct knew Officer Robert Cedeno very well.  He had just reported for his newest Command last Monday.  He had stepped out to take a break from his tour around 5:30 and when he did not report back in by 6 o’clock or so, no one knew where he’d gone.  So new in his assignment to the 66th Precinct was he that his coworkers were not sure what kind of car he drove. They had their questions quickly answered at approximately 7:30 when they discovered him in his car parked in front of the Precinct with what appeared to have been a self-inflicted gunshot wound to the head.  The 13 year NYPD veteran had apparently taken his own life.  This is a seldom discussed occupational hazard among Members of Service (MOS) in the Law Enforcement Community (LEC). But it is sadly not an uncommon occurrence.

In the weeks, months and years after the September 11, 2001 terrorist attacks at the World Trade Center in Manhattan, the rates of suicide sharply increased every year for active and retired MOS of the FDNY, PAPD and NYPD.  It has only been within the last three to four years that the incidence of suicide has returned to pre 9-11-01 levels in NYPD where suicide rates have always been higher than in FDNY or PAPD.  There is no acceptable level of suicide for any group, agency or organization, in this case NYPD, but, as we all are too painfully aware, it strikes in the ranks and impacts the entire Department.  Each suicide is a death in the family.

Out of the most sincere and deepest respect for Officer Cedeno, his grieving family and friends, there will be no speculation as to motive.  At this time we offer our condolences and prayers while sharing their grief and sorrow.

Those who did know Officer Cedeno best were fellow Officers from the 78th Precinct in Park Slope where he had been assigned until last Monday.  To a person they expressed shock and spoke highly of a “good, dedicated Cop” who was on track for his Gold Detective Shield.  As with any suicide the questions asked have no easy or ready answers.  Everyone who knew the deceased began reassessing the contents of their last phone call with him, the last time they sat and sharing a cup of coffee.  Did I miss something?  Was there any clue?  These questions while quite normal are just too painfully wrenching to contemplate this early in the process.  Grieving and mourning are processes and they must be allowed to follow the natural flow through denial, anger, coping and, someday perhaps acceptance.  This is not the time for questions.

Fire Fighters, First Responders and Law Enforcement Officers are as intimately familiar with sudden unnatural death in all its guises, methods and modes as are Emergency Room personnel and undertakers.  They bear witness to death on a regular basis and must at times cope with the fragile nature of life and the whims of happenstance and circumstance that result in death.  By the same token it is these very same professionals whose chosen occupations that often put their own lives in peril.  While their proximity to death is close they assume the risks that come with their professions with courage and character.

In another way death brings such professionals closer to each other.  Often their lives depend on their coworkers actions.  The sense of absolute camaraderie, commitment and sacrifice is in evidence in all high risk jobs from coal miners to high steel walkers, iron workers and combat soldiers.  The reliance on each other creates bonds that transcend all superficial differences and are rivaled only by their relationships with their own spouses and families.  For some the working relationships are even more trusted and sure than their marriages.

Death, it’s been said, sometimes comes like a thief in the night.  At other times it trudges ever closer to a terminally ill patient who has been glimpsing Death approaching from a distance. Sometimes it slips through the bloodied fingers of an EMT rendering aid to a mortally wounded stranger.  No matter how and when Death comes calling it is always a difficult reality to accept.  Sudden death, untimely death that strikes literally out of the blue may be the most tragic; the deceased’s survivors least prepared for the fact that Death has come calling.  Death by one’s own hands is the most inexplicable, the most shocking when there had been no obvious signs that someone close was suffering.  Even when there may have been subtle signs, glimpses that are painfully prophetic only in retrospect, suicide delivers a punch that breaks hearts and rocks souls like no other.  The taking of one’s own life seems so monstrous in a way, so much darker and larger than any of Death’s other forms that the mystery it induces remains shockingly raw often for an agonizingly protracted time.

IN THE LINE OF DUTY

For men and women who toil in the trenches where the presence of Death looms large there comes a grudging sense of coexistence.  Some wonder what fuels such people to routinely perform what they see as “heroic” acts of self-sacrifice.  It is simply in the nature of certain people to choose such occupations and it is only by the bonds of their Brothers and Sisters that they create a unified face staring down the specter of Death.  That which outsiders or “civilians” see as heroism is for these souls routine; more than the Job itself it is how they are viewed in the eyes of their Brothers and Sisters that carries the greatest weight.

In daily reality few among us will face Death although, as is constantly demonstrated, none of us is guaranteed a tomorrow.  For the few who pass Death in the alleys and streets, in burning buildings, at horrific car crashes or in the heat of battle, they often sneer at Death’s face and go on about their business.

No one may ever learn why Officer Cedeno took his life.  Maybe, at some point in the future someone will.  At this time we can only pray for his Soul, mourn him as a fallen colleague while we remember, respect and honor his 13 years of dedicated service to our City.

It's always so hard to find words to express how sad a story like this makes you feel. How angry and how powerless. Did we do enough? Did he seek out help? Did he never give any clue to what he was thinking? I can only imagine that his friends, family and colleagues are grieving, and agonizing over why this could happen. Sometimes there are no answers but only the sense of we msut do better by our first responders. I hope we do.

It's sometimes the smallest things that can overcome someone and create a hopelessness so overwhelming as to give up on life! A move to a new and different precinct, feeling alone, feeling like he had to start all over....change is hard and especially when PTSD or other struggles in life are existing in one's life. May God give peace, strength, comfort and grace to you and all those involved on 9/11 with recovery and just simply being in the midst of all the tragedies!

All the kind, thoughtful words in the comments are appreciated. Just a small point of clarification. In no way was I implying that PTSD or any post 9-11-01 issues plagued PO Cedeno. As a 13 yr veteran he would have been OTJ for only 1 year in 2001. I mention the lasting affects from 9-11 because there have been many suicides that were directly attributed to MOS having served time there.

I want to respect his memory and honor as well as his family and not speculate as to his motive.

Thank you all for honoring him as well.

I am a good friend of his and I thank you for honoring him.
Denise B.

I am sorry for your loss. Seemed like an easy man to honor. Thanks for your kind words.