WE'RE STILL HERE
TOO MANY STILL WAITING FOR PROMISED AID 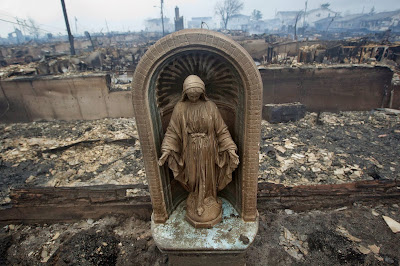 
DESTROYED NEIGHBORHOODS, HOMELESS IN TEMPORARY HOUSING FOR ONE YEAR

(Tuesday October 29, 2013 Rockaway, NYC)  The advanced warnings were ominous.  There was a storm of epic proportions and ferocity barreling towards the coastlines of New Jersey, Staten Island and the vulnerable low lying communities of South Queens, New York City.  There had never been a storm of such magnitude to strike this region at least in modern times.  While many who could safely evacuate for inland locations many more stayed to ride the storm out; in most scenarios it was the combination of grit and sense of place that kept so many in their apartments and homes even as the wind velocity roared at gale force.  This was going to be a super storm, the “Frankenstorm” of meteorologists’ nightmares.  With the images of massive destruction from Hurricane Katrina that hit the Gulf Coast and New Orleans in particular in 2005 still fresh in the minds of many there was some element of doubt that such a storm would result in comparable damage.  This is New York City, after all and, for all our attitude, bluster and idiosyncratic logic the impending surge still seemed remote.  By some act of nature other unseen prevailing forces would spare our coastline from the worst this storm, Hurricane Sandy, had to offer.  We were sadly so very wrong.

Hurricane Sandy’s wrath was felt along the eastern seaboard from Virginia to Maine but the New Jersey and New York City coastal communities bore the brunt of her fury.  She veered inland just north of New York City and carried her destruction well into the suburban counties until losing momentum and disintegrating into a defanged but still hostile remnant of what she had been just days before.

It was one year ago today that Sandy came to visit and what she left in her wake cannot be fully quantified or qualified; yes, homes and businesses can be counted but the damage done to so many people, families and psyches has not abated for many.  To this day there are hundreds living in “temporary housing”  many of whom have been waiting for the financial aid and resources the federal government assured the would be coming in short order.  A year is not “soon” by anyone’s calculations. To walk this long stretch of barrier islands and beachfront communities from Coney Island to Breezy Point, Laurelton to Far Rockaway and points in between is to walk through what had been tightly knit neighborhoods were generations of New Yorker’s were raided and had been raising their children until Sandy forever altered their lives and reality.     A ferry ride from Battery Park to Staten Island will show the same horrific chaotic landscape of torn houses, broken trees and scars left behind by the storm surge that crested there and raced inward sucking away so many homes and cars as that angry crest receded. 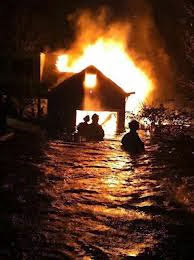 Lives were lost in that storm and many lives saved by the heroics of neighbors, friends, civil servants and strangers.  Many lives remain in shambled disarray due to the inability of the federal government to live up to its promises.  Ironically many of the most vocal opponents of federal aid for the damaged coasts of New York and New Jersey have since come hat in hand before their Congressional colleagues seeking similar aid for their home districts in the wake of floods, fires and tornadoes.  These senators and congressmen represent the worst of the worst and that they can lambast Sandy’s victims while pleading for help for their own constituents is the height of hypocrisy and immorality.  But that is all we can expect from Washington DC.  New York City alone sends far more revenue to Washington than it will ever receive in return. The  NYC Metropolitan Area collectively sends more revenue to Washington than all of Colorado, Oklahoma, Arkansas, Louisiana and Texas combined yet New Yorkers are viewed with contempt by the legislators in Washington?  That is a stunning fact and a very telling statement as to the rabid partisanship that defines our do nothing Congress.

But the strange politics of Washington are not the story.  No.  The story is of individuals and collective resilience, tenacity and character.  It is a story of neighborhoods where the small homes are passed down through generations.  These communities are home to many Members of Service of the FDNY and NYPD as well as tradesman, construction workers and teachers, just to list a few.  They are and have always been blue collar in the best sense of that term.  Their blue collar-ness is seen in their strength of character and body, in their ability to stand back up after being blindsided and bowled over.

Those who have been able to have rebuilt while, far too many wait for the promised assistance from FEMA to start the rebuilding process.  Still others will never be able to return for whatever practical reasons have cast them adrift long after the storm subsided.  Sandy dealt wicked blows to our City but, as always, we have stood back up and are stronger for the fight.

Many stories of heartache and heroism became known after the storm; many more will remain anonymously in the hearts and minds of those touched by the courage and grace of others.

The Far Rockaway branch of the Long Island Railroad is just a short siding-like jog from the Main Lines that carry commuters from the more affluent communities in Nassau and Suffolk Counties.  Traveling west back into Manhattan after changing at the hub in Jamaica Queens there are fewer and fewer reminders of the great storm that smashed as she made landfall one year ago tonight.  Arriving at the end of the line in Penn Station that places such as The Rockaways and Fire Island are part of the same City seems odd.  Although surrounded by water on all side New Yorkers seem to give little thought to our maritime past, our rich history as a port of call for immigrants, freighters, oilers and passenger ships.  We are a City like many others born of a seafaring past.  Every now and then the remnants of tropical depression will die a slow death over our City; sometimes, especially at this time of year, meteorological conditions will combine to create a potent Nor’easter , a cold air mass from Canada collides with the remaining force of a tropical storm that hugs the coastline as it moves north and drenches our City.

It is at that particular time of the year that the early morning air carries the scent of the salty water of our rivers and Bay.  The cool Autumn air takes away the smog and grit from the recently receded Summer and the salt scent is welcome; but it is a harbinger of what is to come next.  Winter will be upon us shortly and the salt will be captured by the frigid waters that will often coalesce into chunks of ice.  On this day in particular we are reminded of our precarious perch on the coastal edge of a country that spans far to the west of us.  On this special day of remembering we are all mindful of our neighbor to the east, the expansive Atlantic Ocean and the fury she can unleash.

To all of those lost, taken by the sea and surf,


By the fires and storms fury,


For all those who survived and are still coping


With the hardships Sandy left behind


Our thoughts and Prayers are with you all.

Posted by Brooding Cynyc at 5:16 AM