PUTTING A CONSERVATIVE SHOE ON A LIBERAL FOOT


FOLLOWING THE ILLOGIC OF THE FAR RIGHT WING 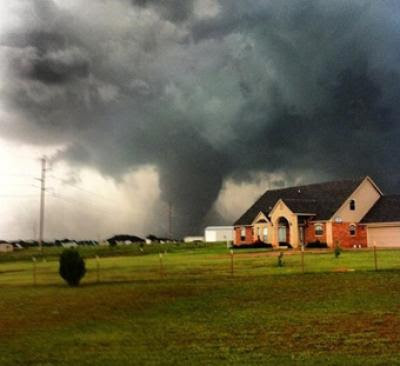 Since God is a Republican, why is He so angry with those who claim to
carry His message and all the “Red States”?


(Sunday June 2, 2013 Guthrie, OK)  Surveying the tremendous damage inflicted by the tornadoes that tore through this part of Oklahoma last week, it could be said that the devastation is of biblical proportions.  Televised images cannot do justice to the reality of seeing entire communities reduced to just so much debris.  The evidence of the fierce power of those tornadoes is everywhere; homes are just kindling, semi-trucks strewn upside down along the roads, cars tossed aside like empty soda cans.  That more people were not seriously wounded or killed by that barrage of twisters is almost miraculous.  Certainly in some neighborhoods and rural areas life and death was a matter of inches.  It’s as tragic as it is humbling to view this landscape beneath a clear blue sky.  No sane person could stand here and say that it was by the wrath of an “angry” God that this death and destruction was delivered.  Or could they?

If one was to extrapolate from a widely and strongly held belief among hardcore Right-wing extreme Republicans then it would be self-evident that God was angry about something these Oklahomans did to invite His ferocious wrath.  After all, the far Right-wing of the Republican Party has invoked the notion of a wrathful God punishing people of all sorts be they gay, lesbian, AIDS victims, abortion providers, women who have had abortions, and the host of people who exist along that dark and dismal edge of their self-righteous, God fearing, marriage protecting, anti-abortion, monogamously heterosexual, Bible-thumping, Creationists, absolutists, and sanctimoniously self-assured “real” America who know with firebrand certainty that God is on their side and that He is likely a Republican just as they so proudly are.

Idiocy, bigotry, intolerance, and prejudice, are equally ugly no matter who dons the armored coat of ideological narrow-mindedness and provincial morality.  Since the days of their spiritual hero Ronald Reagan the Republican Party has been on a hard march towards an extreme ideology that puts them further and further afield from mainstream Americans with each passing political cycle. Every time they promote yet another piece of legislation that restricts the rights of some Americans to vote, limit the availability of abortion, move to disenfranchise one group or another while espousing their moral superiority, they demonstrate their extremism with crystal clarity.

ONE NATION UNDER THEIR GOD

The Right-wing fundamentalist, evangelical element of the GOP has been on the rise since the mid 1980’s.  Lead at various times by a cast of zealots they have now taken control of that Party.  Last week former Senate Majority Leader and 1996 Republican presidential candidate, Bob Dole, said in an interview that he doubted that “Reagan or Nixon” could make it in today’s GOP.  Gone are the days of statesman who put partisanship aside and worked towards compromise and, in so doing, managed to pass many important pieces of legislation.  Once the “social issues” became the dominant rallying cry of the Right, the statesman began to vanish only to be replaced by increasingly rabid fundamentalists and single-issue candidates.

The first leaders of this march were men like Jerry Falwell, Pat Robertson and Ralph Reed.  Suddenly there were GOP factions such as the Moral Majority, the Christian Coalition, the Family Research Council, and a growing number of smaller ideologically similar organizations that eventually were absorbed into the GOP. The politics and concepts espoused by these organizations and their increasingly outlandish “leaders” were so moronic that many in the mainstream media and the casual citizen observer could not take them seriously.  But serious they were.

As they evolved in their fire and brimstone rhetoric they began to blame every natural disaster and calamity on the victims.  To them God was punishing gays for their lifestyle.  Hurricanes, earthquakes, and wildfires were sent by their God to punish people across the country and around the world in places like Haiti, Africa, and other “non-Judea-Christian” populations.  The absurdity of this belied the support such proselytizing was garnering in rural parts of America and throughout the Deep South.  The enemies were “Northern Liberals”, New York City and media elites and, of course, Hollywood.  These newly empowered Republicans saw it as a mission to wrest “their” America back from the Godless heathens of the large urban centers especially those in the northeast.  Their message began to resonate more and more as their brand of politics made it into the churches in rural America and more and more social issues were held up as “proof” that their way of thinking was the ONLY way of thinking because it was in accordance with “the words of God.”  It must be immensely comforting and satisfying, inspiring even, to know that you are doing the work of God.

What it must be like to have such bedrock faith.  If Liberals were to adopt the Conservative interpretation of the world they would surely draw the ire of the Right-wing punditry and commentators and unleash a storm of bloviating the likes of which we’ve never seen.  The hypocrisy would be epic and make no mistake about it, hypocrisy, double standards, and narrowly selective “reasoning” are hallmarks of today’s Republican extremists.  Many of the House Republicans who launched the impeachment against then President Bill Clinton were themselves ultimately forced from Office due to their own marital fidelity.  Some of the most ardent of the mega-church preachers who proclaimed homosexuality a “curable lifestyle of choice” found themselves caught up in scandalous homosexual liaisons.

What if some Democratic politicians took to the airwaves claiming that the tornadoes that roared through here last week were the manifestation of God’s ire at the people of Oklahoma?  In the wake of the historic Hurricane Katrina that destroyed much of New Orleans and the gulf coast, there were Republicans who said on air that that storm was God’s way of punishing “the gays who have an agenda” in New Orleans.  That was just a sound bite of standard GOP fare whereas if any Democrat dared to apply the same “reasoning” to the etiology of the savage storms, floods, and in some areas, droughts that have been a scourge on the “Red States” over the past several years, they’d be unmercifully castigated, ridiculed and hung in effigy.

The point is that Democrats, even the most far leftwing outliers in their “big tent” Party typically do not speak in such terms.  Even the most devout among them haven’t stooped so low as to lay the blame on God for a calamitous event that has struck in the Red States.  Oklahoma, a bastion of rock-ribbed Christian Conservatives has been enduring a wicked weather pattern that has produced a series of brutal storms.  No Democrat has stated or implied that God is somehow punishing Oklahomans.

Those elected officials most of whom spend their lives in politics have a responsibility not only to their oath of office but to thinking before speaking, to trying to employ logic over lunacy and to be ever aware that their words matter, there words reach a wide audience and have longevity in the public record.  They are not the sole purveyors of truth, be it scientific or Divine.  Using the name of God to promote public policy that is far from being “Christian” in any way, shape or form is deceitful, disingenuous and “sinful” according to the teachings of Christ.

There is also a fundamental principal in our Constitution that addresses the “separation of Church and State” that is to many in the GOP just an antiquated ideal conjured up by our feeble-minded forefathers that has no appreciable relevance today.  Once any Party, organization or group begins to pick and choose what segments of the Constitution are and are not relevant today, than the fabric that binds us as a people and as a nation with become frayed to the point of being unsustainable.  Our country was founded on religious freedom; the Constitution specifies that The State will not form or impose any religion on the people, that our freedom of expression extends to religious expression.

Matters of God and Faith just like those of morality, conscience, responsibility, choices, and personal liberties are best left to each of us provided we infringe on no one else and that our behavior is legal.  Once we are able to create ever narrower divisions among us we are well along the path to the perilous loss of coherence among us.

I don't know how you manage to put into words so clearly what I'm thinking but get too angry to say. Great column. (Are you using the Vulcan mind meld thing on me?)