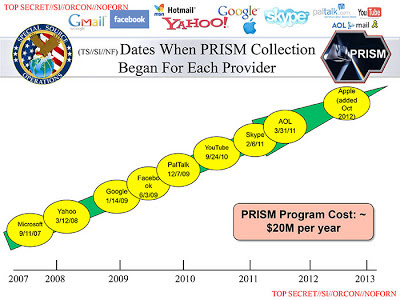 Is your Internet Service Provider part of this invasive program?

From The Brooding Cynyx Editorial Board

(Friday June 7, 2013 New York, New York)  Call it what you will; metadata sharing, data mining, data vacuuming or cyber-spying, the federal government has broken their trust with the American people.  It is that simple.

As intelligence and counter-terrorism professionals often say, their successes and victories may never be known to the public.  The nature of their operations and missions are usually so highly classified that their very existence may not be known for decades after the fact.  In the main lobby of the CIA Headquarters in Langley Virginia, on one marble wall are carved several dozen black stars each representing a CIA Officer who lost his or her life in the service of their country.  Not even in the CIA HQ are their names and exploits easily determined.  These are the men and women who function sometimes for an entire career in anonymity; Officers, Analysts, Operatives, Paramilitary Personnel, members of the Clandestine Service whose names we will never know.  Some of this secrecy is for “operational” purposes, some of it simply because these CIA personnel were tasked with orders and missions that need not be known.

We are staunch supporters of the “War on Terror” although President Obama has made that an antiquated phrase.  By whatever name it is designated we are indeed engaged globally with groups and nation/states intent on doing as much harm to America, her citizens and interests as they possibly can.  This is a war fought in the shadows and, given the technological sophistication of today, it is fought as much in cyberspace as it is in back alleys, rugged mountains, wind-swept deserts, dense jungles and teeming far off cities were our enemies live, train, plot and hide.  Our military superiority has forced our enemies to fight us asymmetrically; employing methods and means, tactics and strategies of unconventional warfare.  In many profound ways this new type of warfare is more challenging than the conventional wars we have fought throughout our history.  This is a new day and the events of September 11, 2001 ushered in new age in warfare with challenges, risks, and perils never before confronted.  The nature of the beast we fight today is in many ways exponentially more lethal armed with potential capabilities that could not have been fully appreciated prior to 9-11-01.

As New Yorker’s we know firsthand the brutality of what a small cadre of well financed zealots can perpetrate and since that bright, sunny Tuesday in September 2001, we have witnessed the increasing creativity that asymmetry dictates as our foes only effective ways and means by which to engage us.  Our Special Forces and combined military might quickly vanquished the Taliban and al Qaeda by the end of 2001 yet they remain reconfigured, smaller cells less centrally controlled yet as determined and clever as ever.  Our overwhelming conventional force decimated the Iraqi Army only to be held to a years long semi-standoff with insurgents armed with primitive Improvised Explosive Devises (IAD’s) and determination.  Our Army, Navy, Air Force, Marine Corps and Special Forces are the absolute best the world has ever seen.  But, all our military might can be at least partially, temporarily mitigated by an enemy that has nothing to lose.

Over the past two days Americans have learned that some of our government’s intelligence gathering and anti-terrorism initiatives have been more far-reaching domestically than has ever before been admitted.  These are alarming revelations on many levels; legally, morally, and constitutionally.  If anything, as Americans we hold our Rights very close to our hearts and any hint that they are somehow being infringed, especially without our knowledge and consent, creates a collective sense of distrust, ill-will, and justifiable anger.

Actually, the scale and scope of the government’s “Hoovering” efforts at sucking up all sorts of digital data reported to have allegedly not been focused on Americans, is now being widely reported to have indeed included Americans in this massive accumulation operation.  Major Internet Service Providers including Microsoft, AOL, Yahoo, Skype, Facebook and Apple have all issued press releases this evening denying having any knowledge of or participation in any sort of data sharing with any government law enforcement, intelligence or military entity. Some of their denials were so carefully crafted with very precise language that it is not a great leap to interpret them as de facto admissions. Likely, by this time Sunday the steady individual drips from these leaks will have turned into a gusher of epic proportions.

Here in New York City we have become accustomed, perhaps not pleased, but certainly accustomed to our “surveillance society”; the ubiquitous NYPD camera towers and the closed circuit cameras that number in the tens of thousands throughout our City are the perpetual “eyes in the sky”; we are never out of range of some camera for too long.  We accept this because we have lived through a few attacks and have had some potentially catastrophic plots foiled thanks to the hard work of NYPD and their Intelligence and Counter Terrorism Units.  For each dastardly plot we know to have been interrupted there are likely a dozen we were never aware of.  New York City will always be in terrorists eyes a “target rich environment” but we all have made it a much “harder target”; our individual and collective awareness cannot be overstated.

Surveillance cameras are one thing; after all we’ve been captured by cameras at ATM’s, gas stations, department and convenience stores for many years.  Actually, several recent events have demonstrated the efficacy of these cameras.  However, the revelations that hit the headlines yesterday are by several orders of magnitude much more disturbing to say the least.  From the initial report that Verizon, with over 98 million subscribers has been turning over logs of “metadata” every day to the NSA was troubling enough.  But, on top of that, the revelation that the NSA has been directly tapping in to the “central servers” of the largest Internet Service Providers (ISP’S) giving the NSA access to a wealth of private and personal data about their users, in a comparative sense, makes the Verizon arrangement look benign.  The NSA has been amassing a “mega database” by capturing everything from individual computers unique Internet address, and everything the user enters from search terms, browser information, downloads, e-mails, photographs, and all the digital media that defines so much of our lives and constitutes the very infrastructure of global networks from banks, insurers, lenders, libraries, universities; literally any entity with an Internet presence.  This arrangement seems to defy not only some of the bedrock elements of our Bill of Rights but of centuries of legal precedent that has guaranteed – yes, guaranteed  - Americans freedom from illegal search and seizure, guilt by association, and the arbitrary suspension of habeas corpus and due process under the law.

The Brooding Cynyx have long been vigorous and vocal supporters of most efforts of vigilance in our struggle against global extremists and terrorism.  We have been ardent supporters of the law enforcement community, particularly the best LEA in the world, the NYPD whose members have been toiling tirelessly to protect our City.  We have largely supported the CIA in their intelligence gathering operations overseas, been united behind our valiant troops efforts in Afghanistan and have never ceased to be aware of the fact that America is indeed engaged in what will likely be a decades long cat and mouse game with those bent on inflicting death and destruction here on our shores.  Looking over our six years of posts one can easily determine where we have stood and continue to stand on this matter of safety and security; life and death.

That said, now we must differ with our government, now we are angered and outraged by the startling revelations regarding the egregious infringements on our privacy.  We have grave concerns about how the information sucked up by the huge NSA apparatus will be used and from what other as of yet revealed sources they collect it.  That so much of our personal digital information now comprises a mammoth database is more than disturbing; it is a very frightening fact of life. It is not possible to trust that such databases will not be used by other government agencies for reasons tangentially, if at all, related to national security.  Those who argue that they have nothing to hide so they are untroubled having the government know so much about their private lives are either naive or just foolish.

Posted by Brooding Cynyc at 9:39 PM