AND NOW THEY APPLAUD 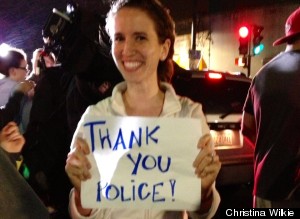 (Saturday April 20, 2012 Boston, MA)  It took a horrible high profile, mass casualty event, a tense few days of investigation and 24 hours of a real life drama including a car chase, a gun fight, a suspect on the run, a dead MIT Campus Police Officer, and a harrowing night and day of being “sheltered in place” but when it came to an end last night there was much cheering, applauding, back slapping and relief.  The residents of Boston and its sleepier suburbs Cambridge and Watertown poured into the streets shortly after the second suspect alleged to have been responsible for Monday’s Boston Marathon bombings was finally apprehended.  Maybe it was just a collective sigh of relief and spontaneous outburst of pent up nervous energy that had people here shaking hands with Police Officers and members of the Law Enforcement Community (LEC).  Indeed, there was certainly an air of sincere gratitude towards the scores of men and women in the LEC multi-agency task force who had killed one suspect and captured the other within a 24 hour period spanning Thursday to Friday night.  But, cynically, there was a dose of irony in the jubilant scene.  It is sad that it takes sensational events such as those that transpired in the Greater Boston Area this past week for people, regular, every day, law abiding people to demonstrate any thanks, gratitude or appreciation for the men and women of the LEC who protect and serve their communities.

Boston, like other big cities in the northeast has historically been a liberal city.  Urban voters across the country tend to be more left-leaning and vote for Democratic candidates with an almost blind loyalty.  Some of the most liberal members of Congress have come from northeast states such as Massachusetts, Connecticut, Vermont, Rhode Island, New York, New Jersey and many of the mayors of cities from Boston to Philadelphia have been Democratic stalwarts.   Given the liberal nature of the populations of these urban meccas there have been times when the residents of these areas had contentious, if not openly hostile, relationships with their local Law Enforcement Agencies (LEA).  Some of the oldest cities in the northeast which are of course some of our Country’s oldest, experienced dark chapters when Police Departments seemed so alienated from the public they served that the “us” against “them” mentality was endemic.

One not even need to go back to the racial strife in the late 1960’s that engulfed many American cities and in particular cities in the northeast to identify episodic occurrences when the people of certain cities seemed to actually view their Police Departments as occupying forces hell-bent on oppression of specific demographic segments of the population and suppression of some of our most basic constitutionally assured civil rights including the right of assembly and freedom of expression.

As these words are being written the New York City Police Department (NYPD) is litigating a lawsuit brought in federal court regarding the legality of their controversial “Stop and Frisk” program.  Despite New York City being the safest “big city’ in America enjoying crime rates in all major categories at 52 year lows, the suspicion and distrust towards the men and women of NYPD, particularly in the African American and Latino communities runs high.

Some of the Police Departments in these cities have their own skeletons in their closets in the form of corruption and a wide range of malfeasance but the last few decades have seen dramatic reductions in Police misconduct not only in the biggest city in America with the largest, most professional Police Department, New York City, but in Departments from Jersey City to Baltimore.  Yes, some Police Departments are still plagued by high rates of Police misconduct; Philadelphia and Camden come to mind,  but the majority of Police Departments have spent a great deal of resources, time and effort at better training their rank and file members in everything from diversity training to community policing tactics.  And the dividends are apparent where these efforts were most sincerely embraced.

The men and women compelled to seek a career in policing, be it an urban or suburban Police Department or a rural Sheriff’s agency do not enter the profession looking for attention, public acclaim, or routine pats on the back from their constituents.  Actually, most are relatively humble, decent, hardworking, conscientious, fair minded individuals who readily accept the risks and rewards of their occupation with equal aplomb.  What is difficult for many of them to accept, however, is the degree of disrespect, animus, and contempt they so often encounter even in the most trivial, routine aspects of their day to day working lives.  There are those in society who resent authority no matter circumstances as well as those who feel their personal mission in life is to “catch” Cops doing bad things.  It may be easy for the uninitiated to draw a conclusion after viewing a 32 second clip on YouTube that does not depict the scenario in an accurate light and usually does not include the sequence of events prior to that 32 second clip.  But that is the nature of our hyper-wired, voyeuristic culture.

This is not to rain on anybody’s parade.  The citizens of the Greater Boston area no doubt witnessed scenes they’d never imagined they would see play out in their neighborhoods.  Swarms of heavily armored, Kevlar-plated SWAT Teams, regular local Police Officers and military-type armored vehicles going block by block, if not house by house, in search of the second suspect in last Monday’s bombing.   It was frightening for all involved and it gave those people a brief and highly surreal, dramatic glimpse into the workings of the LEC.  It was hour by hour a vivid demonstration of the risks the men and women of the LEC are willing to take and take every day in much less high profile settings.  Every time Police Officers respond to the call of a “domestic disturbance” they never know what they will encounter as is the case with virtually any call the Police respond to.  No call is ever really “routine”.  Each time a lone Deputy pulls over a car on a dark, lonely stretch of rural blacktop somewhere in America he or she cannot be certain of what they are confronting.  Yet, approach that vehicle they do; yes, with caution, training and experience on their side, but still, a potentially volatile situation.

Members of the Law Enforcement Community across the country are killed in action with disturbing regularity and, aside from their families, friends and colleagues their deaths are marked by few others.  Collectively we are willing to pause and give thoughts when a “celebrity” or professional athlete dies unexpectedly yet few in the communities, civilians, if you will, pause or give much thought when a local Cop or Deputy is killed in action.  Some of the more cynical will say, “Hey, they knew the risks, they chose to do what they did for a living”.  This is certainly true, although the specter of one’s own mortality is a reality to everyone who dons a LEA uniform daily; they perform with valor and will give their lives to protect a stranger.  That is the long and short of it.

We should mourn for the loss of life and for those horrifically injured at the Boston Marathon bombings and we should also take a moment to recognize the unarmed MIT Campus Police Officer, 26 year old Sean Collier who was shot and killed by the bombing suspects while they were on the run as well as Massachusetts Bay Transportation Authority (MBTA) Police Officer, 33 year old Richard Donohue who remains in critical condition as of this writing. 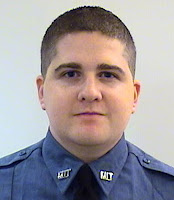 
You will forever be remembered, respected


and honored for your service and sacrifice. 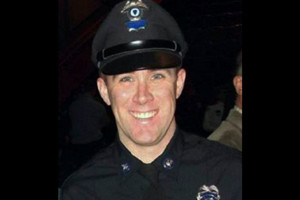 
Prayers and wishes for a rapid and complete recovery.

Thanks to all the fine men and women servicing
in the various LEA that brought the seize
of Greater Boston to an end without additional
loss of life.

Very well written. I did not know that the MIT Officer was unarmed. Such a tragic aspect to a larger tragic story. Thank you for sharing your perspective.

As always, a great read. You manage to give all points of view and draw a rational, well thought out conclusion. I wish everyone who was ranting about the supposed imposition of martial law and "warrantless" searches of local homes would read this and get a real clue.

Thank you kindly, whoever you are.