INVESTIGATION CONTINUES
NO CLAIM OF RESPONSIBILITY YET 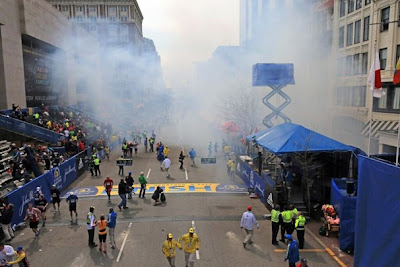 Chaos and carnage at the finish line

(Tuesday April 16, 2013 New York City)  Two explosive devices detonated within 20 seconds of each other near the finish line of The Boston Marathon claiming three lives and injuring scores yesterday afternoon.  Given the high profile of the country’s oldest running marathon the media blanket coverage began before the smoke had cleared.  The images broadcast live showed the chaos and carnage in all its gory reality.  Many of the most grievously injured sustained traumatic amputations of lower limbs apparently due to where the explosive devices had been placed.  Little is known or being revealed by the multi-agency law enforcement task force investigating all aspect of this attack.  By the Federal Bureau of Investigation (FBI) definition, the event has been classified as a “terrorist” incident.  The earliest indications are that the two devices were of a relatively “crude” design and preliminary evidence suggests that the bombs were not “very powerful”.

Despite the twin bombs apparent simple design and construct, the damage and casualties they caused was severe due to the confined space in which they detonated.  The area on Boylston Street was crowded with marathon runners, their families and friends as well as marathon officials, volunteers along with members of the media, spectators and the normal high density foot traffic of that downtown locale.  The fact that the explosions occurred near the finish line where several tents were staffed by medical personnel there to tend to the physical needs of the runners who completed the 26 mile course was a “tremendous benefit” in that there was a “large number” of doctors,   nurses, and paramedics present who immediately responded to those injured in the blasts.

As is always the case in the minutes and hours following such an unexpected emergency there was confusion as to the presence of other explosive devices that did not detonate.  A mechanical fire at the JFK Library several miles from the finish line was initially reported as a third bomb.  It took several hours for law enforcement officials to clarify the rumors that were running rampant both on the ground and in the media.  By the time President Obama made a brief televised statement from the White House Press Room at 6:10 PM EDT, more accurate information regarding fatalities, casualties, and the nature of the explosions was known.  The President conspicuously avoided deeming the afternoon’s incident as a “terrorist” attack.

In the familiar and typical fashion in the immediate aftermath of such an event, confusion, fear and panic cut a wide swathe through downtown Boston for many blocks adjacent to the scene of the blasts.  The Mayor of Boston, Thomas Menino and the Commissioner of the Boston Police Department (BPD) appeared quickly at a hastily called press conference to allay some of the fears and concerns of the citizens of Boston as well as the thousands of visitors who filled all the cities hotel rooms for the marathon.  The law enforcement response was equally rapid and all of Boston’s prestigious hospitals were able to accommodate the dozens injured, many in serious or critical condition.  One of the members of a trauma team working the Emergency Room as Massachusetts General Hospital, commonly referred to as Mass General,  who spoke not for attribution commented, “We have admitted over 20 of the people injured and have had a huge volume of people showing up to donate blood.  We actually had to turn most of them away or instruct them to go to other locations to donate.  The Red Cross, I believe, was also inundated by willing donors many of whom had run in the marathon.”

In the wake of the Boston bombing yesterday cities across the country increased security at what are considered “high value targets”.  New York City a, “target rich environment” which has been the scene of previous terrorist attacks and several foiled attempts, immediately activated one of the many Emergency Action Plans (EAP) they have developed over the past decade.  Since the infamous terrorist attack perpetrated here on September 11, 2001, the New York City Police Department (NYPD) has taken the lead in the formation of its own “Intelligence and Counter-terrorism Units” which are very highly regarded and have served as a template for many other American Police Departments.  One veteran NYPD Detective assigned to the Intelligence Unit not permitted to speak for attribution did note that, “We (NYPD) have been following the Boston incident closely and have spoken with agents from the FBI and Alcohol, Tobacco and Firearms Agency (ATF) and we have offered any resources they deem necessary.  Obviously here we have enhanced security at some of our more famous landmarks and have our Atlas, Cobra, and Hercules Units on the streets.  We take the security of our City and our public very, very seriously.  Fortunately, our population has learned some hard lessons about terrorism and they are always on a heightened alert.”

One of the most successful and effective public initiatives implemented by NYPD is the “See something, Say something” campaign that encourages pedestrians and subway riders to inform the Police if they see a suspicious or unattended package or backpack or if they notice what they consider to be “suspicious activity” particularly at the more high value targets.  NYPD spokesman commented that “See something, Say something has really paid off in dividends of safety on several occasions including the attempted bombing in Times Square in December 2009.”

No group or individual has yet to claim responsibility for yesterday’s bombing that President Obama has just within the past 3 hours designated “an act of terror.”  The list of potential suspects is long and diverse including foreign, state-sponsored elements and known terrorist organizations such as al-Qeada and the many affiliates they have spawned in the years since their deadly September 11, 2001 attack here.  There is always the possibility that the perpetrator(s) are domestic, “home grown” leftist or right-wing extremists.  The domestic element is being given careful scrutiny since yesterday was “tax day” in America and also Patriot’s Day in Massachusetts, an official State holiday.  Dates later this week are also of significance to “right-wing militia groups” since the botched FBI assault on the Branch Dividian compound in Waco, Texas and the bombing of the Alfred R. Murrah Federal Building in Oklahoma City in 1995; both of which occurred on April 19th.

What yesterday’s atrocity illustrated is the well-known axiom utilized by the intelligence community that states, “They (the terrorists) only have to be right one time, and we (law enforcement/intelligence community) have to be right 100% of the time.”  It is this common axiom that clearly illustrates the asymmetrical nature posed by the threat of terrorist.  In a society as open as ours the threat of terror, no matter its nature, is a constant.  While there have been important enhancements to security in air travel and many other aspects of our lives, it is virtually impossible to detect and intervene in such a way that every plan, plot or impending attack is thwarted without seriously encroaching on our civil rights.  Even if more stringent measures were enacted by Congress or individual states, there is literally no way to interdict in every instance.  That is why the measures that agencies such as NYPD have taken be they abundant closed circuit monitoring, aggressive intelligence collection and analysis, an enhanced visible presence on the streets or the more secrtetive operations conducted by the Intel and Counter-terrorism Units that have often drawn criticism.  The NYPD goes through great lengths to insure that all their operations are in accordance with all federal and state laws and comport with our Constitutional Rights.  Some may argue the finer points here but the fact remains that New York City has not sustained a successful terrorist attack in over 12 years and that fact is certainly not due to a lack of efforts on the part of those seeking to cause us harm.

As the various law enforcement agencies continue to pursue every viable avenue of inquiry, run down all solid leads, pour over the wealth of video and surveillance camera footage as well as conduct a thorough battery of analytics of the physical evidence, this will remain a highly fluid endeavor.  Already much has been ascertained about the two explosive devices, their composition and placement.  Surgeons have removed shrapnel and other foreign bodies from the wounded that they say is “too uniform” to have been “environmental; in other words, a component of these “pressure cooker” improvised explosive devices (IED) was ball bearings, BBs, and nails; all hallmarks of relatively crude yet effective bombs similar to those often found hidden along roadsides in Afghanistan and Iraq.

Whoever is ultimately identified as the responsible entity for this attack turn out to be, one thing is already quite obvious; they sought to gain maximum worldwide media exposure.  Some of the Boston Marathoners came from 95 countries besides the United States virtually assuring it would garner headlines around the world.   And it most certainly has met that simple objective.  Given the resources being brought to bear on this investigation hopefully, arrests will be forthcoming shortly.