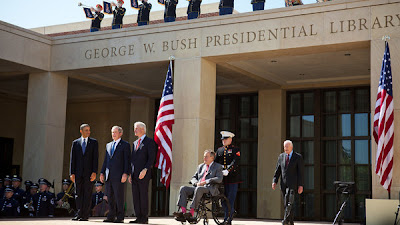 (Thursday April 25, 2013 University Park, Texas)  President Barack Obama joined with his three Presidential predecessors here today to celebrate with his immediate predecessor as the opening of the George W. Bush Presidential Library & Museum ceremonies took place here on the peaceful campus of Southern Methodist University.  The four former Presidents posed with Obama for many photographs and they all seemed to be enjoying each other’s company especially since they knew they’d only be spending approximately 90 minutes with each other.  The 41st president, George H.W. Bush, George W’s father who is confined to a wheelchair, appeared every bit the proud father if not a bit addled and confused.

A modest, subdued crowd composed primarily of Bush family supporters and former officials from his Cabinet gathered in the bright noon time sun.  Conspicuously absent was the man who actually performed all the Presidential function in the Bush White House, Dick Cheney, who made virtually every important decision while under cover as the “Vice President”.  Some Bush loyalists claimed that Cheney’s absence should not be interpreted negatively.  Former George W. Bush Press Secretary Ari Fleischer told the meager assembly of reporters, “Uncle Dick…uh…um…I mean, Mr. Cheney and the former President remain cordial.  Apparently Dick is spending some time in an undisclosed location working on his memoirs and preparing for Armageddon.  I’m sure that if Dick was not afraid he’d be assassinated he would venture out in public more.  For now he travels from bunker to bunker in Wyoming and other points out west.”

As is unwritten protocol for such events there was no mention made of just how abysmally wretched the eight year reign of Cheney/Bush was.  There was no talk of the multiple controversies George W. created and oversaw, nor any discussion of the fact that by all accounts his presidency was an abject disaster and failure.  Former President Bill Clinton did comment that now that George W has a Library he has “a chance to rewrite history”.  The comment drew modest chuckles from the somnambulant crowd.  The only flash of anger was displayed by George W’s mother and former First Lady Barbara Bush who threw what appeared to be an empty can of Diet Fanta at Clinton.  Clinton easily dodged the projectile and appeared to give Mrs. Bush the finger.

For his part President Obama was gracious and even generous in his remarks although he limited them to comments about the man rather than the president that George W. Bush was.  “If you want to know the man, then get to know the man”, said Obama.  He continued that in his estimation George W. Bush had always been a “man of his convictions, a man comfortable in his own skin, and a man who was decisive.”  The only break from the united front of harmony and good humor among the former presidents was when Jimmy Carter offered a few brief remarks and finished saying, “I’d rather be out building houses for poor people instead of standing here with these guys.  But, I probably won’t have to see any of them again until President Bush Senior dies.”  At the mention of his name, the 41st President attempted to stand up and wave to the crowd but quickly lost his balance, lost control of his bladder and broke raucous wind before his Marine escort could set him firmly back in his wheelchair.

After the speeches concluded and the photo ops were over, the former President lead a small group of close friends and former aides on a tour of his Library and Museum.  He became expansive as he looked with pride at some of the displays of nick-knacks and trinkets he’d collected on trips overseas during his eight years as President.  He frequently paused to point out a specific item and offer a story about them.  “Y’all see this here little wooden paddle?  If ya look closely ya see there’s a length of elastic cord attached to the paddle at one end and to that little pink rubber ball on the other.  You’re supposed to bounce that ball against the paddle as many times as ya can.  I’ll tell y’all, it ain’t as easy as it looks.  I think the King of Formosa or Fiji gave it to me or…um…maybe it was Larry King.  I really can’t remember just now.”  W also displayed his mastery of a porcelain yo-yo given to him by Russian president Vladamir Putin.

In a high ceilinged chamber off the main corridor there is an impressive, dramatic display of photographs from the September 11, 2001 terrorist attacks on the World Trade Center and The Pentagon.  The former President hurried through this chamber while speaking rapidly to the small crowd tagging along behind him, “Hey, y’all wanna see my baseball collection?  It’s really somethin’ else.  C’mon, I’ll show ya.”

At the end of a tangential corridor is a complete replica of his Oval Office including the desk, chair and carpet that was in his White House.  It was here in the replicated Oval Office that the former president seemed most comfortable and willing to speak extemporaneously.  “Y’all see that desk and that chair?  Well that was where I sat when I was the decider.  That is actually where I decided the things I had to decide and even had to decide what I would and would not actually have to decide about.  As y’all can imagine, I made some pretty big decisions right there in that chair except, at that time, that chair was actually in the White House.  See that little chair in the corner?  That’s where Uncle Dick used to sit and watch me decide what to decide.  We had some tough days in the Oval Office and, if I could remember them, they’d probably even seem tougher although I know they were tough but that was the kinda President I was, ya see.  I was a tough, decidin’ SOB.”

The smallest room in this impressively constructed and designed modernistic building with high ceilings and ample skylights that add the gentle hue of sunlight to the varnished hardwood floors, is the Library itself.  There are only a few shelves of books and the President, obviously without irony, proudly boasts that he had read them all, “In eight years.  Every last one of them.”  The lower shelf contains several oversized “coffee table” style books each containing many pages of glossy photographs.  There is The History of the Alamo, The History of Texas, and Great Moments in Texas History.  The former President bent down to retrieve what he said was one of his “most favoritest books”, The Illustrated History of Baseball. “Yeah, I remember reading that one while the evil doers where perpetrating all sorts of evil on our troops in Fallujah.  It used to help me relax and take my mind off things.  Cause, y’all know, a President has to have his relaxed time because the demands of the job are so damned demanding.”

There is one shelf with an impressive collection of Readers Digest Condensed Books as well as the Cliff Notes for Hamlet, Cat on a hot tin roof, War and Peace and several biographies including those of Winston Churchill, Dr. Seuss, Andy Griffith, Billy Graham and the great Houston Astros speed-baller, pitching ace, Nolan Ryan.  George W. commented, “When I owned the Texas Rangers I met Nolan Ryan a number of times.  He was a great pitcher and a nice, decent man.  When I got to be the President I invited him up to the White House to play a game of catch with me, talk sports, have a Mr. Pibb and some pretzels, ya know, manly men’s sort of things.  He never came up to visit and that sorta pissed me off.”

The former President lingered in his modest Library and stared, momentarily, off into the distance, his mind obviously filled with some profound thoughts and emotional recollections.  His eyes appeared to grow misty and he blinked hard several times, stifled a small belch, and commented, “I know what people are sayin’, I know everyone thinks I sucked as President.  Well, let the historians write the history because that’s what they write about and besides, I lived it.  I lived it and I made it…history, that is.  I know the truth about things y’all can’t even imagine.  But I can’t talk about most of that stuff because it still has national security implications and it might endanger lives or ruin careers…that sorta thing.  But we got a sayin’ out here in Texas that says, ‘There’s more than one way to skin a armadillo and it ain’t pretty but, when you gotta skin an armadillo, you just set to doin’ it.’  That’s what I did.  I skinned me some armadillos when I was President and, like it or not, there’s a few less armadillos in the world today thanks to me.”

Posted by Brooding Cynyc at 3:39 PM