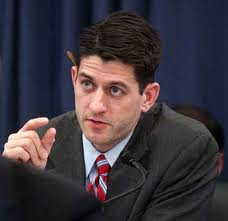 RYAN DEMONSTRATING JUST HOW MUCH HE CARES
ABOUT THE MIDDLE CLASS

(Manassas, VA – Aug.11, 2012)  Republican presidential hopeful Mitt Romney made history today when he used his selection of a running mate to actually define his candidacy.  Seen as a perpetual serial flip-flopper, a man without any core, deeply held principles, beliefs or internal compass, an extraordinarily lackluster candidate prone to gaffes, lies and evading all questions on substantive matters, Mitt the Twit chose as his vice presidential nominee Wisconsin congressman Paul Ryan, a man with an identity and popular with right wing conservatives.  As the Romney campaign has staggered and stumbled through the summer seeking solid footing and an identity that would resonate with voters to no avail, his decision to pick Ryan not only gives him a running mate but also suddenly infuses his candidacy with an identity.  The pair will now spend the remaining weeks before the November election running on the now infamous “Ryan Budget”, the plan that bears his name and has received broad sweeping criticism from Democrats and Republicans alike for its draconian cuts in federal spending particularly in areas most affecting the middle class, elderly and those most in need of the social safety net.

Romney, the man who has not been able to run on anything aside from his desire to be president has now made certain that this race will be about, for lack of a more accurate term, “class warfare”.  Yes, central to the debate is the issue of the size and role of the federal government but, at its heart the Ryan Budget and the strain of right wing fiscal conservatism that dominates the GOP, is all about implementing policies that will be friendly to the richest among us.  Theirs is just the latest version of “Reaganomics”, the “trickle down” model that asserts a rising tide lifts all boats; that by giving tax breaks to the wealthy, the so called “job creators”, by lessening federal regulations on banking, business and industry, the economy will somehow be magically “jump started”.  We have seen the fallacy of this theory in practice before.  The gigantic collapse of 2008 that cast us into the most serious financial recession since the Great Depression of 1929, was the direct result of having such lax regulations on banks and Wall Street.

There were mixed reactions on both sides of the political divide after Romney made his announcement at a large rally earlier this morning not far from here.  Hard line right wingers seemed pleased with the choice while many Democratic operatives were equally pleased.  The pleasure expressed by Democrats is rooted in their belief that once the details of the Ryan Budget become widely known to the voting public, it will be rejected.  Some in the GOP are concerned that much of the Ryan Budget will be a “hard sell” particularly among voters on Medicare and Medicaid as well as those struggling in hard economic times.

Throughout most of our history the office of the Vice President was largely ceremonial.  Typically the running mate brought something to the ticket the presidential candidate either lacked or need.  In some case such as JFK picking LBJ, the ticket achieved “balance” and a real electoral advantage because LBJ could deliver Texas for the Irish Catholic New Englander.  In other campaigns the choice is made based purely on some degree of electoral advantage the running mate will bring.  Never before in history has a presidential candidate depended on his VP pick to do more than add some punch to his candidacy; Romney needed Ryan to serve as the life support he so sorely has needed and to draw a sharp contrast with the current President.  Ryan certainly provides both.

Until very recently the Vice President had no governing power, was given little opportunity by the President to act as anything more than a mouthpiece when needed, an emissary when convenient, and a personal envoy on occasion.

Arguably, Bill Clinton redefined the Vice Presidency when granted Al Gore a wide portfolio and encouraged VP Gore to spearhead a number of vital initiatives.  This redefined Vice Presidency was taken to a disastrous extreme when Dick Cheney chose himself as the only Republican suited to be VP to Uncurious George.  Of course Cheney’s role as the head of W’s “search committee” that vetted potential running mates allowed Uncle Dick to insinuate himself into a position that ultimately developed into a shadow Presidency.  It has become common knowledge and history will definitely reflect the sorry fact that Cheney was, for all intents and purposes, the real President in that maniacal, neocon radical, history changing Administration.

The current occupant of the Vice Presidential mansion, Joe Biden, brought to the Obama campaign a wealth of experience and knowledge in areas largely unfamiliar to the freshman Senator candidate.  Biden’s 30 year career in the Senate afforded him a broad and practical education in areas from the geopolitical complexities of the day to the intricacies and nuances of working with the Legislative branch.  Biden had been the Chairman of the Senate judiciary Committee, served on the Foreign Affairs committee as well as a number of other committees and subcommittees.  He was widely respected by politicians and his colleagues on both sides of the political aisle.

Paul Ryan is a lightweight, a man only recently known for his work in the house budget committee and his hastily crafted and fiscally irresponsible budget “Plan” that has made him the darling of the right.  He is a sort of cult figure in the GOP for reasons attractive only to them.  In many ways he is about as prepared to be the President, should such a terrible circumstance arise, as was the last GOP VP pick, Sarah Palin.  Perhaps Palin was marginally better suited than is Ryan, she certainly has a larger more loyal following, could deliver votes from the Rush Limbaugh “Dittoheads”, and probably has more balls than the nerdy Wisconsonite Ryan.

Romney’s pick is just the latest of his lengthy bows and concessions to the “right wing base” of the GOP.  He has never been liked, trusted or in any way embraced by that influential petulant bloc.  In fact, until just weeks ago there were loud rumblings within the GOP that Romney might have to be dumped as their standard-bearer.  Between is millionaire, Mormon, vulture capitalist, corporate raider with off shore bank accounts in Switzerland and the Cayman Islands, to his refusal to release more of his tax returns, had the hapless Mitt drowning in overwhelmingly negative media attention.  His complete inability to answer a direct question on any issue, his failure to offer any specifics of any of his much touted “programs” that will somehow “turn this economy around” as well as his implementation of “Romneycare” during his stint as Massachusetts Governor, saw dimwitted Mitt backed into a tight corner.  His pathetic debut on the world stage where he managed to insult the British, Polish, and Palestinian people in a matter of days only further confirmed the already obvious fact that he suffers from chronic foot-in-mouth disease and doesn’t even realize it.  Yes, Mitt clearly demonstrated to the American people and the world his ineptitude, ignorance and lack of diplomatic skills or even simple common sense.

So now the stage is set, the race is clear, the issues at hand clearly defined.  Hopefully at some point the slender but all so important segment of the voting public that remains “undecided” and will no doubt decide this election, will come to see exactly what a Romney/Ryan administration would mean in real practical terms.

Posted by Brooding Cynyc at 5:00 PM