THE STUBBORN SELFISHNESS OF SENIORITY 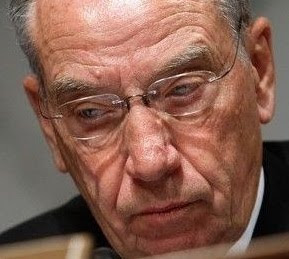 
(August 14, Winterset, IA) To spend time mingling among the relatively large crowds that gather at Chuck Grassley’s “Town hall Meetings” is to realize just how dramatically unrepresentative these people are of our vast country. First, they are all white. By all appearances they are well fed and seem not to be struggling financially. The parking lots outside these events are packed with high end, expensive pick ups, SUVs and mini vans with a smattering of big sedans.

Listening to their chatter one can easily believe that they are all very pleased with their own robust health insurance coverage. They have a great fear and distrust that somehow President Obama and ”the government” will jeopardize not only that, but their very well being.

Speaking with some, you find almost a majority to be receiving Social Security with coverage for their health care needs provided by Medicare. Some of the middle aged and older men identify themselves as “growers” (apparently “farmers” is not their word of self description any more). Upon questioning virtually every grower admits to accepting, if not depending on, federal government provided farm subsidies which include a host of broadly applied federal handouts.

Despite these facts, they are pissed off and, as their addled Senator takes the stage, it is not hard to imagine that everyone in attendance is part of the same extended family. Grassley acts like the family elder and even more so looks and sounds the part. The fact that this barely literate, nasty old man, representing a fraction of the nation’s population, has so much power in the process now underway in Washington to reform our broken health care system is stunning not only for it’s absurdity but because it is so illuminate of the tragically broken legislative process.

Grassley is in his fifth, six year term in the Senate. He is a creature and creation of that House ascending to a ranking p[position on the all powerful Finance Committee simply by seniority - he ranks and rules due to perpetual incumbency. He is not alone. Some of the Senators holding the entire health care reform effort hostage are old white men from sparsely populated states; states that are overwhelmingly white, Christian, conservative, and rural.

One common trait among Grassley and Senators such as Max Baucus of Montana, Ben Nelson of Nebraska, Mike Enzi of Wyoming, and Kent Conrad of North Dakota, is that they are each bought and paid for by corporate interests opposed to significant health care reform. Being from sparsely populated states, corrupt men such as these rely heavily, if not solely, on huge campaign donations from corporations and special interest groups. Without such funding these guys would not be able to hold onto their seats and breath the rarified air of the Senate.

This is no exaggeration or fabrication. Even cursory research into the campaign donors that support Grassley, Baucus and the others, reads like a list of leading insurance companies, for-profit health care providers and pharmaceutical giants. These huge corporations obviously spend their money wisely; just witness how these men are conducting themselves during these complex and important proceedings to remedy our health care crisis. They are staunchly defending their donors turf, spewing out lies and fear mongering to protect the status quo, to help insure that nothing will really, tangibly, practically change.

This is how the game is played.

Approaching Senator Grassley, one is first struck by just how old and, frankly, dimwitted he looks. He appears to be a very wrinkled, weary, angry, and crotchety man whose natural countenance is a scowl. As he launches into his well rehearsed spiel regarding everything “Obamacare” will do, culminating with his “pull the plug on Grandma” punch line, he seems to delight in the crowds growing anger and animation. He knows he’s among friends and seems to be eager to remind them that whatever he says while in Washington, DC, is not the “truth”; it is only here, and in small towns like it sprinkled among the endless fields of corn and soybeans, inundated with the stench of hog manure, that he can “really” speak his mind. He lies about the specifics of the plan with alarming ease. He casts himself as the protector, of the one man who can “block” this or that component of the Bill that must pass his Committee. He is a gifted charlatan, fabricator and con man who could really care less for his “constituents”. His only interest is himself and retaining his precious seat in the Senate. He delivers sufficient federal government largess to his “folks back home” that they keep sending him back to DC. It all works out pretty well for old Chuck.

It is the permanent Senatorial fossils like Chuck Grassley who pose the greatest impediments for anything positive ever being enacted for the greater good. If they can play their old, spiteful games attempting to block real health care reform than there is nothing they believe in beyond their most narrow, monied interests. That doesn’t work out quite so well for the rest of us.