CBS MIGHT AS WELL HAVE HAD KATIE COURIC INTERVIEW VICK ... 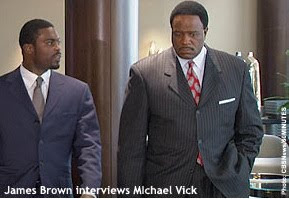 (August 17, Atlanta, GA) What former Atlanta Falcons quarterback, Michael Vick was charged with, plead guilty to and served time for were horrendous, deplorable acts. There can be no mistake about the severity of the crimes he committed. He served 18 months in federal prison and was released from a halfway house arrangement just weeks ago. The NFL temporarily reinstated him and he was promptly signed to a two year contract with the Philadelphia Eagles. His prosecution and conviction in 2007 cost him the balance of his $130 million contract with the Falcons as well as a pricey endorsement deal with Nike. The NFL will decide on his permanent status sometime around the sixth week of the regular season.

The NFL, in the person of Roger Godell, is an incredibly arbitrary judicial authority. Donte’ Stallworth, a wide receiver with the Cleveland Browns killed a man while he was driving drunk last February in Florida. Stallworth plead guilty, served 24 days in jail and is suspended from playing professional football for this upcoming season. So, the manslaughterer, Stallworth, knows his future while Vick remains in limbo. Seem a little strange?

But Stallworth is not the focus here, his sordid tale is just an aside, a point of reference out there. Michael Vick has been granted a second chance after his highly publicized fall from grace. His crimes struck a particularly sensitive nerve with the American public when the details of his dog fighting operation were revealed. Most people recoil at the thought of fighting dogs, of training to dogs to fight to the death, of beating and abusing dogs and , in this case, of murdering dogs by particularly barbaric means. ( Is the public as outraged when a drunk driver kills an innocent pedestrian? Just another aside.)

Last night Michael Vick appeared on CBS’s famous news magazine, “60 Minutes’. He sat through a real softball “interview” with the sportscaster, James Brown. (When did James Brown join 60 Minutes? Would Vick’s interview have been different if it had been conducted by Mike Wallace or Steve Kroft?)

Vick managed to mouth all the right words: he took full responsibility for his actions, expressed remorse and claims to have found Jesus. The veracity of his words are unknowable. Whether or not he was sincere he did what many athletes never do - he stood up and took responsibility AFTER spending time in prison. He now surrounds himself with handlers like media advisers, agents, PR managers and image makers. Not long ago he surrounded himself with a “posse” of his “friends” and they, ultimately, rolled over on him as quick as they could once the law came down on them. That was a mistake all too commonly made by young athletes. The NFL should put some restrictions on the number of “posse” members they allow to accompany any athlete during the season. But, that too is an aside.

Vick now is said to be working with The Humane Society, the very same group that provided substantial evidence that was used in his successful prosecution. Whether or not this is also another crass media maneuver or not there is no way to know for sure. Only time will tell but, there is some utility to it. If a young pro like Vick can reach out to younger people involved in dog fighting and so many of the other negative behaviors that go along with it particularly in hardcore inner city neighborhoods and poor rural areas, than some good will have in fact come out of Vick’s prior evils.

Perhaps the evolving saga of Michael Vick will serve as a true “learning moment” for some. All too often athletes, professional and collegiate, commit crimes, sometimes brutal crimes like sexual assault and rape and are either never prosecuted or they manage to buy there way out via high priced attorneys. Athletes are treated differently from the time they first display superior athletic talents. They learn they can get away with certain things, that other things are more accessible to them because of their athletic prowess and they can develop a skewed sense of right and wrong; a sense of entitlement and privilege. Michael Vick has paid his price to society, as it were, as is entitled to earn a living again as a professional football player, a member of the NFL.

NFL rosters are populated by all sorts of criminals. There are active players today who have perpetrated some serious offenses yet, for whatever reasons, and the reasons are as many as they are varied, they have not paid a full or any price for their crimes. Commissioner Goodell and the NFL itself should look much harder at the criminal activity and, in several cases, the gang related activity of some active NFL’ers. The League always brags about their “Security” apparatus and their outreach efforts aimed at rookies. They need to look closer at their efforts because too many players are becoming involved in far too many episodes. Granted, the NFL, just like any corporation and individual teams, just like any other employer, can only exert so much influence on their employees. Still, to be an NFL player is to be an exceptional type of employee in a very unique profession. Colleges and universities must also begin to crack down and apply meaningful discipline when their “student-athletes” commit crimes on or off campus. Just take a look at the University of Iowa football team and you will see a perfect example of an athletic program that has come off the tracks. Even the head football coach, Kirk Ferentz’s son, James, has been arrested twice in the last year but remains on the active roster. What message does this send to him and all other athletes?

There are no easy answers or quick fixes available and, if any have been implied here, it has been unintentional. Each episode is a unique case comprised of unique individuals, scenarios and circumstances. Still the discussion has begun and actually began long before Michael Vick ever saw a pit bull. The discussion must now continue.

If Michael Vick is not permitted an actual “second chance” with his football career in the NFL, that too will send a bad message to other men who serve their time, pay their debt to society and want to rebuild their lives. being a convicted felon is a serious, life long sanction the weight of which can be crippling. Hopefully Michael Vick has learned lessons and will never again commit felonious acts or crimes of any sort; that is, after all, the whole idea behind our criminal justice system as far as incarceration, parole, probation and release are concerned, isn’t it?