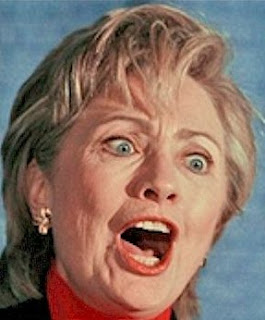 (Kinshasa, Congo, August 10) It didn’t take long, just over six months. Our Secretary of State, Hillary Clinton, showed her true character here today during a town hall style meeting with Congolese university students. Her display of anger and contempt was prompted by a question from one of the students in which he inquired what President Obama thinks about the growing Chinese influence in that country. The interpreter or the student himself made an error and Clinton received the question with her husband, former President Bill Clinton, as the subject rather than President Obama. This was too much for the Secretary to handle apparently and she shot back with a nasty, petulant rant that she is Secretary of State not her “husband”.

According to sources the student and Mrs. Clinton met after the exchange to straighten out the apparent misunderstanding. While it may have been a simple matter of a student misspeaking or an interpreter making an error, it was a very revealing moment for Hillary. If she can be rattled that easily by a student’s question, how will she perform in highly intense, difficult negotiations with foreign leaders, many of whom are not friends or allies of the United States?

This is a legitimate concern and has been even before today’s show of childish churlishness. Since her appointment to her current post as Secretary of State many foreign policy and international relations veterans and experts expressed grave concerns over Clinton’s ability to perform effectively as the Nation’s top diplomat particularly during this time when America is attempting to repair relations with many countries around the globe.

“Frankly, she hasn’t the intellect or temperament for that job”, said former Secretary of State under George H.W. Bush, Lawrence Eagleburger. He continued, “World leaders know she has her job basically as a political favor. Her entire career has been based on her marriage not her own accomplishments. Had her husband not been President, she never would have been able to buy that New York Senate seat and clearly never would have been in a position to run for President herself. She is way out of her league”.

Other veterans of the diplomatic corps and foreign relations community do not fully share Secretary Eagleburger’s rather “harsh” assessment but many feel that she is ill suited for her job. There are even some within the Obama Administration who were not very pleased when then President-elect Obama named Mrs. Clinton as his choice to head the Department of State. One highly placed adviser to President Obama commented, “Hillary was offered the State Department job as a way to pacify her. We didn’t think she’d accept it. Her ego is too inflated for that job. She surprised us all when she accepted it and luckily, we have been able to keep her out of the real heavy lifting thus far. We have Special Envoys assigned to the real global hot spots because we knew Hillary couldn’t handle them.”

Former Senator, George Mitchell serves as the Special Envoy to the Middle East where he is tasked with helping Israel and the Palestinians forge some form of a peace plan. Veteran Ambassador Richard Holbrooke holds a similar position assigned to Afghanistan and Pakistan. Both men report directly to President Obama and not to Secretary Clinton. Insiders familiar with the arrangement have said that Mrs. Clinton was “super pissed” when she was informed of Mitchell’s and Holbrooke’s agendas. “She really went berserk at first. I haven’t seen her that mad since the Monica Lewinsky thing or the night she lost the Iowa Caucuses. She threw things around, trashed her office and drank heavily for several days there after. I wasn’t sure if she’d be able to pull herself together but, somehow she did. I know it took large quantities of Midol and Valium to get her together”, said the same adviser speaking not for attribution.

Secretary Clinton is currently on an 11 day tour of countries in Africa. Her trip began in the shadow of her husband’s trip to North Korea where he was able to secure the release of two American journalists imprisoned by the North Korean’s since March 2009. The former President received widespread acclaim for his diplomatic effort although there had been a great deal of negotiations conducted “behind the scenes” prior to his mission. Sources report that Mrs. Clinton was “very much opposed” to having her husband embark on such a high profile trip.

Madeline Albright, who served as Secretary of State in the Bill Clinton Administration noted that, “I see the toll the job is taking on Hillary. She appears to be gaining weight at an alarming rate, perhaps, even more than I did. Hillary looks more haggard, wrinkled, old, and worn out every time I see her. I hear that she is drinking very heavily and is often violent with her staff. She seems uncomfortable in the job. I have always admired Hillary for going through all she did with her husband but, I clearly see that she is no Secretary of State. She even dresses worse than I did.”

Other long time Clinton loyalists are eager to offer support for Hillary as the Secretary of State. James Carville, a close friend of President Clinton and an avid supporter of Hillary’s was forced to admit that some of her shortcomings are becoming obvious in her new job. Carville stated, “Hillary is an intelligent, bright, passionate, capable lady. She was a great First Lady and a very effective Senator. I think it was a mistake for her to take the post at the State Department where she can be easily rendered irrelevant in the Obama Administration. She ought to ask Barak for a different job or just quit and become a professional blabbermouth like me. The money is great.”

Perhaps the most damaging appraisal of Mrs. Clinton as Secretary of State comes from Henry Kissinger who served in that capacity in the Nixon and Ford Administrations. Reached for comment while vacationing in Estonia, Mr. Kissinger warned president Obama that “He should immediately recall her. He should have her suspend her trip in Africa and return home at once. She is becoming an embarrassment, a big, chubby, colossal, failure as a diplomat. Most world leaders I have spoken with have no respect for her and, in particular, she has no standing in the Arab and Muslim world. She is a crisis waiting to happen. It would be in the best interest of this country if President Obama would simply relieve her of her duties as soon as possible.”