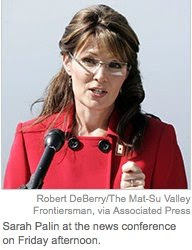 
( July 3, Wasilla, Alaska) Clearly the woman was tired, worn down by her baptism by fire onto the national political stage. Her ascendancy, apogee and ultimate waning was as rapid an arc and decline as has ever been seen in the American political realm. It took a toll on this 45 year old, mother of five and, for some reasons, the chattering class cannot and will not accept her words as honest.

Unfortunately, the majority of American’s receive the “news” not as unbiased, objective reporting but rather through the ideological prism of each media outlet. Pundits and other asinine talking heads declare their opinions on each and every move and word of a politician , for some odd reason, it is their interpretations and pronouncement that become fact for the rest of the public. The examples of this dangerous phenomenon are many; the toll they have taken on our public discourse and governance has been disastrous. Responsibility seems to be divorced from the newsertainment world which was once, what we knew as the “Fourth Estate”, the media outlets that served an important, if not profound roll, in our democracy. Freedom of Speech and Freedom of the Press were forever codified in our Constitution but, over the years, the media insinuated themselves into the headlines and story lines forever forfeiting objectivism for crass popularity.

Moments ago one of the most dynamic political personalities in years announced her resignation from office and wish to return to private life. Sarah Palin, the media star and target, first term Governor of Alaska and former Vice Presidential Candidate in 2008, stood before the assembled press and informed them of her impending retirement from politics.

Then, the trouble began.

The words of her speech were still reverberating off the lake she stood in front of when the critics opened fire. The talking heads and cables TV newsertainment blowhards criticized Governor Palin not only for resigning with 16 months remaining in her term but for what they called “a rambling, sometimes incoherent speech.” This response from the media seemed to become the truth cemented in the public’s mind by the time the Saturday newspapers hit the stands.

Let’s concede that her impromptu resignation speech was not grand political oratory, it was not a finely crafted document calling upon the host of rhetorical clichés’ and the regular tired bullshit hyperbole that seem to be essential to a political speech.

Right or wrong, due to her circumstances beyond her control and her suddenly being pushed from obscurity to the national public stage, thrust into the last months of a historic Presidential Election, she was as much a victim of the press as she was victim of her own shortcomings. Still, few politicians could have thrived in the environment, the incredible scrutiny, attention, and interest that Palin was bombarded by from her introduction as John McCain’s running mate.

It was obvious very early on that she was grossly unprepared to ever be our Vice President. But, to her credit, she campaigned often and hard perhaps recognizing on some deep visceral level that she was not going to be the Vice President because John McCain was going to get his fossilized kicked mightily by Barak Obama.

The future will produce a wide array of magazine articles, essays, scholarly works, books, cable TV specials and every other form of media today all attempting to understand Sarah Palin: he life, her politics, her decisions, ethics, accomplishments as Governor and of course her role in the GOP ass whupping of 2008. That is normal and how it should be.

For now, maybe, we just witnessed a nervous woman facing an always hostile press with some heartfelt reasons for her seemingly abrupt resignation. Everything from ongoing FBI ethics scandal rumors as well as a host of other sordid and tawdry gossip has been given weight in her decision. All of any of it may or may not be valid bit, for now, all we have are her words.

So what if they were clumsy, awkward and disjointed. Who cares that her delivery was not polished. Who can imagine the pressures she has lived with over the past 10 months and not understand her desire to have more normalcy, to fade off the stage for the time being.

Sarah Palin will have a future in public life, most likely not in elective politics, but a public role in the discourse regarding a handful of core GOP issues. She can do what she wants; anything from hosting a TV program, writing a book or becoming a spokesperson for causes she has aligned herself with. That is her business and she and her family should be allowed to return to some semblance of privacy and normality.

Maybe she will just be a footnote in history, a continuing target of contempt by pundits and bloviators of all persuasion. Comedians will continue to get some mileage out of her many awkward interview moments and the wealth of oddball remarks she has made publicly. So what.

Perhaps she has decided that she has had enough of national politics and has absolutely no intention of ever running for any Office again, let alone The Presidency. She got a good taste in a brief time of the game that steamrollers veterans and novices alike.

Good for you Sarah.

Take some time to decompress and spend time away from the harsh reality of such a high profile public existence.