OUTWARD CHRISTIAN SOLDIERS
MARCHING TO THEIR OWN TUNE 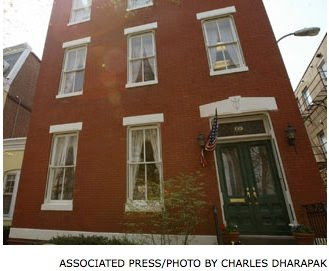 HOUSE OF THE HOLY HYPOCRITES
What goes on behind these closed doors?

(July 19, Washington, DC) It is a nice piece of property in a neighborhood wealthy people covet. Walking by it nothing about it is remarkable; just another nice, well kept townhouse in the shadow of the Capitol. The passer by would probably not give a thought to who owns it, who lives there or what transpires within. That was, up until now.

Over the past two weeks this house on C Street has come under scrutiny about not only who resides within, what goes on therein, but who or what entity owns it and for what purpose. No longer is this just another house on a pleasant block in DC. It is now the epicenter of sexual scandals reaching the highest levels of Congress and, as the scrutiny increases, it is any ones guess what else will be discovered about this Christian outpost for high powered Republican politicians.

Maybe there’s something in the water.

The house is owned and operated by a very secretive Christian group that is referred to by several names such as “The Family” and “The Fellowship” and has been described as everything from a “bible Study group” to a humanitarian organization sponsoring world wide hunger relief programs. All of this really doesn’t matter all that much until the nexus between this “family”, their house on C Street and members of Congress is called into question. Also, having some of the most high profiled adulterers in government either living in this house or seeking council from those who operate it, naturally generates suspicions of all sorts.

It has been reported by current and former residents of the C Street house that they swear an oath of secrecy, loyalty and, apparently to aide and abet any of their holy brethren who can’t seem to control the opening and closing of their zippers with women other than their wives. One former resident said that the oath they swear puts loyalty to “The Family” ahead of that to their wives. With the heavy cloak of secrecy, the hint of nefarious connections to some under belly of the far right Conservative Christian movement (for lack of a more accurate term), there now emanates an odor of more than simple marital impropriety - this entire set up stinks and calls into question not just the professional integrity of those affiliated with this joint, but also their collective morals, ethics, and fealty. To whom are they most loyal and to whose drum beat do they march or, for that matter, caste their Congressional votes?

Suddenly, thanks to the Republican members of the Senate Judiciary Committee, these are all valid questions. In a week that saw the GOP members of the Judiciary Committee grill the Supreme Court nominee, Judge Sonia Sotomayor, over everything from her ethnicity to her “judicial philosophy” often in barely concealed language of racism, sexism and white conservative southernism, the gloves are off regarding investigating all the boys on C Street, past and present and all those who are affiliated with them and their Christian crusade-ism.

It is difficult not to snicker when the likes of John Ensign, Mark Sanford and Chip Pickering, all C Streeters, are caught with their pants down. These three maggots were among the most vocal critics of then President Bill Clinton who had his own highly publicized problems controlling his zipper. It is true that the C Street house is not made of glass literally however, as everyone is learning daily, it just as well might be.

Zealots by nature are incapable of seeing themselves as they really are. Self righteousness leaves no room for objectivity. For far too long the extreme zealots of the far right wing Republican Party have monopolized everything from patriotism to fidelity, the right to life to squashing the rights of others. Principals are devoid from their yammering; ideology is the driving force, a strict ideology that allows for no objective discussions or debates, ideology as primacy.

What would the Republicans be saying if several catholic members of Congress lived in a house run a priest? How about if members of the Congressional Black caucus shared a home and had a minister residing with them? Would that not raise an eyebrow or two? Somehow, for some inexplicable reasons the Republican guard has caste themselves as being above reproach. They wear their “Christianity” as a suit of armor and their “God” is the ONLY God.

Now, the chickens are coming home to roost; the shephard must reel in his stray flock members and any criticism aimed their way is an outrage? These are some extremely strange folks with some glaring hypocrisy and contradictions being played out in the harshest glare of the 24 hour news cycle.

As it should be.

Right or wrong, high crime or misdemeanor, when Bill Clinton was served with impeachment by the Republican controled House, the notion of impeachment was forever diminished if not destoyed. Just think, had the GOP not shot their load going after President Clinton, would true criminals like George W. Bush and his boss Dick Cheney, men who blatantly violoated the Constitution during their execution of a war of their own construct, have had impeachment charges leveled against them? Here are another two messianic zealots who conducted policy as instructed directly from God. That God sure has been busy with these Republicans hasn’t he?

Zealots planted at each end of the political / ideological spectrum are equally shameful and guilty of some of the same sins, crimes and wrongheadedness. The reason there is such joy in the irony with this mind numbing fall from grace on the Right is that they overplayed their hands at every turn, were obnoxiously, arrogantly, stubbornly right - as in correct. They could do no wrong and that, fellow citizens, was that.

Well, that was then. This is now.

Copyright TBC 2009 © All Rights Reserved
Posted by Brooding Cynyc at 11:00 AM