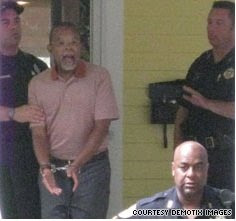 Professor Henry Louis Gates being arrested at his Cambridge
home last Thursday. Maybe Gates should grow up and shut up.


(July 22, Boston, Mass.) Considered “one of the most prominent African-American scholars” in the country, one might have thought that Professor Henry Louis Gates, Jr. would have acted professionally when confronted by a Police Officer and taken the high road after his arrest last week. He did neither. Instead of using his humiliating experience to promote an honest, forthright, candid debate about race relations with some in the law enforcement community, he has chosen to play the race card to the hilt. Despite his academic credentials and the respect among his peers, he appears to be overplaying an unfortunate event, exploiting it , and setting a very poor example for other, less prominent members of the male African-American community. The Professor has failed terribly and, his behavior leading up to and subsequent to his arrest has been shameful.

According to public records and media accounts of the incident, Professor Gates was arrested in the foyer of his home in Cambridge, Massachusetts on Thursday, July 16 at 12:22 PM. A White female neighbor had called the police to report a possible burglary at a home that turned out to be owned by Gates. Allegedly, Gates was locked out of his home upon returning from a trip to China and was ‘jimmying” the lock to gain entrance. The Police Officer who responded, Sergeant James Crowley, to the possible burglary in progress confronted Gates and was met with a remarkably deplorable reaction from the Professor. He failed repeatedly to produce identification for the Officer. Instead, he demanded the Officer’s “name and badge number” and informed him that he “didn’t know who he was messing with.” In response to the abusive, belligerent, uncooperative actions perpetrated by this world famous “scholar”, the Officer had had enough and placed Gates under arrest. All charges were officially dropped on Tuesday, July 21.

One can understand why Professor Gates was upset, even angry about being confronted in his own home by a Police Officer. He could have easily taken the high road, answered the Officer’s questions and that would have been the end of the story. He could then have chosen to make it a big issue or not, he could have publicized his experience to make a point or handled himself in a manner more becoming of his education and socioeconomic status instead of acting like a brazen street thug.

Most Police Officers in large diverse jurisdictions such as the Boston suburb of Cambridge, make an effort to treat everyone respectfully; everyone gets one shot. A question is asked, answer it. The cop requests ID, provide it. The first few seconds, that initial moment of contact between cop and citizen /suspect / unknown entity is vitally important and, most Police Officers will admit that the initial attitude displayed by the confronted or approached citizen will set the tone and tenor of the entire encounter in most cases. Sure, Professor Gates was angry but, he apparently did not even take a moment to hear what the Officer was saying, disallowing the Officer from explaining the circumstances by which he had come to be at Professor Gates’ home.

Once it was established, after Gates provided identification that proved the home was in fact his legal residence, the Officer still had questions; any cop would, regardless of the man’s color, race, ethnicity or social status. A cop would most likely be thinking: is Gates married? Was there, perhaps, an order of protection against him from his wife? Was there some sort of domestic disturbance that resulted in Gates’ being locked out of his own home and having to break in, as it were? Police Officers encounter the worst of the worst of people and see the worst in the best of people. Cops quickly learn to take nothing for granted, to be suspicious until all suspicions are allayed. Cops learn, sadly, that anyone is capable of virtually anything at any time or under given circumstances. How was this Officer to know that this man was a Harvard Professor? It appears that this fact alone inflamed Gates right off the bat. “Don’t you know who I am”? Every cop hears that line more in a week than most people will hear it in a lifetime.

Things escalate extremely rapidly when a cop is met with an uncooperative, mouthy person. Despite what at times is extremely harsh verbal abuse that can turn physical in the blink of an eye, most Officers exercise great restraint. In a City like Cambridge, the Police Officers are from the predominately racially mixed neighborhoods in and around Boston. This is not some backwater like Iowa City where the only experience most White cops have with Black people is watching them play sports. Cops who grew up in racially mixed communities are more attuned to and sensitive in, their interactions with Black and Latino citizens. This is a fact. Certainly , there are those who will beg to differ with these statements, some who will outright dismiss and ridicule them but, they are facts born out by statistics and numerous academic studies.

What the central issue here appears to be , and , if it was not, Professor Gates’ is making certain that it will be, is race. A Black man and a White Officer. Racial profiling. Stereotyping. Prejudice. Bias. Overt racism. Yes, these are all realities at times in incidents minor and major across the country. Many Black and Latino men have been victims of improper stops and searches because of individual Officers biases, prejudices and even racism. This is a fundamental issue in policing in cities across the country, one that needs to be addressed constantly and in the most positive manner possible. Gates could have turned this event in his favor but, he chose not to. That is a fact.

Although the Cambridge Police Department and Professor Gates have not been shy about releasing the facts, as they perceived and experienced them at the time of the event, no one, aside from those few present, knows precisely what transpired. There are just too many variables. What was Gates’ mood and why did he react as he did? Was the first Officer on the scene confrontational, aggressive, hostile, threatening? Only those men can answer those questions. The questions that remain and now exist out here in the public domain have no purpose other than to exacerbate the tensions that exist in places where predominately White Officers police predominately Black neighborhoods or in places where there is a growing presence of a Black “Middle Class” in historically White communities. There can be no denying that we have societal ‘growing pains’ when it comes to interracial relations and interactions.


Unfortunately, tonight during a White House Press Conference conducted by President Obama to address some of the concerns related to his health care reform efforts, the last question he was asked was about Professor Gates. President Obama said the Cambridge Police acted “stupidly” when they arrested Gates in his own home. He went on to bring up the experiences common among Black and Latino men who have had bad interactions with members of law enforcement. Perhaps by labeling the Cambridge Police Department’s reaction to Gates as being one “stupidly” handled, the President exercised a poor choice of words. It will most definitely fuel the debate rather than defuse it which the President could have done.

While Gates spent only four hours in custody, was released and received an apology from the Mayor of Cambridge, he is demanding an apology from the arresting Officer. The Officer, a veteran, Sergeant James Crowley, has emphatically said there will be “no apology” coming from him. So, this stalemate additionally assures that this debate will continue, grow murkier and more occluded since the famous Professor has decided to play it out in the gutter of racial victimization. He is also threatening a law suit and is being represented by a Harvard colleague, Professor of Law, Charles Ogletree. Nice work, Professor. You are going to play this up for all it’s worth, right? When will Jesse Jackson and Al Sharpton show up to help defend your civil right that were so horribly violated by a Police Officer doing his job?

Another question for the good Professor: you must not interact very often or well with your White neighbors if a neighbor did not even recognize that it was you breaking in to your own home. Why is that ?

It is a sad statement that in our country today, with our first African American President elected by a resounding majority, that race remains troublesome in many aspects of our lives. It is sadder still that an obviously intelligent, successful African American Ivy League Professor chose to exploit his bad experience, stir up more racial tensions, play the role of the victim so blatantly instead of rising above the immediate emotions of the moment and using his position in academia to teach a lesson. That is what Professors do, isn’t it? They teach, they educate, they help form young minds into mature ones. They instruct in reason, logic and open-minded debate. What lessons are you teaching by your actions Professor Gates? What do you want people to learn from your encounter with Sergeant Crowley?

By the looks of it you seem to want to reach back in time, to promote more racial discord, more adversarial relations between Blacks , Latinos and Police Officers. That is sad, Professor. You should be thankful that you didn’t get your teeth knocked out for being so belligerent to an Officer of the Law. Sergeant Crowley obviously displayed more restraint than you deserved.