MORE DEATH AND HOLES IN THE HOLY LAND 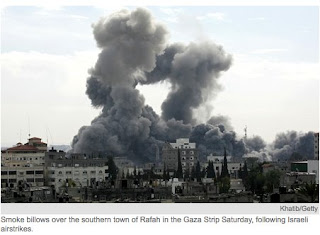 ONCE AGAIN, BRUTAL OVER RETALIATION BY THE ZIONIST REGIME


(Dec. 27, Occupied Jerusalem) Just over a week ago, a renegade faction of Hamas guerrillas, actually a mere handful of men, broke the fragile Egyptian brokered truce between the Hamas governed Gaza Strip and Israel. As always, the isolated random attacks became more frequent and Israel decided to “defend” herself. The Zionist regime chose to employ such heavy handed, brutal and disproportionate force that as of nightfall here approximately 205 Palestinians have been murdered; an estimated 350 others wounded. The Palestinian death toll is certain to rise.

As is the normal pattern of frustration borne rocket launches from Gaza and the subsequent mass annihilation in retaliation by Israeli military forces, the same ratio persists. It seems that Israel has decided that Jewish life is worth the lives of scores of innocent Palestinians; a people who have been held in bondage for six decades. This criminal ratio, the inequity of suffering, destruction and death has existed throughout the decades as well.

Israel is very adept at swatting flies with a sledge hammer, The military imbalance between the captive Palestinians and the United States supported state of Israel allows the Zionist brutality to continue despite the death toll, regardless the numbers of wounded, grieving, homeless and starving Palestinians, most of a generation who have never known or tasted freedom.

A perfect example of Israeli military doctrine regarding occasional Palestinian aggression occurred earlier this week when an Israeli F-16 fighter plane was dispatched to murder a lone Hamas gunman. How this behavior is tolerated by the world community is beyond belief. The blood on Zionists hands must be shared with the USA who has steadfastly maintained virtually unilateral, unwavering, albeit biased, proud backing of the barbaric Israeli government since Israel’s birth; a birth, by the way, that was born out of the same type of “terrorism” the Zionists so eagerly classify the acts of a few Palestinians.

The intractable issue at the heart of this protracted conflict is not HOW to attain a state of peaceful coexistence between Zion and Palestine but rather WHEN will enough Palestinian blood been shed that the world as one voice will declare “enough is enough”?

TBC greatly acknowledges The Washington Post, The New York Times, al Jezeera and Alarabia.net for providing some of the sourcing for this post.