ON THE WATERFRONT : OUR DEAD WAIT


SENTINEL OF LIFE AND DEATH 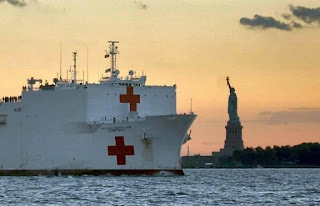 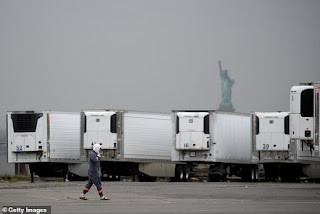 FROM THE HOPE OF COMFORT

ORIGINALLY POSTED MAY 8 TBC. (UPDATED LINKS)
(Friday May 8, 2020 Pier 39, Red Hook, Brooklyn) Since October 28, 1886 our Statue of Liberty has proudly stood in New York harbor and has bore witness to much of Our Nation’s history.  She has served as a beacon for immigrants, a colossal monument to our founding principles, and at times, as a silent witness to the good and bad times of our City.  Around the world she is recognized as a singular representation of the United States of America.

On Monday, March 30, Lady Liberty provided a dramatic background as the USN Comfort, a Navy hospital ship made her way slowly to Pier 90 on the Westside of Manhattan providing as many as 500 much needed beds for Covid-19 patients. As of that Monday morning New York City had verified 38,087 cases of the virus and a death toll of 914.  Those numbers would tragically rise steadily as March gave way to April.  The “City that Never Sleeps” was a veritable ghost town except for the long snaking lines of people waiting to get into emergency rooms from the Bronx to Brooklyn. By April 21 the USN Comfort departed having not been utilized as promised for reasons that are difficult to understand given the crush on NYC emergency rooms, ICU capacity, and hospitals in general. She arrived with much hope for the beleaguered, overburdened City Hospitals and seemed to sail away as an afterthought.  Perhaps the lesson of the USN Comfort is but a metaphor to the Covid-19 response locally and, particularly, at the federal level. (This is not a political statement, opinion, or partisan talking point.)

While so much remains to be understood about this virus that has gripped the world in a pandemic, Epidemiologists, Virologists, Infectious Disease physicians, Respiratory Therapists, Laboratory Technicians as well as scores of public, private, and academic labs are laboring to break some of the most vexing puzzles given that it appears Covid-19 is more than a “respiratory infection”.  It often presents in unusual ways and can vary in exactly how it behaves differently from patient to patient.  The one absolute certainty is that it is deadly; it can kill swiftly or it can have a patient linger on a ventilator for weeks on end until such time that the intubated patient succumbs. It can strike with vicious rapidity in patients with pre-existing conditions, the elderly, and those with a compromised immunity. It has claimed lives in younger people in good health, physically fit by most metrics.  There is far more unknown than known about this virus that all the efforts of researchers and clinicians will not yield anything like a therapeutic or a vaccine any time soon.  It is here to stay.

New York City was the epicenter of the pandemic in the United States. It hit us hard and fast and became a major medical emergency throughout our Five Boroughs before large swathes of the Country had even become alert to it.  Viral particles spread, prolifically propagating as they jump from host to host.  Once it infects a person it hijacks that person’s cellular physiology, makes its way into the cell nucleus, and thrives within. In this molecular level hostile takeover, the virus utilizes the cell for its own malevolent purposes. As the immune system responds there comes a series of inflammatory reactions each alone clinically difficult to manage; collectively, they can be fatal.  Viruses in this class are exceptionally contagious, very tenacious and resilient in the air and on nonporous surfaces.  Social distancing quickly became the mantra and wearing face masks covering our nose and mouth soon thereafter became highly recommended. New Yorkers by the tens of thousands became shut ins; “sheltering in place” as if a gun toting maniac was prowling our streets.  This novel Corona virus was able to do in short order what no maniac or terrorist could; it rendered the most densely populated City in America a veritable ghost town.

EYE OF THE STORM

As more and more of Our City became shuttered, there was an eerie calm in the concrete canyons. The FDNY-EMS and NYPD had little reason to respond to a call with sirens and airhorns – there was no traffic, they had the streets to themselves.  The only locales of activity were the hospitals many of which were seeing alarmingly escalating Coronavirus cases.  Supplies from PPE to respirators, sanitizers to IV tubing, to the whole array of equipment necessary to care for ICU patients became less available by the day.

The nature of this disease didn’t allow for the most gravely ill to have visitors; no family members to accompany their loved one when their time came to step over to the other side.  More doctors, nurses, technicians, EMT’s and Cops were the last mask-covered faces they would see during their final moments as sentient beings.  And then the bodies began to pile up.

Funeral homes were overwhelmed.  Social distancing precluded memorial services in churches, synagogues, mosques, and other houses of worship.  Next of kin typically never laid eyes on their deceased again once they were admitted to a hospital.  Even graveside services were curtailed.

By early April bodies of victims that were “unclaimed” began being interred in mass graves on Harts Island, the historical home of NYC’s “Potters Field”.  FEMA began sending 53-foot-long refrigerated semi-trailers to some of the hardest hit hospitals including NYU, Bellevue, and Elmhurst.  Bodies were found in U-Haul rental trucks besides some funeral homes in Harlem and Brooklyn.  These had become among the grisly agonies of reality in Our virus ravaged City.

As the number of cases continued to rise each and every City Agency could count Members of Service among the ill and dying.  From the FDNY to NYPD, the Department of Corrections to Sanitation, Transportation and Education, Nurses and aids of the Union 1199, and so many others were lost often leaving their surviving colleagues depressed, disheartened, and worried.  The environs these people worked in posed a level of danger and stress that had never before been so pronounced.

UP TO THE CHALLENGE

As native New Yorkers we have a global reputation of toughness.  As children born into the most complex urban metropolis in America, we simply grow up as products of our environment. Personalities and traits that outsiders see as rude are but our inherent genetic expressions. We as a City, as a diverse, sometimes disparate population have always united during the hardest of hard times.  We’ve squared off to confront every challenge, crisis, hardship or threat.  We are doing so at this time just as we have never failed to do.

Perhaps some among us are praying more than usual.  Certainly, every other New Yorker who might be reading these words has had to take a momentary pause when we learned of an extended family member, neighbor, coworker, acquaintance or familiar face from our daily coming and going having passed away.  Many of us have a profession that comes with higher than normal inherent risk; some of us may reflect on our own mortality, the circumstances and happenstances that shadow us every time we show up for work.

Our City will soon slowly but surely begin to reopen.  Day by day the traffic will increase, the flood of pedestrians will flow, and all the familiar sights and sounds that define life in Our City will again be present.  That will be a good thing for us all.  But maybe it will be wise to hold onto a few of the facts of life we have learned since this plague invaded Our Town.  Maybe not.

Bless All, Good Luck, and Be Well

Posted by Brooding Cynyc at 2:58 PM