18 YEARS OF INJUSTICE AND INSULT TO INJURY 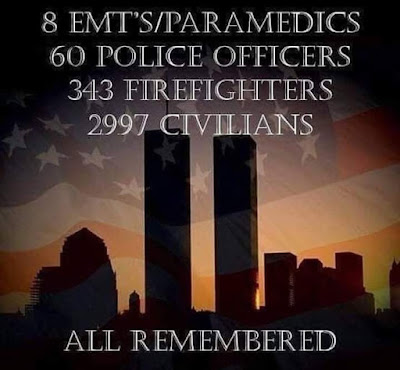 (Thursday September 5th, 2019 Trinity Place, NYC) It has been 18 years.  Not that any of us in the 9/11 Community need any reminder.  No, each and every one of us who raced to the Twin Towers moments after the first hijacked plane struck remember all too vividly the sights and smells of that atrocity.  Most of us can still taste it today.  Those fiendish toxic clouds created as our Towers collapsed one after the other.  Ours have been 18 years of anguish and agony – grinding sorrow in its most profound manifestation.  Families still grieve; grief knows no timetable, no expiration date.  It has no end point, there never comes a time that it is “supposed” to end.  The addition of raw anger and the gut-wrenching ironies that have defined the last 18 years for so many of us is but an additional cruelty, an insult dealt by our own federal government.


How many years did we have to fight for funding the medical care that so many of us desperately needed as we faced respiratory ailments, strange malignancies, and the myriad illnesses from the toxins inhaled while working on “The Pile”, in “The Pit”, at “Ground Zero”, whatever one prefers to call that hellish landscape of twisted structural steel and debris. Those MOS sifting through debris at Fresh Kills on Staten Island also became ill.  How many among our Community died after valiant battles with cancers?  How many were lost before the proper funding became available or a medical panel “decided” what diseases were and weren’t classified as 9/11 related?  While the exact number may be unknown what is for certain is that the number was far too high.


While we had to fight for our medical care, the actual legislative maneuvers engaged on behalf of us all by men like John Feal founder of the Fealgood Foundation, Ray Pfiefer retired FDNY, NYPD Detective James Zadroga and Jon Stewart were successful only after shaming Congress to do the right thing. Actually the bill that will provide the requisite funding of the "Never Forget the Heroes: James Zadroga, Ray Pfeifer, and Luis Alvarez Permanent Authorization of the September 11 Victim Compensation Act" was only passed by the Senate and signed into law at the end of August 2019; 18 years after the fact. Yes, in the aftermath of 9/11/01 all MOS were suddenly “heroes” and were recognized for their valor for doing what they do on a daily basis day in day out in anonymous scenes and scenarios throughout the Five Boroughs. The world bore witness to MOS of the FDNY, PAPD, and NYPD doing their jobs.  Sadly, it took such a monstrous tragedy and loss of life for the public to have a glimpse of the collective character and individual bravery of the men and women who constitute these Agencies. Politicians promised all those negatively affected, sickened from their efforts would be “taken care of”.  What a crock of shit that turned out to be. Their hollow promises faded just as fast as did the makeshift street memorials all around the City. It took a man, a gravely ill yet extremely strong man, Luis Alvarez of the NYPD Bomb Squad, sitting in front of members of Congress telling the long story of how his illnesses left him ravaged.  He would be dead just 32 hours after that appearance.  That is beyond shameful.  But that is not the end...  Now comes the irony.


As has been widely reported recently the Pentagon is finalizing plans to expand the facilities at the Detention Center that has housed up to 610 “enemy combatants” since 2002.  Originally intended to be a temporary prison for those captured on the killing fields of Afghanistan, the Tora Bora region of Pakistan and later insurgents from Iraq, only 40 remain held there.  The classification of these terrorists and Islamic zealots as “enemy combatants” was made to avoid having them claim their rights as codified in the Geneva Conventions. The legality of having these detainees on US soil seems muddled and murky. All things aside these men are in our custody and we are responsible for their care as well as their mounting health care needs.   According to the Pentagon’s own discussions regarding GITMO, they are preparing to transform it into a geriatric medical/prison facility at a cost of over $88 million. It should also be noted that many of our Military troops assigned to GITMO reside in substandard living conditions basically unchanged over the last 18 years.


While the 9/11 Community was fighting our own Congress tooth and nail for funding of the SVCA the detainees have been receiving the best medical care our Military can provide.  On numerous occasions the physicians serving at GITMO have had specialized surgical teams from US bases in Homestead, Florida, Norfolk, Virginia, and other locations.  They have been flown in with their specialized equipment to perform surgeries ranging from spinal fusions to joint replacements. The expense of these services has been astronomical all things considered.


The Pentagon has been a bit fuzzy in providing accurate numbers but a common figure of $11 million is what it costs, on average, to house each detainee. What a miserable slap in our collective faces this is.


As the detainees have aged so have we. Some among us have begun to move on in baby steps while others remain paralyzed in their grief.  There are those who may protest that this is not the time to write about anger towards the detainees, but we must counter that this is precisely the time.  The admixture of grief and mourning laced with seething, festering anger is a toxic vapor that impedes our ability to put some emotional distance from 9/11/01 to this day and beyond. Yes, it has been 18 years but no amount of time can ever fill the voids in families across the tri-state metro area, no passage of years can extinguish the fires and billowing clouds that choke us in dreams.  But we all must continue to soldier on, allow our memories to become planks of living history we have the sacred responsibility to share with younger people.

Posted by Brooding Cynyc at 3:53 AM