HONORING THE PAST: FIERCELY PROTECTING THE LEGACY


THE STOIC SENTINEL OF THE NIGHT:
THE GLEAMING GUARDIAN OF THE DAY 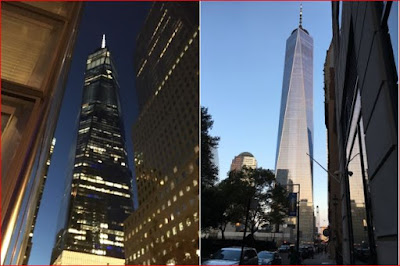 (Monday September 11, 2017, Vesey & West Streets.)  The sun had yet to break dawn as this part of our City was already a hub of activity.  Red and blue lights strobed from numerous NYPD vehicles cast their glows across the glass and steel facades of Brookfield Plaza and the adjacent buildings.  A bagel joint across Vesey Street was doing a brisk business as dozens of uniformed NYPD MOS waited for their coffee.  There were enough retired Cops to be seen some of whom work as armed security officers for private concerns; others milling about having come to this place on this day for what has become, over the last 16 years, to be an annual ritual of commemoration, memorial, and remembrance.  The soaring Freedom Tower that rises from its square footprint of ultra-fortified concrete and steel concealed by a layer of prismatic glass whose flat-planned surfaces stretch to merge as a perfect square, 1,176 feet above the ground atop the multifaceted structure seems to stand as both silent sentinel and vanguard in its semi-lighted predawn state just feet north of the twin reflecting pools that were the original footprints of our majestic Twin Towers.

At the southwest corner of Vesey and West Streets a narrow gap in the steel barriers was the entryway into The Site, the hallowed ground that would host the family members of the deceased, the comrades of the fallen MOS, and the requisite pipers and honor details that would begin today’s ceremony at 8:46, the time 16 years ago that the first hijacked plane hit the North Tower.  It would take well over 3 hours for the families and friends of those so abruptly taken from us to read the names of the dead.  It was as somber a mood today as it has ever been and as long as this core of people from throughout the Tri-State Area live, it shall always be so.

The entry point was manned by young men and women wearing the light blue shirts and caps logoed with the “9/11 Memorial”.  A cluster of Police Officers stood closely by as those special attendees wearing small blue lapel ribbons, some carrying flowers and photos of a lost spouse, child, or parent made their way towards the small stage erected between the reflecting pools. Police buses soon arrived carrying hundreds of FDNY MOS wearing their dress uniforms; on one shoulder the official patch of the FDNY, on the opposing shoulder the unique patch of their “House”; Engine, Ladder or Rescue Company.  It was this elite Corps of civil servants who’d lost the most on that infamous day; 343 of their ranks perished on this ground.  Yes, this was indeed hallowed ground perhaps the most sacred acreage in all of New York City.

Many of the uniformed MOS of FDNY and NYPD could be heard telling their own brief stories of September 11, 2001.  Most had been in grade school, others in high school, some barely old enough to fully comprehend the magnitude of the events that would perhaps alter, if not guide, directly steer their lives into their chosen professions.  Many of the older guys, some still active, other happily (still others not-so-happily) retired shook hands and hugged.  Their tales were told in tones that could not be overheard. Some of these men were fighting the lonely battles of ravaging malignancies from exposure to toxins in the airborne dust and debris during their time spent over the months of the “Recovery”; that horrifically daunting undertaking that was both painstakingly respectful and massive in scale and scope as they searched for human remains amid the clean-up after the fall of our Towers.

Today was a day eerily similar to that bright Tuesday morning.  This morning’s sky was a cloudless pale-blue; the sun rose swiftly and with it the temperature with a tepid breeze whispering through the juvenile trees and flying flags. At 8:46 the City became uncharacteristically quiet and calm as a chill raced along the spines of all in attendance.  Even the throngs of tourists pressed along the barriers seemed hushed as if osmotically affected by the collective mood of the moment and those paying their deepest respects.  The proceedings unfolded as the sun rose to its noontime peak momentarily banishing shadows from The Site.

As the ceremony drew to a close and many among the gathered lingered at the reflecting pools, streams of MOS filed out crossing West Street to board buses or seek out a tavern.  This being the neighborhood of high finance, banking, and brokerage with building lobbies lined with ultra-high-end retailers, there was not a regular bar within easy walking distant.  Many of the thirsty found themselves in PJ Clark’s in the South Lobby of Brookfield Plaza overlooking the marina.  A few MOS from Engine 44 sat mid-bar as more of their brethren shuffled in.  The mood was quiet, respectful if that word can ever be appropriately applied to a barroom atmosphere.  Some local workers were eating lunch and it seemed that they were all buying drinks for those gathered at the bar.  The drinks were cold, beer served in chilled steins, and the unconscious strain of the day began to loosen.

Talk soon turned to responsibility. It was obvious to the older guys that a new generation now occupied the ranks of the FDNY and NYPD.  Men were now FDNY Officers at younger ages than their predecessor’s due to the ranks having been decimated on 9/11.  Both proud Agencies have long, storied histories, respected institutional memories, and remain the premier Departments of their kind nationwide if not around the world. Some expressed concerns regarding the integrity of the memories of that day and the days that followed and how vital it was that they be preserved…preserved and passed down, accurately, just as they happened. Individual stories of bravery, courage, duty, and sacrifice could not be permitted to hazily drift into exaggerated legend although many a legendary MOS gave his and her all as they breathed their last.  The tales are what they are, true accounts of action taken in confidence and with purpose; those who tell them have the obligation to maintain the purity of the telling; each tale represents the ultimate sacrifice and so many of the tales are known only to God.

It is a bit disorienting to be in this part of town even for a native son.  The complete transformation and reconfiguration requires a moment for one to get his bearings.  Certainly, the images from 16 years ago are not easily juxtaposed on the glistening tableau of towering edifices born from the fires and ashes of the unimaginable horror of the demise of our Twin Towers.  It had been unimaginable but we lived to see that horror and for many, perhaps more than whom readily admit it in unfamiliar company, continue to see, smell, taste, hear and feel it on nights when sleep is elusive or troubled.

As the rush hour exodus began most of the gathered began to scatter.  Men made their usual rides back to Nassau, Rockland, Orange, and other counties east and north.  Some boarded subways to continue to have a few belts in more familiar watering holes near their Houses and Commands.  The day was somber and the drinking likewise subdued.  It was not the reckless distortions of recollections most sought from the alcohol; they simply welcomed the warmth of the liquor and felt some of the day’s inherent tension lift.

The sun over New Jersey cast the Freedom Tower and her dwarfed neighbors shinning like mirrors.  It was in this daily movement of our planet around the sun that played on the surfaces of the Tower in the timeless regularity that the tides ebbed and rose in the harbor so close by.  In time, real cosmic time 16 years is the blink of an eye.  In the span of our lives 16 years is no trifling chunk of days, weeks, and months. We progress from young men to middle aged, we watch are our children sprint from grade school to college.  We see the signs of age in our faces as we shave and feel the labor of the years in our joints.  But on this day, we pause, we pause and remember our lost as they were forever frozen in time at the age they were taken 16 years ago.  They haven’t aged in Heaven; surely one gift of Paradise must be the cessation of aging.  Temporal hardships and strife are behind them and they bask in the Warmth and Light of the Comfort of The Lord.

This year we close with a version of El Maleh Rachamim a Hebrew prayer for the rest of the departed.

God, filled with mercy, dwelling in the heavens' heights, bring proper rest beneath the wings of your Shechinah, amid the ranks of the holy and the pure, illuminating like the brilliance of the skies the souls of our beloved and our blameless who went to their eternal place of rest. May You who are the source of mercy shelter them beneath Your wings eternally, and bind their souls among the living, that they may rest in peace.
And let us say: Amen.