THE PERILS OF POLITICAL CORRECTNESS


THE COSMETIC REWRITING OF OUR PAST


HISTORY IS LINEAR, OUR THINKING NEED NOT BE 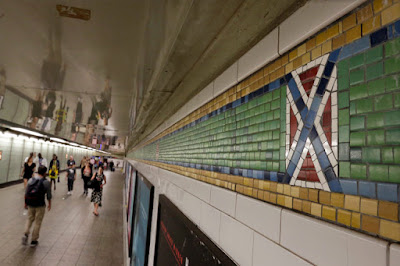 The mosaic tile design, meant to represent Times Square’s status as the “crossroads of the world,” in a subway station on Friday.


Transit officials have decided to alter the design, which has been compared to the Confederate flag.
Credit Richard Drew/Associated Press

(Saturday August 19, 2017, Henry Hudson Park, The Bronx, NYC) To native New Yorkers Times Square has had many differing distinctions.  It is a world-famous landmark, the literal intersection of major surface arteries, the “Big Bow-tie”, The Great White Way and the Crossroads of the World.  It anchors our flagship Borough and has been widely celebrated in prose and song.  Beneath the glitzy facades of this latest “Disney World-esque” iteration the real vital arteries of our City course through a subterranean complex of subway tunnels, station platforms, and walkways.  Ours is the most famous subway system in the world and the most heavily traveled in America with over 4 million riders a day commuting to and from here and there.


As harried commuters, we don’t often have the luxury of admiring the ornate intricate mosaics of tile-work that line the underground walls and station stops.  But there are off-peak moments as we wait for the train that we might glance over at the adjacent platform and appreciate all that beautiful tiling artistry. Some of the finest work of this kind can be found among the oldest stations many of which have been restored over the last 20 years to their original vibrancy.


In light of recent events across the country where statues, monuments and other forms of visual representation of famous (or infamous depending on a host of personal variables) men from our unique history have created a backlash.  Certainly, the most controversy centers around memorials and monuments to military figures from our Civil War that are splashed across the Deep South and border states; the old configuration of the “Confederacy”.   But here in New York City, perhaps the “Heart of the Union” we are home to hundreds of statues and all other pieces of art depicting great men from our City’s history, our State’s history, as well as the history of our Country since its inception.  The growing protestations surrounding all such representation now extends not only to piece of commemoratory art but also to names of neighborhoods, streets and landmarks throughout our Five Boroughs.


From this vantage point at 227th St and Henry Hudson Park it seems ludicrous that the efforts of some to create a nation governed by “Political Correctness” have no bounds in their militant desires towards that end.  Henry Hudson the 17th century explorer is now being cast by some along with other of our most notable historical figures as “criminals” and “exploiters of Native Americans”.  The current political climate and the Trump Presidency have been cited as catalysts for the many various protest groups and all those who wish to rewrite our nation’s history by eradicating any symbols or semblance of recognition of the men who so profoundly shaped our history, in all its often-inglorious imperfections.  And now part of that fight includes a mosaic in the Times Square subway 40th St entrance and is repeated for several lengths of that corridor that, to some, bears an uncomfortable resemblance to the Confederate battle flag.  This thinking, the creative extrapolation of an ideology erroneously, carelessly juxtaposed on a truly neutral piece of work or other form of free expression, represents a real and present danger to the fabric of our Democratic Republic.


THE COSMETICS OF REWRITING HISTORY


The events of the past week indicate a national Rorschach Test along the regional/political/ideological fissures impelling the debate about Race.  It is laughable however to witness the mass media “grappling” with issues including “moral equivalency”, “White supremacy/nationalism”, and the fitness or unfitness of President Donald Trump to “faithfully carry out the” complex duties and staggering responsibilities of his Office.  The debates raging on many and varied fronts have come to completely obscure the very real demands of governing not only by our President but by our abysmally inept, Congress as well.  There has been no oxygen to support any semblance of a “Trump Agenda”; the only forces flowing through Washington DC are the vile and vitriolic long standing competing narratives of our nation’s racial history.


Anyone with even the shallowest familiarity with current events and the “news” knows most of the particulars of how a protest against the removal of a statue of Robert E. Lee from a local park  in Charlottesville, Virginia by members of the “Alt-Right” and semi-fringe various groups constituting a coalition calling themselves “Unite the Right” turned violently ugly on Friday August 11th.  The following day a counter-protest of sorts coordinated by a similarly loosely connected movement known as “Antifa” (short for anti-Fascism) also turned violent and fatal after a marcher was killed by an auto driven by an avowed “Alt-Right” member.  These events triggered a cascade of demonstrations, marches, and protests on all sides.  Throwing rhetorical gas on the fires already blazing, President Trump in his notoriously inelegant, clumsy, off-the cuff remarks during an unusually combative confrontation with the press in the lobby of Trump Tower in NYC on Tuesday ignited a firestorm of outrage from all quarters.


Apparently, the President did not sufficiently excoriate “Neo-Nazis”, White Supremacists, White Nationalists, and their associated groups to satisfy the press.  Soon politicians were crawling out from under the rocks they live in while Congress is on recess to blast the President.  Quickly the Trump Administration was engaged in a full-frontal assault from the blatantly hostile press and self-serving politicos alike.  Various business titans and CEO’s appointed by the President to serve on a handful of advisory boards began bailing out claiming they could not support the President any longer.


THE ANCHOR OF HISTORY


The pace of the world has accelerated dramatically over the last 20 years.  Around the globe there is conflict and turmoil, instability, wars, and unprecedented humanitarian crises.  It seems that each day (or news cycle) that we are sailing blindly through turbulent uncharted seas.  One of the many purposes of history, or preserving the lessons from our collective pasts, is to provide context and perspective; everything old is new again and in the annals of history lay the nuggets of wisdom that can produce solutions to the problems that roil not only our society but the world community writ large.  Many of the memorial sites, monuments and other depictions of important events and people from our past bear the inscription “Lest We Forget”.  This simple three-word phrase itself carries the wisdom of the ages; those who forget the past mistakes are doomed to repeat them.


There is a cyclical element to history.  Surely the times and the people, societies and cultures are continuously evolving often at break-neck speed yet we can usually locate historic corollaries, eras of similarity that are endowed with a specific gravity that might serve well in the present.  Yes, history is linear.  Our thinking need not be.  The anchors that moor our past firmly to the shore of reality need not imprison our thinking today and for all our tomorrows.  The past does indeed hold timeless wisdom but it often takes careful examination to ascertain its current relevancy.  What we choose to remember and revere are not necessarily one in the same; distinctions can be drawn while maintain a steadfast hand on the helm of current relevance.  But it is a fool’s errand indeed to make any attempts, no matter how cosmetic or “noble”, to divorce ourselves from our past.

Posted by Brooding Cynyc at 2:00 AM